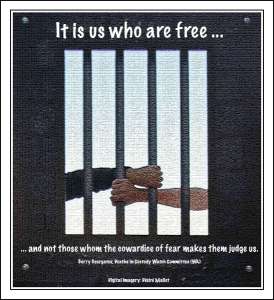 The more west we journey across the nation the higher the arrest rates, the higher the jailing rates. In the last two decades Australia’s prison population has doubled. The national prison population is nearly 40,000. More than 85 per cent of inmates have not completed a Year 12 education, more than 60 per cent have not completed Year 10, while 40 per cent did not get past Year 9. More than half were not in any paid employment when they were arrested, while half had been homeless.

If you are born Black in the Northern Territory you have a three in four chance of living poor your whole life. One in 8 of the nation’s Aboriginal and/or Torres Strait Islanders have been to jail. One in 6 has been to jail in Western Australia and for the Northern Territory. Poverty, homelessness, racism sets up people for failure, for prison, for reoffending. The situational trauma of incarceration is compounded by its ongoing punitive bent – and the majority of people come out of prison in worse condition than when they went in.

Art programs alone and some recreation will not transform the lives of the majority in the significant ways that matter. The prison experience is one of dank concrete cells, of isolation, of a constancy of trauma and anxieties, of entrenching depression and for many a degeneration to aggressive complex traumas. Australian prisons are not settings for healing, trauma recovery, restorative therapies, wellbeing, educational opportunities and positive future building. But they should be and can be.

Lives can be changed, hope can flourish and outcomes achieved but the helping hand is needed – pre-release and post-release. As a society we should be doing everything possible to keep people out of prison – and not everything we can to jail people, but where incarceration is the outcome, then everything must be done to help the people within them.

“They look at us like we are nothing or we are animals,” Former prisoner

“It is better I am here so my children can have some hope,” Prisoner

“There is nothing for us to do inside except to keep our heads down and avoid trouble,” Prisoner

We need to invest in education opportunities while people are incarcerated in Juvenile Detention and in adult prisons and from effectively as soon as someone is incarcerated. What is on the outside can also be on the inside – prisons do not have to be vile dungeons of psychological torment. They can be communities of educational institutions, places of learning, social support structures.

There are 10, 11 and 12 year olds in Juvenile Detention facilities – child prisons – and the situational trauma of incarceration should not be allowed to degenerate these children into serious psychological hits. These are critically at-risk children who need support and not the rod. The majority of the children will respond to the helping hand, as long as they are validated and not denigrated.

With Aboriginal and/or Torres Strait Islander children, nearly 80 per cent will be jailed again after release from their first stint in Juvenile Detention. The punitive with all its associated denigrations is not working. The psychosocial self has been humiliated, debilitated, stressed by traumas. It is positive that there is an increased onus on post-prison mentoring, healing and education and work programs. There should be much more of this but we should not be waiting for this as post-prison options only and that all this should be in place from the commencement of incarceration. This would assist in reducing depression, anxieties and the building up of a sense of hopelessness. I am advocating for all so-called correctional facilities to be significantly transformed into communities of learning and opportunity. This is what any reasonably-minded society would support.

“The degree of civilization in a society can be judged by entering its prisons,” Fyodor Dostoyevsky

“As soon as we are locked up there should be plans for us to better us,” Former prisoner

“Too many of us come out with less hope than ever before,” Former prisoner