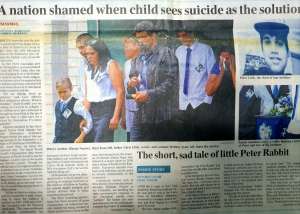 Gerry Georgatos – In 2014, I disaggregated to the Kimberley’s First Nations peoples, the nation’s highest suicide rate, one of the world’s highest, at over 70 suicides per 100,000 population (First Nations), thereabouts seven times the national rate. Fortunately, although there is a devastatingly long way to go, the suicide rate has been reduced to less than 50 per 100,000.

For reference as to the 2014 disaggregation: https://www.theaustralian.com.au/nation/a-nation-shamed-when-child-sees-suicide-as-the-solution/news-story/bfdb4008518508cb79d0504a33a22d3d

But the nation’s most affected are now the Murchison-Gascoyne’s Yamatji peoples. Last year they recorded the nation’s highest suicide rate; nearly 90 suicides per 100,000 population (Yamatji); more than seven times the national rate.

Thereafter, north and far north Queensland First Nations peoples presently comprise the highest suicide rates, at 60 per 100,000 population (First Nations). With the devastating grim reality that Townsville alone last year comprised nearly 10 percent of the nation’s First Nations suicides. There are services in Townsville that if funded to do so can ensure proximal supports to the most vulnerable.

24/7 outreach is the missing link in suicide prevention.

Megan Krakouer, Director of the National Suicide Prevention & Trauma Recovery Project, stated to the National Indigenous Times, “Our service, sees suicidality at an average 250 individuals weekly. We outreach, and therefore reach the most at-risk. Suicide prevention without assertive 24/7 outreach is not suicide prevention.“

The Geraldton Regional Aboriginal Medical Services – GRAMS – as argues its CEO, Deborah Woods to Hannah Cross, Editor of The National Indigenous Times “is devastatingly disappointed that not even one percent of State health funding for the region has not been dedicated to the region’s Yamatji First Nations peoples.”

GRAMS CEO, Deb Woods stated to The NIT, “The Murchison-Gascoyne has a higher mortality rate than the State average, and the mortality rate disproportionately impacts, devastates, the region’s Yamatji people.”

“We need the psychologists and mental health specialists to be there for our most vulnerable, and to be able to plan outreach, a vital missing link, and the flow on effect will be improved access to primary and secondary healthcare.”

The GRAMS has called on the Deputy Premier, Roger Cook, who is also the Minister for both Health and Mental Health, to fund appropriately the GRAMS and “end the health discrimination and inequalities.”

I disaggregated standalone for 2019, that the Murchison-Gascoyne’s Yamatji people are tragically the nation’s highest suicide rate – almost two times the suicide rate of the Kimberley’s First Nations peoples

Gut-wrenchingly, more than one-third of Western Australia’s First Nations suicides last year and the harrowed trend continuing, were of Yamatji individuals, with the youngest aged 12.

Overall, there were 383 West Australians who died by suicide last year and of whom at least 27 were First Nations West Australians. To reduce the suicide toll for West Australia, for Australia, outreach must be the forefront of investments, and more needs to be spent than ever before to save lives.”

The disaggregation to the Yamatji people deliberates a suicide rate of 87.5 per 100,000, the highest in the nation for 2019.

Deborah Woods stated to The NIT, “The McGowan Government has approved $73 million to redevelop Geraldton Health Campus, $5.93 million for Geraldton allied health services and $12.8 million for a range of allied health services across the Midwest but the GRAMS which represents 12 percent of the region’s total population has not been offered a single dollar. Do our people matter?”

In the meantime, the GRAMS is working closely with the National Suicide Prevention & Trauma Recovery Project in a bid to improve planned and needs based outreach.

National Suicide Prevention & Trauma Recovery Project Director, Megan Krakouer was quoted by The NIT, “We recently partnered up with the GRAMS for a week and outreached to 30 vulnerable families in Geraldton. We worked with suicidality and have at this time three Yamatji young men in Perth, in positive mindsets, pathway-ed to a training to employment program and they will score by end this week Certificate IIIs in Construction, all their tickets, and are guaranteed fulltime employment thereafter. That’s what planned outreach achieves, it’s what quality mental health practitioners can achieve. We need to turnover more case engagements.”

Deborah Woods, “It breaks my heart that Yamatji people this year are recording the nation’s highest suicide rate, one of the highest in the world, but we must resolve, with the support of the State Government, that this high rate of suicide does not continue as it did for so long for instance with the Kimberley peoples.

Avoidable mortality is tragically at 58% of Murchison-Gascoyne resident deaths under the age of 75 years. These deaths could have been avoided through the better use of primary prevention and treatment interventions. The avoidable mortality rate for Yamatji people is 5 times higher than for the rest of the Midwest’s population. GRAMS should be proportionally funded five times the rest of the demography and then that’d be health equality. The principle of proportionality is vital.

Australian Governments need to courage up, get visionary, put people first, improve the lives of the most affected, validate and love, spread that love. Our Governments have to stop the crap of posturing around suicide prevention and instead invest like never before in authentic suicide prevention and oversee that authenticity so lives of children and older do not crumble away before their time.

There are no greater legacies that any Government can have than to save lives, to improve the lot of the most vulnerable.

Queensland’s and West Australia’s Governments need to do much more than the historical and contemporary very little they spend and misspend in ‘suicide prevention’, for all their vulnerable people. It is an indictment. To expect anything genuine with anything suicide prevention from the present Commonwealth Government mob is just never going to happen, tragically. They are a reprehensible disgrace, a pile of muddled minded ignorance and cumulative cruelties.