The neoliberal coup in Brazil 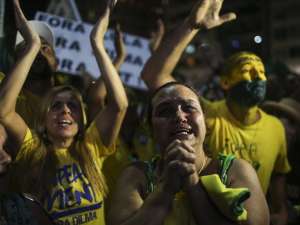 The slow motion neoliberal coup in Brazil, which masquerades as impeachment of the President for corruption, took another turn this month with the ousting of President Dilma Roussef and her replacement by Vice-President Michel Temer and the right -wing Brazilian Democratic Movement Party or PMDB (in Brazil impeachment results in the appointment of a person from a different party to that of the elected President).

Roussef was dismissed over allegations of accounting manipulation that supposedly misrepresented the fiscal position of the government. The allegations will be heard by the Brazilian Senate, which itself is awash with corruption.

In reality, her dismissal was a right-wing neoliberal coup by a right-wing party and their powerful corporate and business backers to wrench the country from the hands of a moderate left government and condemn Brazil to a path of unrepentant neoliberalism. This, despite the same right wing party losing 4 elections in the last 14 years.
In 2002, Brazil threw off the shackles of a 22 year long military dictatorship supported by the UK and US Governments, by electing the left wing Workers Party led by Lula Da Silva. ‘Lula’ was President until 2012 when he had to stand down because Brazilian Presidents cannot be in power for more than 3 terms. His replacement was Dilma Roussef who lead the Workers Party to a fourth election victory in 2014.

While the Workers Party implemented many important reforms- the minimum wage was doubled and public and social services expanded, poverty was reduced by 55 percent, extreme poverty by 65 percent and inequality reduced significantly- Brazil remains one of the most unequal countries in the world.

Although Roussef’s party was mired in corruption scandals, she was not accused of impropriety. The collapse in the oil price hit Brazil’s economy hard and forced Roussef to make severe cuts which demoralised her supporters. As her popularity plummeted Brazil’s right wing corporate and political elite saw the opportunity to strike.

Political corruption is endemic in Brazil
Brazilian politicians are notoriously corrupt. Nearly 3/5 of the Brazil’s congress (318 members) is under investigation or face charges, including many who backed her impeachment. The Speaker of the House who led the impeachment process is accused of squirreling away $5 million in Swiss bank accounts.

As Glenn Greenwald points out, Temer is a deeply corrupt and unpopular politician stained by his own corruption scandals. He is accused of involvement in an illegal ethanol purchasing scheme and was found guilty of, and fined for election spending violations for which he faces an 8 year ban on running for office.

Many members of the Brazilian Democratic Movement Party have been involved in the most serious corruption scandal in Brazil’s history. Known as Operation Car Wash, the scandal involves hundreds of millions of dollars of money laundering and bribery surrounding the state-run Petrobras oil company.

A key agenda for impeaching Rousseff was to stop investigations of corruption against Congress members and media executives.
A neoliberal coup
The real purpose behind the coup was on display within days when Temer appointed a government made up of white male members of the BMDP, even though  they had lost 4 elections since 2002, including an election 18 months ago.

Seven of the ministers he appointed are under investigation for their alleged role in the Petrobras corruption scandal.

Temer showed his intention to serve the interests of his corporate and business backers. Without a mandate, Temer immediately announced a suite of neoliberal austerity measures, including sweeping cuts to government spending, reversing constitutional commitments to education and health spending, slashing pensions, cutting thousands of public sector jobs, freezing the minimum wage, gutting labour laws and weakening workers rights and privatisation of infrastructure, institutions and services.

Temer also announced his intention to appoint Goldman Sachs and IMF officials to run the economy.

Temer’s appointments include an agriculture minister who is an agribusiness billionaire known as the “soy king”, who is said to have destroyed more rain forest than any living person. The Minister of Justice is an open advocate of police repression. In his previous role as Secretary of Public Security in São Paulo, he ordered the military police to invade a high school that had been occupied by students protesting against theft of funds allocated for school lunches. The Finance Minister is a former CEO of Bank of Boston and an advocate of extreme neoliberal economic policies.
US involvement in the coup
Once again, as in many other recent coups in Latin America, the hands of the US Government and US corporate and business interests are all over the Brazil coup.

The US President and Secretary of State were silent on the coup.

Wikileaks has recently exposed Temer’s connections to the US Government. Wikileaks has released declassified material showing that Temer was an embassy informant for US intelligence and military, raising serious questions about US Government and corporate involvement in the coup.

The damning evidence was provided in a series of tweets by the WikiLeaks Twitter account that linked Temer to diplomatic cables highlighting the information he provided to the U.S. military and National Security Council.

The USA has long opposed Roussef’s independent-mindedness and participation in the BRICS trade grouping seeing it as a threat to US influence in the region. Edward Snowden’s revelation that the NSA had been tapping her phone, led Roussef to deliver a blistering speech at the United Nations accusing the US of violating international law and violating “the principles that must guide the relations among…friendly nations”.

Leftist governments in Brazil and Venezuela have long been targets of US destabilization efforts. Mark Weisbrot writes that the US has always supported coups against left wing governments in Latin America:


“…including — in just the 21st century — Paraguay in 2012, Haiti in 2011 and 2004, Honduras in 2009, and Venezuela in 2002. President Obama went to Argentina to lavish praise on the new right-wing, pro-U.S. government there, and the administration reversed its prior policy of blocking multilateral loans to Argentina. It could be a coincidence that the scandal at Petrobras followed a major NSA spying operation that targeted the company — or not. And within Brazil today, the opposition is dominated by politicians who favor Washington.”

Democracy Now reported that in the lead up to the coup key Opposition leaders from the PMDP right wing party traveled to Washington to meet with and brief senior US officials.

There is also evidence that some of those involved in the coup have links to the US billionaires and influential political funders, the Koch Bros. The Free Brazil Movement, a far right group committed to neoliberal market solutions, is linked to groups financed by the Koch Bros.

Some groups actively involved in the coup also have direct links to corporations, big business and corporate elite in Brazil. The Chair of the group Students for Liberty has business interests connected to companies previous involved in the 1964 military coup and the organisation VemPra Rua (Come to the Streets) is funded by a foundation owned by Brazil’s richest businessman.


As Glenn Greenwald writes, the Brazilian corporate media is a key player in what he calls a ‘neoliberal coup’, by drumming up and legitimizing corruption allegations and supporting impeachment, supposedly in the name of democracy and freedom and to protect against corruption. This is despite the new right-wing government being more corrupt that the one it replaced.

“In a barely veiled manner, the leading national media have urged the public to help bring down President Dilma Rousseff. The journalists working for these media groups are clearly subject to the influence of private and partisan interests, and these permanent conflicts of interests are clearly very detrimental to the quality of their reporting.”

“A key player is Globo TV, which is known for supporting the military dictatorship that lasted more than 20 years in Brazil. Globo executives were recently mentioned in connection with the Panama Papers, and in the investigations against FIFA for illegal procedures in negotiating broadcast rights of soccer games. At the same time, large demonstrations against the impeachment and in defense of the democratic process that elected president Rousseff have been ignored by mainstream media.”


Response to the coup
Street protests against the coup erupted across Brazil immediately and a group of over 800 international academics and intellectuals calling itself “Humanity Against the Coup in Brazil” released a statement condemning the coup.

The new  government threatened  to criminalise and arrest protesters and demonstrators.
Leaders of other Latin America countries condemned the coup.

In this piece Lawrence Reichard writes on the response of some everyday Brazilians in the neighborhood where he lives in Rio.

Here in Australia there has been virtually no serious reporting of the Brazil, coup. The only reporting Australians get about Brazil focuses on Australia’s preparation for the Rio Olympics.

There are growing calls for a boycott of the Rio Olympic Games in protest against the coup.