More “angry” summers for Australia according to anthropogenic study 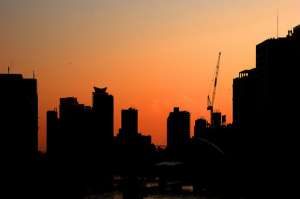 Australia has recorded its hottest summer ever recorded.

A University of Melbourne research team has suggested that hotter summers loom and will become more frequent and severe. Without radical economic reforms, worldwide, it is not likely that global warming as it has been portrayed can be reversed. It will have to be accommodated but at great human cost and tragedy.

According to the University of Melbourne research study the chances of increasingly hotter summers year after year have increased by five-fold. Co-author of the study’s report, Professor David Karoly said that in fact there is the likelihood of Perth, Adelaide and Melbourne experiencing 50 degrees in the not too distant future, before the end of the century.

The research report worked off a 90 per cent confidence ratio that human activity has dramatically affected global warming and that therefore it was responsible for 2013’s record hot summer.

“The extreme summer is not only remarkable for its record-breaking nature but also because it occurred at a time of weak La Nina to neutral conditions, which generally produces cooler summers,” said Professor Karoly.

Regions of Western Australia, of the Northern Territory and Queensland recorded their highest temperatures.

The 2013 Australian summer was the hottest on record. Extreme summers as part of a natural cycle according to Dr Lewis occur thereabouts every decade and a half but with human economic activity at the levels it remains, and should it in fact increase these summers will arise increasingly more frequently.

The research study’s abstract was, “Anthropogenic contributions to the record hot 2013 Australian summer are investigated using a suite of climate model experiments. This was the hottest Australian summer in the observational record. Australian area-average summer temperatures for simulations with natural forcings only were compared to simulations with anthropogenic and natural forcings for the period 1976-2005 and the RCP8.5 high emission simulation (2006-2020) from nine CMIP5 models. Using fraction of attributable risk to compare the likelihood of extreme Australian summer temperatures between the experiments, it was very likely (>90 per cent confidence) there was at least a 2.5 times increase in the odds of extreme heat due to human influences using simulations to 2005, and a five-fold increase in this risk using simulation for 2006-2020. The human contribution to the increased odds of Australian summer extremes like 2013 was substantial, while natural climate variations alone, including El Niño Southern Oscillation, are unlikely to explain to the record temperature.