How Would American Indians Teach US History? 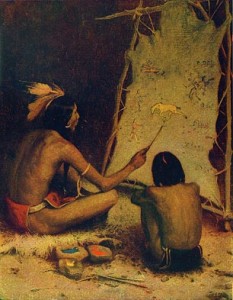 The following are excerpts from Teaching Truly: A Curriculum to Indigenize Mainstream Education
By Four Arrows
(May, 2013 Peter Lang Publishers)

Many say that public schooling is failing. The evidence offered depends upon the critic’s viewpoint. Policymakers, politicians and the private education industry point to the inability of schools to meet federal mandates. Left-leaning reformers complain it is the take over of schools by corporations that defines school failure. Employers complain about job skills. Parents cry about dropout rates. Teachers refer to crumbling infrastructure and diminished finances. Students say the curricula is boring and irrelevant. On it goes. Schools are failing, but the evidence to substantiate the assertion is that life systems on Earth are at a tipping point. Schools are failing because the standards and curricula stifle even the best teachers, allowing for the harmful influences of corporatism and hegemony to continue the insanity dominating our world today. But growing numbers of teachers are ready to take control of what and how they teach in the classroom. They want practical guidelines for doing this in ways that have not been available until this book with its course specific guidelines offering both sufficient proof about educational hegemony and with clear guidelines for offering alternative and complementary lessons that can offset hegemonic influences.

It was not long ago when the U.S. government used education to harm our Indigenous neighbors to prevent the spiritual knowledge and values of Indigenous Peoples from threatening more materialistic goals. How federal education policies and common core standards today use education is not all that different, except now the same suppression of vital knowledge and values is hurting us all in ways soon revealed if not already known to the readers. As mainstream classroom teachers come to realize that standard curriculum and pedagogy have long been intended to suppress, not foster democratic ideals, they will embrace the solutions offered in this book without waiting for more school reform efforts to fail. Teaching Truly offers teachers the kind of authentic, truth-based teaching ideas most hoped they would be able to use when they first became teachers. “Partnering” mainstream curricula with Indigenous perspectives allows for such teaching. It can guide learning toward building rich, joyful relationships between diverse humans and between humans and non-human. It allows for a collaboration that can effectively counter the pitfalls of mainstream policies, politics and curriculum in ways that a more confrontational critical pedagogy alone has been unable to do.

Bruce Lipton and Steve Bhaerman write, “True sanity must face and embrace the insanity of today’s world and, in the process, offer to the temporarily insane anew awareness and a pathway to achieve harmony . . . sanity is about integrating opposites rather than taking refuge in one polarity or the other” (2009, p. 195).

There is no question that the Indigenous perspectives offered here stand in stark contrast with the Western ones most readers have embraced. Yet this “partnership” between cultural assumptions about living and learning is essential in this era of crises. We are now forced to ask ourselves, “What must we do in this crucial moment as educators? Getting this book’s message and practical lesson plans into classrooms is one answer. Using this handbook will significantly help education do better that which best serves joy, balance, health and justice for all.

Note
1. In his book Theory and Resistance in Education, Henry Giroux (2001) argues that resistance is essential for authentic school reform and that studying minority values and comparing them to dominant ones is the best form of resistance. He says that this reexamination of schools must begin with a study of hegemony in the curriculum. Critical pedagogy over the years has concerned itself largely with a hegemony that is mostly oppressive of subordinate groups. Today it is the “99 percent” of the population who are beginning to realize that the goals of hegemony serve a more concentrated elite.

Adapt and use this chapter’s information according to your students’ ages and cognitive levels. Use it as an introduction to your standard course content or weave values,
ideas or critical reflections into it throughout the course. Encourage students to
carefully reflect on this information with the goal of deciding what mainstream ideas
are best replaced with Indigenous ones, which ones are best as they are, and how the
two might be partnered in terms of practical benefits for the students and their community (local and global). Use the questions at the end of the chapter to help with this process and to stimulate primary source research and enthusiastic, critical dialogue.

Since, in Indigenous ways of thinking, the ideas related to this subject have relevance to all the other subjects, you may want to incorporate some of this chapter’s material into the study of another subject area. As with all chapters in this section, this chapter is organized as follows:

Western scholars develop history based on war-to-war timelines, interspersed with intensive, great-man profiles. Nothing could be further from Indigenous notions of how to tell history. In the first place, Indigenous cultures assume that peace is the natural state of humanity, so war cannot be the focus. Second, particular stories belong to particular places and may be told only at particular times. Third, history consists of a set of cycles, in each of which the people learned something really important to community cohesion and survival. Fourth, Indigenous Peoples are communal and democratic, so what matters is the central event of any given cycle and how all the people fared under it, not how some elite individual distinguished himself or herself by wielding power over others. Finally, qualified Elders are listened to as they relay the many versions of each story that exists.

Each culture has its own geographical place, to which its stories are tied. The rivers that run through it, the weather, the plants, the animals, the people – everything is seen in terms of its spiritual connections to its locale. Thus, for instance, the Lenapes are called “the Grandfather Nation” because they were the first to arrive in Dawnland (the mid-Atlantic coast).

Indigenous cultures have, moreover, particular times of the year, which coincide with when particular stories are to be told. Thus the Laguna-Keres-Acoma story Kochinnenako, or Yellow Woman (Corn), is told at the change of seasons from winter to summer, which also signals the shift of civic responsibility from one half of a clan to the other. In the eastern woodlands, storytelling is not even allowed during the summer, when all the crops are being planted and tended. Everyone loves a good story, so if the Elders told stories in the farming season, everyone would stop work to listen, and nothing would get done. This is why “going ga-ga,” or telling stories, is put off until harvest time.

It is interesting that settler culture in the U.S. copied the “summer is for work” notion of the woodlanders in setting up its school system. Any Indigenous teaching of history would certainly continue to respect the times of the year during which any story can be told, as well as the geographical place concepts vital to the stories.

Because the purpose of telling history is to ensure that the central lessons of the cycle at hand are understood and honored, Indigenous history would work from a consensus on what any particular story meant to the people. In this way, the Plains Peoples create what they call their “Winter Counts,” officially recording the event that all agree most impacted the entire group over the previous year. Many Indigenous groups have also formal cycles covering hundreds, or even thousands, of years and comprising multiple events. Thus do the Hopi People keep “Worlds” (epochs), saying that we are today living in the Fourth World. Instead of pushing the memorization specific dates, then, Indigenous history would be clear about the cycle to which any particular story belonged and where in that cycle it fell. For instance, in the epochs of the Iroquoian tradition, the creation of the clan system occurred in the First, or Creation, Epoch, whereas invasion by the Europeans occurred in the Second, or Great Law, Epoch. As is obvious from the names, the Creation of Turtle Island, and the land life on it, was the main event of the First Epoch, whereas overthrowing oppression to create the Iroquois Constitution was the main event of the Second Epoch. Proper storytellers know the impact of all events recounted in all cycles on the people living today and make them clear. The community, not any individual, is the focus.

Cultural heroes about whom the people have many stories, such as Nanapush of the Anishinabe or Skunny Wundy of the Senecas, would be recognized as present primarily for their comic value, although small morals are also part of the stories. Some great actors, such as White Buffalo Calf Woman of the Lakotas or the United States prophet Wovoka of the Paiutes, would be mentioned, with both spiritual actors (White Buffalo Calf Woman) and human actors (Wovoka) included as real. It would, however, be the deeds of these actors, not the individuals themselves, that mattered. The impact of the deeds on the whole community, both at the time and in the present, would be emphasized over the biography of any one individual because communal peoples just do not see this or that specific individual as all important.

Biography is not an Indigenous genre.

Not everyone is viewed as qualified to tell the stories of their people, nor is only one version of an event viewed as “the one, right story.” Instead, there are various recognized “Keepers” (historians) who belong to the particular lineages through which the stories have come. This is why there is always more than one version of even the most sacred traditions. Even though some versions may be generally considered better than others, all versions of a traditional story are considered simultaneously true.

This is because communal peoples work toward harmonious relations, not continual confrontation and sour spats. Everyone’s point of view is respected. Consequently, Indigenous history would present all versions of every story, from all points of view, instead of imposing the view of just the most powerful or elite group on everyone.

Belonging to Elder-based cultures, Indigenous groups revere their oldest members. Youngsters do not demand stories (or anything else) from Elders. Instead, the Elders choose when and on whom to bestow a story, making the gift of history highly valuable to the recipient. Elders must be approached with great respect and humility and be asked gently to recite some of what they have “seen and heard in their travels” through life. Youngsters do not despise hearing the stories, wriggling resentfully under the telling or surreptitiously playing with their iPhones, but listen intently to comprehend what is being said. They thank their teachers when the story is done. The final exam for history, Indian-style, would evaluate the competence with which any youngster was able to repeat all versions of a story, complete with the names of the lineages through which each story came.

Thus, instead of being seen as boring, irrelevant and soon forgotten, history would be seen as a vital link to the ancestors, those that paved the way for good things and those whose mistakes offer lessons for the present. History can remind us about the spirits that continue to influence and oversee our stories. History is the opportunity for truth-seeking stories and when these stop, the people cease to exist as well.