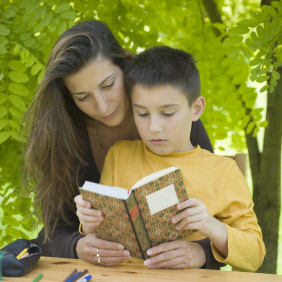 According to the latest Board of Studies Annual Report, in New South Wales, Australia, there are currently 3,327 students registered for home schooling. But it seems many home educators are dissatisfied with the state’s home education system.

A group of mothers meet at the local park, armed with picnic rugs and shareable snacks. Their children, who vary in age, have joined. The younger ones bring sports balls and take advantage of the netball hoops and swings around them. The older ones sit on the grass, crocheting or chatting with the grown-ups. It’s an afternoon gathering that happens every Thursday for the local home school kids and their educators.

But not every aspect of this unique NSW education system is as pleasant.

“Home educated kids are invisible in government funding models,” says Karleen Gribble who is a home education parent affiliated with the Home Education Association (HEA), “And decisions are made without considering the impact that they will have on home educated kids. That doesn’t happen with regular school kids – their interests and needs are always considered when governments make decisions about education.”

NSW has recently introduced funding strategies to improve the results of rural and remote school students, has invested in a fairer early childhood education system, has implemented a new model which funds schools in need, and has financially supported school students who are at risk of not reaching the minimum standards in literacy and numeracy.

Egalitarianism is a foundational basis of Australian society, yet there is a significant lack of equity between home school kids and regular school kids in NSW. Home school kids in NSW cannot access free swimming lessons or laptops that are provided for regular school children. They cannot participate in educational programs whilst in extended hospital stays, access Open High School distance education language programs, or participate in TAFE like other high school children do.

The Smart and Skilled funding model for TAFE was introduced at the beginning of this year. It excludes home educated kids from accessing funded places at TAFE. Kids who are at school can do school-based apprenticeships, traineeships and TVET courses, but home educated kids can’t access them because they’re not at school. Without funding, a Certificate 4 TAFE course that runs for six months will cost $10,000 that has to be paid up-front.

“TAFE is a really important pathway for home educated kids to gain further education and get into university,” Gribble says. “This is a decision where it clearly didn’t filter through that it was going to affect more than just kids at school and that home educated kids needed to be considered.”

Gribble has a seventeen-year-old home educated daughter who is already enrolled in TAFE. Her name is Ling, she was accepted into the Swimming NSW Multi Class Squad last year, is an expert in mango-pancake-making, and is now nervously awaiting a hefty TAFE bill as her parents write countless complaints to MP’s.

And money is a significant issue for home educators in more ways than one. Home school mother Kathryn Peterson has a musical family. She says, “If my children want to do a lot of extra curricula activities it costs me a fortune, because it’s not like they can just go and join the school choir,” and this fact is what drove her to start her own weekly choir for home schooled children on the NSW Central Coast.

In New Zealand, home educators receive government funding in recognition of the costs that they bear in educating their children. The annual amounts paid are $743 for the first child, $632 for the second child, $521 for the third child and $372 for subsequent children.

Concerning this, single home school mother Stephanie Hayes submitted a letter to the 2014 NSW inquiry into home schooling. In her letter, Hayes stated that receiving a small financial subsidy in NSW would be a great help for her. “Even private schools are partly subsided to educate children,” she wrote, “And we as home educators bear the cost burden alone.”

She mentioned the constant discussion about the importance of high quality education for children in Australia and suggested that a payment would enable her to provide more resources for her twelve-year-old son’s education experiences. Gribble agrees that home schooling can be quite an expensive option.

Home education is more popular than ever, yet registrations are dropping. The HEA estimates that there are as many as 17,000 illegally unregistered home schoolers in NSW. Paul Green, member of the Christian Democrats Party, says that, “It’s mind boggling that, in this day and age, we don’t know how many children are being home schooled…which says more about the process being a discouragement rather than an encouragement.”

Home school mother Vivienne Fox is an HEA Committee member. She says, “I think that if there was something that actually benefited home-school parents, such as financial assistance, it would encourage more people to actually register.”

In terms of seeking options for financial assistance, The Board of Studies, Teaching and Educational Standards (BOSTES) tells home educators that it will embark on its best endeavours to provide the sources of such information without being responsible for dealing with any inquiries.

But, money problems aside, home educators believe that there is a much more significant flaw evident within this education system: the registration process.

In New Zealand, it is not compulsory for home educators to use the New Zealand Curriculum as a guide as they demonstrate that their children will be taught as regularly and as well as in a registered school. But in NSW, parents must provide extensive and specific paperwork for the BOSTES before they can home educate their children.

Fox is convinced that this method is simply focused on “box ticking”. She recalls the story of a mother who decided to home educate her son because, at the age of twelve, he struggled with reading. Before her first registration, her son could not read. Before her second registration, two months later, he had made significant progress.

“But they rejected her because she hadn’t recorded the NSW syllabus outcomes in her new curriculum. But what that child actually needed at that point was to learn how to read, so reporting on the outcomes was actually not helpful!”

“Someone from the home-schooling community helped her to better record the outcomes in detail, so she re-applied for registration and got it. But the education that her child was receiving was still the same – it’s just that the paperwork had been fixed up. This shows how inappropriate the system is. That particular child needed to learn how to read, so he and his mother should have been supported in that endeavour and given the opportunity to achieve it.”

In Tasmania, home educators are given a six month probationary period as soon as they make the choice to home educate. This allows for families to find their feet without the added immediate pressures of inspection and registration while they do so. This is especially helpful if schooling has been a traumatic experience and their child needs a period of respite and recovery.

But home educators in NSW must first and foremost adhere to the relevant syllabus. The BOSTES states that this curriculum, developed in collaboration with teachers and other key education stakeholders, provides clear direction to essential and required learning for all NSW students.

However Mark McCrossin, Liaison Officer Metropolitan for the BOSTES, says that this requirement may be determined by each home schooling parent. “There are many ways that a parent can demonstrate that their child’s education program is based on the relevant syllabuses. They have the flexibility to make adjustments and choose syllabus content according to their child’s individual leaning needs and interests.”

Gribble believes that the current registration process doesn’t actually examine how well a student is doing at home education. “Someone will come to your home and check the lighting, ventilation and space. They’ve got this idea in their head that kids do all their learning in one particular space, just like a school classroom.”

But home-school mother Karen Willson says that learning is actually done “in the kitchen, on the trampoline, behind the couch and occasionally at the table or desk – from the time that the kids wake up, until the time that they fall asleep”, and this is something that the government does not understand.

The person who assesses and approves applications for registration of home schooling is called an Authorised Person (AP). The BOSTES says that its APs are highly qualified and experienced educators who have held senior roles in registered schools and this experience enables them to do their job.

Most home school parents understand the importance of monitoring and recognise that many APs want to be helpful as they interact with home educators, even if they fail to do so.

In the Tasmanian home education model, the Department of Education employ registration staff who have direct home education experience and can therefore relate to the parents they will monitor.

Gribble also has suggestions for the more insensitive: “The AP needs more appropriate training. Sometimes, they don’t even know that they’re doing something that is stressful for home school kids. Lots of kids are home educated because they’ve had traumatic experiences at school. Yet many APs tell these kids that if they don’t do more work, they’ll have to go back to school. I sat in on a registration visit for a teenager who had a knife pulled out on him at school. For him, the thought of going back to school was absolutely terrifying. I know of a teenage girl who lost sleep and got panic attacks after being told that she might have to go back to school.”

The BOSTES states that APs undertake training which focuses on equipping them with the skills and knowledge necessary for their role and equips them to regulate in a sensitive and responsive manner.

Members of the BOSTES include teachers, principals, nominees of the Catholic Education Commission and the Association of Independent Schools, an expert in early childhood education, and an Aboriginal person. There is no one representing home educators.

Fox also has “no doubt that there is no other Australian state in which home educators are so poorly treated as in NSW, asked to provide such extensive paperwork, or provided with so little support”. She believes that a large amount of home educators aren’t legally registered because the process is so hard and unpleasant, or because they fear being forced to stop home schooling.

Yet she, along with so many other parents, continues to home educate her children. These parents have the opportunity to simply put their kids on a school bus in the morning and pick them up in the afternoon, leaving the state of their education solely in the hands of a trained teacher and kissing the hardships of home school goodbye. But they don’t.

According to research conducted by Anne Chapman and Thomas O’Donoghue, there are many different reasons for this. Some common ones include the belief that parents are primarily responsible for the education and wellbeing of their children, the desire for closer family relationships, an avoidance of peer pressure and school bullying, allowing their children to learn at their own pace and experience more one-on-one interaction, not wanting their children to only socialise with peers of the same age, wanting to avoid the homogenisation of children… the list goes on.

And home school parents of NSW can easily persevere once they remember that in a number of countries across Asia, Latin America and Europe, home schooling isn’t even legal.