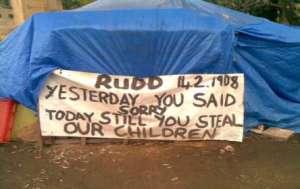 The Prime Ministerial Apology to the Stolen Generations was delivered on February 13, 2008 but this photo was taken in October 2008 at Old Tent Embassy – Photo by Gerry Georgatos

Former Government worker for the NSW Department of Families and Communities, Debra Swan on National Sorry Day joined one of the 15 protests happening across the continent to not only remember the Stolen Generations but to point out that they are continuing. In NSW, one in 9 Aboriginal children is ripped from their families into “out of home care”.

Ms Swan said, “I have seen the injustice, and how unfair this system is, with my own eyes.”

According to Ms Swan, “Too often, removals happen without any consultation. Parents come into the office frustrated and angry, as anyone would be after having their children ripped away from them.”

“They are then written off even further, branded ‘non-compliant’ or ‘aggressive’.”

“The Children’s Court system is stacked against Aboriginal people. I have seen too many solicitors who have no idea what they are doing, or just push our people to go along with the demands of the Department.”

“Parents are told that unless they agree to orders, they will be denied any access to their children.”

“Justice Woods did his Royal Commission into Child Protection and he said that Aboriginal are removed from their families for much less than what are non-Aboriginal children.”

“I have seen the biases, the discrimination, the prejudices, the drive to assimilate Aboriginal people. Towards the end of my time there, my eyes opened up to them and especially after I left I realised how they assimilate us, the Aboriginal workers.”

“The Department may say it has cultural education of its staff but that is not true. What they really have is an ulterior white picket fence vision for everyone. They disregard the fact that Aboriginal cultures are not about white picket fences. They disregard our definitions of family. We are not into nuclear families with mum and dad alone at the top. In Aboriginal families there is the whole village, there are the mum and dad but also the aunties and uncles, the grannies and granddads.”

A Department of Child Protection worker in Perth, who is Aboriginal confided, “They do not even consult us as Aboriginal workers about Aboriginal families. They dismiss us, if we speak up we are shuffled out.”

“The Department is about their line, and their line is a about the White workers making all the calls. We, as Black workers are only in there to make up the numbers on the book, to cover their backs that there is equality, but there is not. Child Protection is racist, because it is all assimilation and doing as they say; you speak up as a worker and you’re out of line.”

“We have no choice but to tell our people to bow down, to keep quiet, to not piss off the White workers or they’ll be tarnished as ‘aggressive’.  That they will lose all hope of being with their children. And the Childrens Court doesn’t listen to families, only to the White workers and the DCP legal team who treat kids and families like they’re a dime a dozen.”

Indigenous Social Justice Association President, Ray Jackson was himself a removed child during the Second World War. “My White father was killed on the Kokoda Trail and instead of my Aboriginal mother being supported with a war pension, her reward was to have me taken away from her.”

“The pain of being removed never leaves you, not for the child or the parent.”

Mr Jackson, like Ms Swan, argues that there are two different cultural systems on this continent that can coexist but that the Western-based cultural majority does not let this happen and instead pushes its assimilation.

“They push on us the white picket fence, well our culture does not care about a white picket fence. Child Protection workers do not look at whether there’s love in the family or respect for one another, or how to help a family that needs a helping hand.”

“Child Protection workers come into homes and judge hygiene by how polished a home is, well it’s not our way to be slaves to how shiny a home should be.”

“They look at whether the children are wearing shoes, and if they’re not then they jot on their report sheets that they are not taken care of; well we may like to be barefoot as often as we can. But if they’ve got a problem with shoes, and we don’t have shoes, well don’t take away the children, just bloody well give them a pair of shoes,” said Mr Jackson.

University of Sydney Technology Jumbunna House senior researcher, Paddy Gibson, now living in the Northern Territory, is angry that more Aboriginal children have been removed from their families today than at any time in Australia’s history.

The Northern Territory Children Commissioner’s annual report showed that in the year to June 30, 2013, more than five times more Aboriginal children than non-Aboriginal children were removed from their families. Mr Gibson said that the predominant reason given for this was ‘neglect’, not physical or sexual abuse. But as a researcher myself, I have long argued that the ‘neglect’ has to be articulated. What do they mean by ‘neglect’?

Mr Gibson said that “too often we are seeing Aboriginal cultural practices themselves being classified as neglect.” In other words their Aboriginality is being held against them, their historical and cultural identities are liabilities.

Mr Gibson said that it costs up to $300 per night to keep a single child in care but that this is misspending when funds could have been diverted to families to relieve impoverishment.

Northern Territorian Elder Barbara Shaw said, “There are strong Aboriginal people in all communities who badly need resources and support to help deal with the issues facing our families and to keep our kids safe in their culture.”

“We are all part of extended kinship networks. There is always somewhere they can turn without removing children, but resources and support need to be on the table.”

In the Northern Territory, 70 per cent of the children removed from their families are placed with non-Aboriginal families, usually hundreds of kilometres away, making it near impossible for reunification. And there are those who have said that many of these children are being taken by families who they themselves do it for the quid on offer, and for the effective indenture of the children as domestics. These claims need to be investigated.

“People need to come forward and tell their stories, so Australia at large can feel the effect of what is happening to the families that are being destroyed, the families that are disempowered. I urge everyone to come forward despite that they may feel they will be threatened further by the Department,” said Gunnedah Grandmother, Auntie Hazel Collins.

Some believe that a class action by thousands of families will be the only way forward, to shift our not so bright parliamentarians into action, to put in place legislation that restricts the Child Protection agencies from ripping children from their families other than for reasons of obvious physical violence and life-threatening neglect, not because of hearsay, or because parents were angry when confronted by Child Protection – not because of non-compliance, and not because they do not wear shoes. Poverty must never be used to condemn families as criminals nor should the rejection of a Western-based culture be judged as a crime.

One protester said, “My grandmother and her sisters were taken in the 1930s, her daughter, my mother was taken, then they took me from my mum, now they have taken my children. I never did anything wrong. I love my children. They screamed when they took them.”