When the chair of the Indigenous Advisory Council, Warren Mundine went national with his now famous call for Treaty between First Nation peoples and the Australian Government it took four days for the news to reach Yirrkala and Nhulunbuy. Four days passed before Yalmay Yunupingu learned of the call for Treaty. I phoned Ms Yunupingu to discuss her late husband’s vision and was surprised to find myself breaking the news to her. 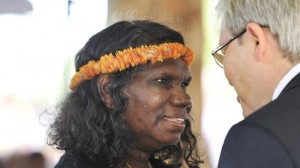 Ms Yunupingu was stunned and whisked out a “woo hoo” – she was more than just excited, but ecstatic before almost near immediately sadly reflecting on how she had wished her husband could have lived a little while longer to hear the news, to realise that his “unfinished business” might be concluded.

“His vision remains alive, his voice is with us,” said Ms Yunupingu.

“He would have been elated to hear such news.”

Not only did Ms Yunupingu not know of the push for Treaty, neither did her hometown of Nhulunbuy, nor nearby Yirrkala. I had been humbled by the sudden realisation that I was breaking the news of a push by effectively the incumbent Government for Treaty to the wife of the late legendary front man of Yothu Yindi. After our conversation I rang others I know in Nhulunbuy and Yirrkala and despite four days passing since Mr Mundine’s call for Treaty, no-one knew. All were elated to learn of the renewed call for Treaty.

Ms Yunupingu used an invitation to speak at Federal Parliament on January 26 to implore the need for Treaty, and to remind of her husband’s “unfinished business”. Ms Yunupingu realised the enormity of Mr Mundine’s public call for Treaty. She knew as we at The Stringer and The National Indigenous Times have known for quite some time, that the Prime Minister, Tony Abbott and the Minister for Indigenous Affairs, Nigel Scullion are receptive to a Treaty – indeed so they leave an indisputable legacy but more importantly it is an opportunity to craft into a Treaty changes to Native Title. This may be publicly disputed but our sources are in the highest offices. Those at the helm of this nation’s immediate future are dissatisfied with systemic failures in Native Title and “the industry (of carpetbaggers) around it.”

Ms Yunupingu said that a core Treaty, and then Treaties with each Aboriginal nation, are “the best opportunity to bridge the many divides in our nation.”

Ms Yunupingu opined for a legitimate march towards Treaty, one in the best interests of all First Nations People.

“I cannot believe this, means so much to all of us.”

“This call for Treaty, this is very good.”

“My husband wrote the song for Treaty because nothing happened after the Baranga Festival (promise by Prime Minister Hawke). My husband was disappointed the promise was broken, when first it was said there would be Treaty and then nothing happened,” said Ms Yunupingu.

“My husband wrote the song in response to the broken promise.”

“I care that my husband’s legacy, his vision, his life’s work is achieved with Treaty because he knew what it mean for all our people, and that it would build bridges for the nation to be one.”

“I spoke at (Federal) Parliament on January 26 and reinforced my husband’s vision, for Government , for the Northern Territory to bring on Treaty.”

“He went away with ‘unfinished business’ but it is business we can finish, we need to pull together, work to build the bridges together and be a nation.”

The late Mr Yunupingu posthumously received one of Australia’s highest honours on January 26 – the Companion of the Order of Australia. The award recognises the highest degree of service to humanity. Galarrwuy Yunupingu said that his brother “shared a message with all Australians that spoke to the very heart of our nation.”

On January 27, Mr Mundine called for Treaties with each Aboriginal nation adding that “in doing so, their Native Title claims should be recognised and concluded.”

Recently, Cape York’s Noel Pearson argued that Prime Minister Abbott is a “once in a blue moon” opportunity to push through a referendum on the recognition of First Nations Peoples in the Constitution. With that logic, the conservative Government of Prime Minister Abbott is the best placed to argue the case for Treaty and to push it to reality. A lot of highly placed persons and events have come together all at once on Treaty.

Mr Mundine said that for “real reconciliation” Treaty would be the opportunity for First Nations Peoples to “forgive.”

“I do believe the time must come when Indigenous people must forgive Australia as a nation.” Mr Mundine believes that Treaty is that vehicle.

When I informed Mr Mundine of Ms Yunupingu’s response to his call for Treaty he said that he was “humbled and honoured.”

Previous article on Yalmay Yunupingu learning on the call for Treaty here: