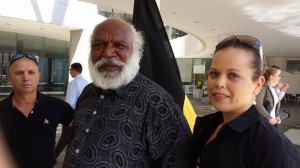 Elders have condemned a move by Toro Energy to expand their yet unrealised Wiluna mine plan into a much larger uranium precinct spanning 100km and which will destroy ecologically sensitive lake systems. Local Wiluna Elder Glen Cooke said everything must be done to prevent this mine which is intended as Western Australia’s first uranium mine – the first of many.

“The lives of not only our people today are at stake but the future of our people into time immemorial. This uranium mining if it goes ahead will spell the end of us as custodians of the land. It will make toxic the land, preventing us from caring for the land, it will poison the rivers that we swim in, drink and fish from,” said Mr Cooke.

First Peoples anti-nuclear groups have coalesced to stand in the way of uranium mining in Western Australia. But the mine is destined to be operational next year.

WA’s Environmental Protection Authority (EPA) released details of the Toro Energy expansion plan. But Wongi anti-nuclear campaigner, Kylie Fitzwater said that Toro had a long way to go in gaining new approvals in expanding from their single-mine approved project. “The company needs to complete additional environmental management, mine closure, tailings management and transport plans for assessment before any mining can commence at the Wiluna site.”

“But we need to stop this mining proposal altogether which will only risk people and communities from toxic radiation,” said Ms Fitzwater.

“It is not just about the cumulative impacts of a regional uranium precinct covering 100km and two lake systems but about the lives lost, the communities destroyed, and the door opening in WA for a rush of nuclear mad investors.”

“Toro plans to double its water consumption and store radioactive mine waste from several mine sites in a Lake bed.”

“The only safe place for uranium is in the ground, where it belongs. For 40 years my people have campaigned to protect Yeelirrie. We have walked this Country for thousands of years, it should not become Country that we fear to tred,” said Mr Muir.

On February 24, Toro Energy referred two additional deposits as an extension to the Wiluna uranium proposals – Millipede and Lake Maitland. Toro Energy proposed to store the radioactive mine waste in the bed of Lake Way. On March 25, the EPA made the Toro Wiluna uranium expansion project open for public review.

The Central Desert Native Title Service released a statement on the uranium mining proposal. “The Wiluna Martu People’s previous experience with uranium exploration in the Wiluna region has left them with serious and genuine concerns about the health effects of radiation. It also raised questions about the Government’s capacity to properly regulate uranium exploration and mining on their Traditional Lands.”

“The issue of uranium mining is not something that Martu have invited. Rather under the current policy and State regulatory environment it is something they are forced to confront in order to ensure that their Traditional Lands and their people are sufficiently recognised and protected.”

Late last year and earlier this year Mr Cooke walked into Toro Energy AGMs and expressed his concerns at the prospective impacts on Martu Country were the uranium mines to proceed. He is also concerned that signatories to the mining proposal from within his people have been “misled”.

“The signatories have been persuaded to believe the uranium operation will have low environmental impacts.”

“These people are targeted and influenced by deals to sign over the rights of the land. These people Toro talked to are now driving around in Toyotas they didn’t have before. About eleven Toyotas just appeared,” said Mr Cooke.

“We must care for our land and children and not put our future at risk. These corporations only want to make money, they are full of broken promises.”

Ms Fitzwater accompanied Mr Cooke into the Toro Energy AGM. “When Elder Glen Cooke asked a question he was treated abruptly by Toro and with complete disrespect. He was not permitted to reiterate any questions. It is clear the company tolerates no opposition and has been unfair and biased during their submission period no matter what their convictions.”

“The EPA should seriously reconsider this approval basis and commit to protecting our ecosystem. Our State cannot afford this mistake, we will pay the consequences for an incomprehensible amount of time. This concerns all Australians,” said Ms Fitzwater.

Mr Cooke said he has a complete understanding of the effects of radiation. He was eight years old when the Maralinga atomic tests took place.

Former radiation worker, Bill Macham said that Governments must amend legislation from measures of understanding radiation effects in terms of “half lives and instead to baseline measures of what are biologically safe levels”. With anti-nuclear activists relocating to Alice Springs and the Arnhem to support communities and Elders against uranium expansion, the call for the closure of Jabiluka and for Muckaty to not be used as a radiation waste dump, it appears the next generation’s tensions will highlight the proliferation of uranium mining and the rapacious rise of nuclear reactors.