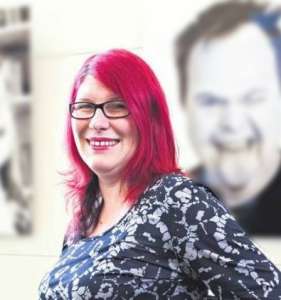 Samantha Connor’s poem of complaint has had the desired effect, yielding a refund and a response from the Perth Convention and Exhibition Centre and a promise to address the problem.

Earlier in the week I wrote this piece (and published here about Samantha’s  response to her attempt to book a ticket for a Stephen Fry gig at the Perth Exhibition and Convention Centre, only to be told that as a wheelchair user she would be charged an extra $20 because, apparently, the wheelchair bays are in premium spots.

Tired of writing complaint letters to agencies who discriminate against people with disabilities she tried something different.
She wrote them a poem.
Within days this response was sent to the editor of The Stringer, an online publication that ran my piece and also publishes Samantha’s writings on disability.
Hello,
My name is Meg Coffey and I am the marketing consultant for PCEC. In regards to your post today, I wish to advise you that PCEC have worked together with Ticketek in resolving the ticketing structure/pricing for Stephen Fry: Telling Tales, to be held in the Riverside Theatre.
PCEC have arranged reimbursements to wheelchair patrons that have been disadvantaged by the ticketing pricing structure set for the show.
Moving forward, PCEC and Ticketek will work together with concert promoters, to ensure wheelchair and carer seats are all priced within the same pricing category for shows to ensure no-one is disadvantaged by demand.
We want to ensure the experience of patrons in the venue is an enjoyable one and not marred by their experience when purchasing tickets for in-house shows.
Many thanks,
Meg

The Convention and Exhibition Centre are to be commended for taking action, however their reply is admission that they were knowingly gouging and discriminating against people living with a disability by applying an additional charge.

Many people were outraged by the Convention Centre’s gall in the first place to think they could rip people off and then try to extricate themselves. One person described the PCEC’s reply as follows:

‘In other words, we tried to rip people off, got caught and now we are exposed to be being “rip off” merchants! and because this lady is on to us!! we better lift our game’
Samantha also appeared on Perth ABC morning radio and ABC News (here) where she said:
‘I wrote the poem because sometimes something with an amusing twist is a better way to go, it keeps it light hearted. You can write letters until the cows come home and you don’t always get the response that you want.’

Samantha noted how she had been contacted by many people raising concerns about discrimination against people with disabilities by venues in Perth. She wrote:

‘It’s amazing how much discrimination goes on every day, unnoticed by most. We start talking about this issue, which was raised by another wheelchair user.

Prue tells us that she can’t go into the licensed area when she sees a show at another area because there’s a step, and the downstairs is unlicensed – a friend can’t bring her a drink downstairs. Bronwyn tells us that she has to pay eighty bucks more to attend a concert with her daughter (who is a wheelchair user) and fights for the right to sit with her kids Darren says that there is no gold season ticket at the rugby, and you can only choose between diamond (at exorbitant prices) or crappy silver. Crispin tells us that two grandstands are unavailable (no lift access) at the NIB stadium and that sports fans can’t get in to see a game. Someone else, I forget who, said that going to see the cricket was impossible because the shaded seats were inaccessible and your choices were left of field in full sun.

It’s pretty interesting that the stuff we work on at systemic and policy level is all about ‘increasing participation’ but people literally can’t get in the door, to work as well as to play or just do the things ordinary Australians do. I’m not off to Stephen Fry, for a number of reasons – one of them is that no matter what the price is, I’m still not able to go to the event unless I go alone – the wheelchair spaces are in the premium area, which have been booked out by others. My family/friends would have to sit in the bottom bit whilst I sat up the top. Yeah, nah. I really liked that the user group and the access group for the new Stadium were and are listened to and involved all the way through. I really hope it won’t be another disastrous Perth Arena in terms of access. We live in hope!’
Categories : Human Rights