Who are the teachers and educators who inspired us? 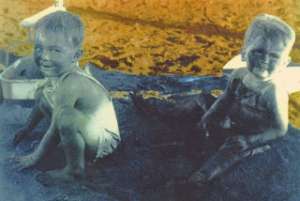 This photo from 1953 shows four-year-old Ross Munro and his neighbour Phillip Noble playing in an asbestos sandpit in a residential backyard in Wittenoom in WA’s northwest. Residents purchased the deadly tailings which were commonly used as sandpits in backyards for the purposes of children’s play and also to reduce dust around houses.

When I read Chris Hedges latest piece about inspiring teachers and educators I thought of Ross Munro.

Chris Hedges, the American journalist, writer, war correspondent and political activist and campaigner has written a moving eulogy to one of his educational mentors and inspirations- the Reverend Coleman Brown who taught Hedges at Colgate University. Hedges writes that Coleman:

had the most profound impact of all my teachers on my education. I took seven courses as an undergraduate in religion. He taught six of them. But his teaching extended far beyond the classroom. The classroom was where he lit the spark.

Hedges describes how Coleman Brown used poetry to highlight the powerful sacred forces that writers and poets struggle to express:

“Coleman would read poems and cherished prose passages out loud as I met with him in his office. It was about the musicality of language. His sonorous voice rose and dipped with intonations and emphasis. To this day I still hear his recitation in pieces of writing and poems……… Poetry, he taught me, is alive. It must be felt. It has a hypnotic power that, as Shakespeare understood, is a kind of witchcraft. And poetry, along with all other writing, is just a spent, dead force if you do not surrender to its spell.”

In thinking about the influence of his educational mentor, Hedges has written a beautiful summation of the significance and value of education:

Many of us have had or known teachers and educators who paved the way for such inspiration and passion, either in ourselves or in others.

At both secondary school and university I had teachers- sadly too few- who managed to create and light a spark like that which Hedges describes. One was  John Croft, a secondary school teacher of history who bought to life the study of history and triggered my lifelong passion for the power and relevance of historical understanding and analysis as the basis for social thinking and action.

As a young secondary school teacher I worked with an English teacher named Ross Munro, who brought alive the power of the written and spoken (and sung) word to his students. Each day outside his classroom would be a quote, extract or lyrics from a text- a book, a play, a song, a poem- which was designed to engage, to provoke, to encourage thinking.

Ross was a man much loved by his students. Even now, some of those students still speak about his influence and legacy.

Ross died young, aged just 38, a victim of the horrors and indiscriminate cruelty of asbestos and the neglect of mining corporations and government agencies. Ross was a victim of perhaps the greatest industrial and corporate crime in Australian history.

Ross was one of the ‘Wittenoom kids’ who spent their childhoods exposed to asbestos in the town of Wittenoom  in north-west of Western Australia who have gone on to develop a range of cancers and are dying at a rate well above the average population of mesothelioma.

Ross became the first non-mine worker to win a mesothelioma claim against CSR in January 1989, just before his death. His appalling treatment is documented in Ben Hills book Blue Murder.

More on Ross and events and the human cost of asbestos are  here and here.

(1) Mining of the deadly blue asbestos at Wittenoom, 1106km north of Perth, commenced in the 1940’s and ceased in 1966 and the town was later closed after airborne fibres in dust from mining operations were found to cause malignant mesothelioma, lung cancer, asbestosis and other serious diseases