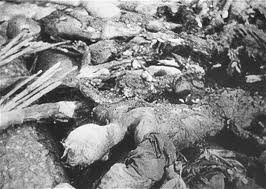 Between 28 and 31 July 1942 the Germans killed some thirty thousand Jews, among them the German Jews who were in a separate ghetto in Minsk. Image – www.holocaustresearchproject.org

If only saying sorry were simple. Sorry not only begs the question, ‘sorry for what?’ be it sorry for crimes committed, or for standing by while others perpetrated them. Saying sorry also poses the question of ‘who?’ is to blame, ‘who?’ is to say sorry, and the vexed issue of sincerity. It is not easy to say sorry. The notion of remorse is not only vexing for judges and defendants. It is also vexing for politicians, policy makers, and for the people.

First, there is sorry for crimes committed and for by-standing while others committed them. Second, Australian settlers brought venereal disease, violence and dispossession. Missionaries undermined traditional culture. “Mixed-blood” children were deliberately removed from their families. After the 1967 referendum, the federal government sat on its hands, while members of the general public comfortably assumed that, having cast their ballot in favour, their duty was done. Then, the Federal Government said sorry.

To clarify: there are two forms of collective guilt. One is the aggregate form, the sum of aggregated, personal guilt. In this form of collective guilt, the individual retains personal responsibility. In the second form of collective guilt, the collective is an ‘emergent’ feature, above and beyond the aggregate of individuals which make it up. This is the well-known, depersonalised ‘social’ of sociology and social anthropology. It is linked by these disciplines with organisational and institutional life. In it, individual responsibility is subordinate to collective guilt. Hypocritically, no individual is considered guilty. This is the form by which politicians and ordinary people seek to shield themselves from Second Nation guilt. It combines the worst of ‘I wasn’t a part,’ and ‘even if I was, it was the faceless whole rather than its parts that is to blame.’

Sorry is also about sincerity. That is far harder to address. Everyone is familiar with the scenario in which a child says sorry, or acquiesces when told by a parent, teacher, or other adult to say sorry, and sounds insincere. How many times have First Nations people heard the insincere apologies of Second Nation, supposed confreres. How might that be rectified? According to The Polish-Jewish, documentary film maker, Marian Marzynski, two forms of guilt must be distinguished: good guilt and bad guilt; sincere and insincere.

Marzynski made it his mission to assist the second and subsequent generations of Germans and Poles to find a voice, and come to grips with the Holocaust.  He was born in Poland and survived the Holocaust as a Jewish child hidden by Christians. When, around 1980, the German government announced a competition for a ‘Memorial to the Murdered Jews of Europe,’ Marzynski decided to make a documentary.  It was aired as, “A Jew amongst Germans.” He said, “I wanted to achieve what my perished relatives could not, to feel safe among the Germans.” Marzynski distinguished between optimists like his mother who promoted growth, from pessimists and haters, who fostered stasis. He felt, however, that pessimists were in the majority.

Marzynski met many of the competitors, artists and architects. One of the jurors, an art museum director from Hanover, confided that his father had been a Nazi, and that he was never able to talk to him about the war. Marzynski learned that the present, third generation of young Germans reject collective guilt. They prefer to distance themselves from the reactions of previous generations.  He said, “The offspring of the perpetrators complain that they grew up without any of the victims in their sight … Now I am here and am ready to extend my hand.”

At Berlin’s Jewish Museum, Marzynski encountered a young, Gentile educator, who informs Germans about Jewish religion and customs. Marzynski felt that the museum’s program was well intentioned, but unlikely to change attitudes.  The teacher concurred, “An anti-Semite coming here won’t be changed in a museum like this … That’s what we are told in our training, that you won’t change anybody in here. I can just offer some knowledge and let people ask questions.” Marzynski felt that only dynamic interaction, could truly bridge the distance between victim and perpetrator.

Significantly, Marzynski differentiated good guilt from bad guilt. He explained, “By saying good guilt, I am saying that each individual should figure out if he or she can afford the ‘good guilt,’ meaning an active attitude toward the past, remembering it, and not being ashamed of the word. To many people this will not be possible to which I say of course, you are not guilty. I am receiving questions about how you create ‘good guilt’ and I say it is up to the people who try, some succeed and some not. I see the Holocaust only as one representation of the evil we have experienced throughout our history as human. So my provocation called ‘good guilt’ does not apply to the Holocaust only. As such, it should be carried into the future. Unfortunately, for as long as humans are capable of killing other humans there will be need to address the question of guilt~shame~responsibility for the deeds of other people, even if we have nothing to do with it. I believe that this is a generalist concept. I’d like to promote this generosity of being responsible for the bad deeds of fellow man, I think it is an active approach to life and I think it can produce much good.”

Clearly good guilt must develop among Second Nation Australian, well before ‘saying sorry’ can be more than a catch phrase. In a speech given on Australia Day, Nyunggai Warren Mundine, Mr Abbott’s chief adviser on Indigenous Australian affairs advised his kinfolk to forgive Second Nation people, to facilitate the process of reconciliation. It is surely far too early for that. There is still much too much ongoing injustice for First Nations people. Just as important as this, Second Nation people have yet to demonstrate that their sorry for historical wrongs is, and was, sincere. How might they do that? Actions speak louder than words. At the very least, they must ensure that the figures even up for the prison population. While the proportion of First Nations peoples outnumbers that of Whites to the extent that it does, sorry still does not convince.