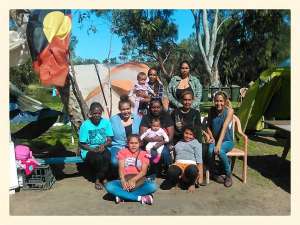 These homeless families are in a safe space – that is for as long as Matagarup camp continues. The little bub in the middle row was born homeless. Her mum went into labour at Matagarup and thank goodness it was not somewhere else in some dangerous or lonely alleyway. This is why we need Homeless Friendly Precincts. We pay our respect to the Matagarup Elders who have taken care of so many for so long

The majority of Australians do not realise the extensiveness of large homeless families on our streets. I have met families of up to 13 children – homeless, but fighting to stay together rather than be torn apart by government departments. If only our governments spent on the homeless and on public housing what they spend on the myriad of government departments and bureaucracies. In the last year I have worked with homeless families of four, five, six, seven, eight, nine children, with the majority of the children under ten years of age; toddlers and bubs.

More than one in four of our homeless, in fact 27 per cent according to the Australian Bureau of Statistics are of youth, of children – aged 18 years and less. The majority of this youth homelessness is aged 12 years and less – nearly 20,000 children aged 12 years and less are homeless. This is both a political and moral abomination for a nation that is one of the most affluent per capita and the 12th largest economy.

Nearly half of Australia’s homelessness is comprised of people aged 25 years and less. Then there is the widespread homelessness little talked about. There is the horrific homelessness that is visible right throughout Sydney – with the homeless sleeping in ‘huddles’ in parks and around the perimetres of railway stations, so as to stay relatively safe. More than seven per cent of the Northern Territory lives homeless – one of the world’s highest homelessness rates outside natural disasters and civil strife. It is a similar rate of homelessness in the Kimberley.

One in four homeless identify as Aboriginal and/or Torres Strait Islander peoples despite that overall they are less than 3 per cent of the national population. More than 30 per cent of the homeless are of people who have been born overseas.

What are our governments and our shires doing for the homeless? The answer is next-to-nothing. The Stringer has launched a campaign for homeless friendly precincts – for safe spaces for the homeless, for that sliver of human dignity. There have been commitments made by shires – the City of Perth, the City of Fremantle and the City of Wanneroo in terms of Perth’s shires – to establish 24/7 drop-in-centres and homeless friendly precincts. We are talking to other shires. The City of Adelaide has also made a commitment. The homeless are waiting.

In Perth, like elsewhere, the streets are unsafe – there are no protective factors. They face sexual predation and violence. Since March some of the city’s homeless have gathered in the heart of the city, in a park precinct – Heirisson Island, known originally as Matagarup (the Noongar/Nyungah/Bibbelmun name). The City of Perth has raided the island on nine occasions in attempts to move on the homeless campers; dispossessing them of their tents and belongings. But where are the homeless to go?

The island camp has been a safe space for homeless families, for toddlers and bubs. Earlier in the year a chronically young homeless woman spent weeks on the island. She went into labour on the island and gave birth to a girl that she loves dearly but both continue to live homeless. I reflected what would have happened had she not been in a safe space, had not been with others but had been in some condemned squat or alone in some alleyway. Jennifer Kaeshagen and I knock ourselves out trying to find homes in particular for the large homeless families, and we have here and there. It makes little sense to me that we are able to find accommodation for large families that for instance the Department of Housing is not able to.

The safe space of Matagarup makes it easier to work with the homeless in trying to secure them accommodation, or to improve their lot, or to link them up with the various service providers.

Despite the obvious good work of many within the Department of Housing, some of their policies are outrageous in that they do not prioritise large homeless families, or that they do not facilitate a needs-basis approach, and that instead they go with a first in first served basis. There would be a public outcry if our hospital emergency services worked with that approach. Governments should be ashamed of themselves that they have not sorted all this. They should be ashamed too of the fact they provide very little public housing for large homeless families. Ironic, because they have set in stone policies that their Department of Housing must adhere to, that public housing provided to families must ensure there is no overcrowding, and that large families must only be provided five or six bedroom homes. There is so little stock of public housing with five and six bedrooms that the large homeless families stay homeless. It is abominable that the Department of Housing would deny a homeless family a three bedroom home because policy states they must be provided a five or six bedroom home and instead the end result is they stay homeless.

Homeless Friendly Precincts – where there are showers, laundries, small storage facilities, treatment areas, safe spaces and anything else shires are prepared to provide – should be the minimum standard in our response to the homeless, a no-brainer. Shires and State and Territory Governments should be rushing us eager to set up Homeless Friendly Precincts, without delay. The glacial pace of change is not only frustrating, it decimates families, people and costs lives.

Large families on our streets

Homeless family living in a tent near Perth offered housing

One in four of Australia’s homeless are children

Thousands of homeless children, toddlers are the forgotten