When official reports obscure as well as explain: An analysis of the report on Cockburn Sound mass fish deaths 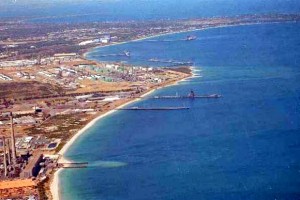 The Department of Fisheries has released the report of its investigation into the massive fish die-off that occurred in Cockburn Sound in late November and early December 2015. Over 2000 fish and 15 species died.

An earlier piece I wrote on the environmental crisis is here and here.

However, like many official reports, the Fisheries report obscures as much as it explains.

It is, for example, silent on the extent to which thermal stress resulting from increased water temperature and oxygen stress caused by human induced climate change and global warming is a factor in the deaths in Cockburn Sound. 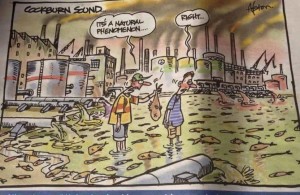 The Report finds that the immediate cause of the mass die-offs was an algal bloom of diatoms (of the genus Chaetoceros). This group of diatom have been implicated in fish kills both internationally and around Australia.

Diatoms are the diameter of a hair, have spine-like bristles (setae) made of silica, and cause physical irritation to fish gills. The Report found that algal numbers reached significant concentrations and the sectioned gills of freshly dead fish showed considerable physical irritation. 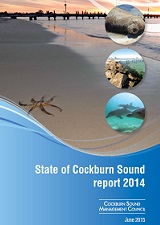 It notes that the Department of Environment Regulation assessed industry monitoring data and inspected local drainage systems, but no potential pollution sources were identified. The only substantiated spillage identified was approximately 500 kilograms of canola grain at the CBH grain loading jetty, however there was no evidence of chemical contaminants in the spilt canola.

The Report found that the Southern end of the Sound was the likely source of the bloom.

The report links the fish deaths to poor water quality at the unstable southern end of the Sound. The area has historically had poor water quality issues including low dissolved oxygen levels associated with poor flushing of the embayment.  The report found that weak tides during the event may have been a contributing factor. 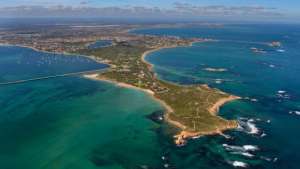 The southern end of the Sound is the site for  a proposed marine, canal and residential development between Cedar Woods and Landcorp, which includes a 500 boat pen, canal development, chalet style accommodation and an entertainment precinct.

Despite concerted opposition, the project received environmental approval in 2014 and has Government and Opposition support, despite the EPA finding that the proposed development could worsen water quality in the southern part of the Sound.

There has been strong and concerted public opposition to the  proposed development by environmental groups, campaigners and local communities and residents.

The Greens MP Lyn Mclaren used the release of the Fisheries Report to call on the Barnett Government to shelve the proposed development:

“The two causal factors of the fish kill were the algal bloom and dissolved oxygen. Both of these are known to be a problem in the southern area, so we should be working on improving the water quality at that area of the sound, not risking it by building a canal estate there.”

The Report does nothing to dispel claims made at the time by the Barnett Government and government authorities that the mass die-off was a ‘natural occurrence’.

Suggesting that an environmental catastrophe like this is a ‘natural occurrence’ implies it is a matter of chance and the workings of nature, rather than of human design and government and industry action and inaction. Events become arbitrary unforseen acts of nature, rather than manifestations of an economic and political order that is designed to maximise economic growth and profit at the expense of the ecosystem and the people and communities who share that ecosystem.

As Piers Verstegen from the Conservation Council of WA noted, this event should be a serious wake up call for the state of Cockburn Sound, not explained away as natural occurrence.

The Report does not identify the underlying causes of water quality issues in the Sound that resulted in the blooms that killed the fish, other than to identify three possibilities-nutrients, higher than normal water temperatures, and reduced flushing conditions. But we are no clearer in understanding the underlying cause(s) of the diatom bloom.

Clearly the marine environment in Cockburn Sound is changing for the worst and fish and marine life are struggling to keep up. It is essential that we know the exact cause of those changes. Without that understanding how can the Department and those responsible for the health of the Sound and its environment take the necessary action to ensure that water quality is improved and fish stocks protected?

The southern pocket is environmentally important to the health of the sound. It is an area where sea grass is reasonably healthy and is also a fish nursery for a number of fish species.

Given its focus on the fish deaths, the Report is perhaps unsurprisingly silent on the likely impact of the proposed marina and canal development on water quality and fish stocks in the southern end of the Sound.

This is despite the likelihood that the proposed marina development will worsen water quality and threaten seagrass in the southern end of the Sound, thereby threatening fish stocks, bird life and marine life even further.

The report is also silent on the ‘elephant in the room’- the extent to which thermal stress resulting from increased water temperature and oxygen stress caused by climate change and global warming is a factor in massive fish deaths like those that occurred in Cockburn Sound.

Ministers, politicians, authorities and government agencies seem unwilling to publicly acknowledge this issue and have avoided any use of the words ‘climate change’ in relation to the deaths.

But there is mounting evidence about the impact of climate change on the world’s marine ecosystems and their vulnerable inhabitants and the role of climate change as a causative factor in mass die-offs of fish, marine life, whales, starfish, coral and marine invertebrates.

A 2015 study published in the Proceedings of the National Academy of Sciences by scientists from Yale, UC Berkeley and University of San Diego concluded that mass die-offs of birds, fish and marine life have grown increasingly frequent and severe, hiking at a rate of 1 per year over the past ten years.

On the effect of climate change, the report noted:

“… processes directly influenced by climate — including weather extremes, thermal stress, oxygen stress or starvation — collectively contributed to about 25 percent of mass mortality events.”
According to the study, the mass kill events of the greatest magnitude “were those that resulted from multiple stressors, starvation, and disease.”
Writing in Common Dreams, Deidre Fulton links animal die-offs across the globe to growing alarm about the deadly impact of climate change on the world’s ecosystems and their vulnerable inhabitants.
Fulton lists examples of recent mass die-offs linked to the effects of climate change, including:

In the Washington Post, Sarah Kaplan writes that unexplained die-offs, abnormally large strandings and worldwide coral bleaching are bigger than almost anything else on record:

“Incidents like these are often mysteries to be unraveled, with scientists sorting through various explanations—hunger, habitat loss, disease, disorientation—for the mass death. But in a swath of recent cases, many of the die-offs boil down to a common problem: the animals’ environments are changing, and they’re struggling to keep up.”

Here in WA, the response of the Barnett Government to the Cockburn Sound environmental crisis has been shambolic and inadequate.

The Environment Minister has been missing in action. At the height of the crisis the Minister claimed that water quality in the Sound was improving. The Government claims that no change is needed in the monitoring of the Sound and has instigated “bare-bones” environmental monitoring of water quality and only released a tender for that after the crisis. A former Manager of the Cockburn Sound Management Council (CSMC), claimed the tender was “bare-bones” environmental monitoring to allow the council to meet the requirements of the State Environmental Policy.

The failure of the Barnett Government and the responsible authorities to provide a convincing explanation of the underlying causes of the water quality issues that caused the mass fish die-offs in the Sound, combined with their unwillingness to publicly acknowledge thermal stress resulting from increased water temperature and oxygen stress caused by climate change and global warming as a significant factor in the fish deaths, only leads to greater disbelief and cynicism among ordinary citizens concerned about the health of the Sound and the viability of fish and marine life stocks.
Categories : Environment