When Michael met Mina – a review 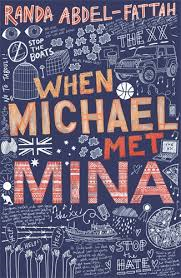 I have to make a disclosure right at the very start of this review. I am an unabashed Randa Abdel Fattah fan. I have been ever since I read her book “Does my head look big in this?” That assessment of Randa was then confirmed when I read her “Ten things I hate about me” So I approached her latest book “When Michael met Mina” (WMmM) with a huge amount of trepidation. Trepidation because I wondered if Randa would be able to maintain those exacting standards she had set herself by her body of previous work.

I need not have worried. Randa delivers a brilliant piece of work yet again. When Michael met Mina is even more interesting than the others of her work that I have read. Yes, WMmM is a story about young and first love. But like Randa’s other work this one tackles a host of other issues. It addresses Stereotyping, Refugee Policy, Racism, Islamaphobia and all the issues that we, in the Multiculturalism space deal with on a daily basis. It does not do it in a didactic fashion but is a clever and sometimes gentle yet very firm rebuke of people perpetrating the evils of all of those issues.

Randa has a very evocative turn of phrase. Her description of the environment that Mina and Michael find themselves in is quite brilliant. “If I concentrate hard enough I can bring the place alive: the fishmonger’s van rumbling around the corner and over the uneven asphalt of the alley behind the mall adjacent to our house. The pungent scent of fish wafting out of the fish shop at the entrance to the mall. The fruit and vegetable store teeming with early morning shoppers, nobody queuing up, everybody somehow managing to buy their stuff without any fuss. The group of Sudanese men sitting at the corner coffee shop, smoking, sipping coffee and talking…”

Mina could be my daughter, she could be yours. She is an Australian of Afghan origin. And she is in a school for the well heeled, because she has won a scholarship to study there. Her mum and step father do what all of our migrant parents have done for us, they sacrifice their lives so as to ensure she is able to access the best of education and resources. And she faces all of the racism that a number of us have faced. And she meets Michael, the son of a man and woman who chair an organisation committed to minimising immigration, refugee numbers and minimising any “diminution” of white Anglo-Celtic culture. This in itself is a recipe for head to head clashes. It is! But these clashes allow Randa to gently remind us that almost every one of the people coming in on humanitarian and refugee visas are facing these adversities every day. How it plays out in the case of Michael and Mina is realistic and highly probable.

The issues that Michael faces with his parents are reminiscent of those that Philip Ruddock and his daughter faced (publicly) back in 2002. The memories Mina has of her little brother, Hasan are a stark reminder of Aylan Kurdi and the death of a child in the refugee journey.

One paragraph that captured my attention and I believe every person who has not had any contact with a refugee/asylum seeker coming to this country needs to read is this:

Mina- “When I first arrived in Australia I was just a child. The nightmares visited me every night I was in detention. My Mum was broken from the journey and the loss of Hasan. We were like two injured animals caught in a trap, cowering in the lights, unable to comfort each other. When we were eventually processed and released into the community, we slowly rebuilt our lives and the nightmares faded. It took longer for the bedwetting to stop. “

And later Mina speaks of her life in Kabul in these terms “I’m walking along a deserted street in Kabul. I’m alone. As I walk past each house, the front door opens, revealing the barrel of a gun pointed at me. Then the gun is withdrawn, the door slams shut, and I walk on. House after house, pointed gun after pointed gun. I don’t stop. I don’t scream. I just keep on walking. It’s only when I see my father standing at the end of the street, half submerged in a grave that I start to scream.”

This is harrowing at best and is also a valuable insight into what these children have had to endure. To then be placed in detention, as we have done in Australia since the late 90’s is simply going to perpetuate that experience.

Randa’s work is probably primarily aimed at the Young Adult. However by writing in that fashion she provides a piece of work that is not threatening to adults with entrenched views. It is a work that is outstanding. It is another piece of writing that comes with clarity of meaning from a significantly talented author. Her work is admirable and enlightening. It should be compulsory curriculum material in an Australia that is increasingly multicultural today.

“Randa Abdel-Fattah was born in Sydney in 1979. She is a Muslim of Palestinian and Egyptian heritage. She grew up in Melbourne and attended a Catholic primary school and Islamic secondary college. Randa has worked as a lawyer, human rights advocate and community volunteer with different human rights and migrant and refugee resource organisations. Randa has used her opinion editorials in newspapers and TV and radio media appearances as a medium for expressing her views about racism, multiculturalism, human rights, the occupation of Palestine and asylum seekers. She is a regular guest at schools around Australia addressing students about her books and the social justice issues they raise. Randa has also been a guest at international writer’s festivals. She recently completed her PhD in the Department of Sociology at Macquarie University, researching Islamophobia, racism and everyday multiculturalism in Australia. Randa lives in Sydney with her husband and three children. She has just released her latest novel, When Michael Met Mina, which was inspired by her PhD fieldwork examining issues of race in Australia.”