When defending the environment gets you killed 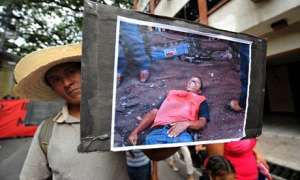 Members of the Peasant Unified Movement of Honduras, carry mock coffins bearing pictures of people killed in land conflict clashes. There were 109 activist deaths between 2002-13 in Honduras, making it the world’s second deadliest country for communities defending natural resources. Photograph: Orlando Sierra/AFP/Getty Images from The Guardian

Activists in Latin America and Asia Pacific are most at risk.
The report Deadly Environment:The Dramatic Rise in Killings of Environmental and Land Defenders found that the murder of environmental and land rights activists worldwide has tripled over the past decade. The report found that 147 activists were killed in 2012, compared to 51 in 2002. The death rate is now an average of two per week.

Almost none of the killers have faced charges.

The report argues these killings are just the tip of the iceberg and the actual numbers being killed are far greater. Under-reporting and difficulties verifying killings in isolated areas are a significant problem. Reports from many countries – a number of African countries, Zimbabwe and Myanmar- where civil society groups are weak and the regimes are authoritarian, are not included in the count.

The environmental activists are being targeted for killing in a struggle between those trying to protect and conserve the natural environment and buying power. The report points to competition over land and natural resources resulting from industrial logging, mining and land rights as the trigger for the murders.

The vast majority of activists killed are resisting the operations of global corporations, including logging companies, agribusiness corporations and mining and resource corporations.

The Democracy Now story includes an interview with José da Silva, a Brazilian conservationist and environmentalist who campaigned against logging and clearcutting of trees in the Amazon rainforest. In 2011, José and his wife Maria were murdered by masked gunmen. José’s ear was ripped off as proof of execution.

They’re often ordinary people who are resisting these operations. As I’ve said, it’s very difficult often to pinpoint the exact perpetrator. There’s a very startling low number of convictions. But what we have seen is that they are resisting operations to these companies. And we do feel like it’s down to the companies to make sure that they’re not being associated with this kind of violence, and also that governments need to monitor this problem much more clearly and much more actively and protect those citizens who are facing these threats, ensure that any perpetrators are brought to justice ………………………………………

Mr. Penetra was one of the most striking cases in our report, because we published our first round of research into this issue shortly before the Rio summit, and we tried to issue a wake-up call to the international community to say that we felt that this problem was increasing and that the threat to environmental activists was increasing, just before the—before delegates gathered to discuss better ways to protect the climate and the environment. Now, Mr. Penetra was an advocate for fishermen’s rights who had been fighting for the rights of local fishermen against the—against the advance of oil operations in the area. And now, the day after the summit ended in Rio, Mr. Penetra was abducted, and he was found executed with another campaigner just a few days later. We really think that sends out a symbol about how much needs to be done. He was one of 18 activists who were murdered in the month after Rio, which shows how far we have to go and how much work needs to be done by governments and the international community to make sure that these people who are laying their lives on the line to protect the environment are getting the protection they deserve.