“When Bamboo is old, the bamboo sprouts appear” 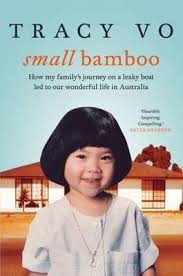 –          Ancient Vietnamese saying meaning that Vietnam will never be annihilated.

Tracy Vo is a journalist at Channel Nine in Perth.  The first time I spoke to Tracy was when she covered the funeral of Kuldeep Singh, an Indian born taxi driver killed in a car crash by a drugged and drunken driver named Fogarty. Much has been written about that particular incident and there is little to be gained from rehashing those details. Tracy, a number of other journalists and I stood outside the funeral chapel where the service was conducted and I translated some of the comments being made by the Sikh Presiding Master of Ceremonies as best I could. I had heard of Tracy and read about the fact that she had come home from Sydney to help her ailing father and ageing parents with their life challenges. Even as I had read that article about her sacrifice to do this I was struck by her concern for her parents and her filial affection. At the risk of a blatant stereotype I mused about the nature of Vietnamese families and their relationships with each other. To give you an example of these relationships let me point to two incidents that I have spoken about that emphasise the value of family to the Vietnamese.

Some years ago I was made aware of a group of Vietnamese asylum seekers who had made their way to the Philippines by boat. When the young Vietnamese of Perth heard about this a group of them numbering around 10 all applied for leave from their employers here in Perth and paid their own airfares and accommodation expenses to go there and assist that community there with the paperwork that was required to be completed. The second incident involves the community here that when they have their gatherings each weekend, every person coming to the event would place some money (an amount that they could afford) into an urn at the front of the building. At the end of the day that money was accumulated and anyone from the community who fell on hard times was allowed to take funds from this pool at no interest rate. These two incidents stress the nature and importance of community to this group.

Tracy chose to come home to look after her parents. When I looked at the photos of her Dad in the book I was certain that I had seen them or met them before. I recognised her Dad from his trips to the hospital next door to my office here in Nedlands Perth. I have seen him here when he has come for his medical treatment. The other place where I have seen Tracy’s parents is at an exhibition of the Jade Buddha in Perth some years ago where they were integrally involved in helping anyone that needed help.

Tracy’s book is primarily about her parents. It is about their life and their sometimes arduous and dangerous journey to Perth. Their journey is not unique (and Tracy does not pretend that it is) and we have heard that story many times over as the Vietnamese community has established themselves in Australia. However, Tracy’s telling of it is extremely appealing to the wider community. Tracy does not pull punches and there is a certain credibility by retelling the stories of her Uncles, aunties and parents.

The last part of the book was about Tracy’s own story. She addresses an issue that I have argued is the “next big issue”. As I have said in other articles on this site:

However, if I was to nominate a significant area of concern I would point to the youth of the community and observe that there are members of that community that represent a high risk group in so far as their integration into Australian society is concerned.

There are many reasons for my taking this view. The most pertinent reason is the fact that these children are caught between two or more cultures and this is particularly so in their formative years. Some simple and obvious examples of the outcomes of being caught between the cultural values of two communities can be, inter alia, as follows:

         Children having access to things that they may not have had in their countries of origin (e.g. mobile phones, access to casinos/gambling and alcohol)

One of the most common outcomes of being trapped between cultures can be the formation of like minded individuals into a collective. The factor common to all the members of this collective is usually their cultural heritage. A contributing factor in this area is the approach of the immigration authorities of western nations when confronted by refugee children without the necessary identification papers. This approach has seen us allocate an age based upon the physical development of the child. On the basis of this age we then allot the child to a classroom for their education. This approach ignores the fact that the child may have come from a society where their school has been bombed thus leaving them with little or no education. The children lose any sense of self actualisation in the classroom and will start looking for this out on the street with others of a like mind. The policy position has then involved the regulatory authorities treating this group of children as a gang and applying all the strictures that would normally apply to an organised gang.

In small Bamboo, Tracy discusses the issue of being born and reared cross culturally. She says at one point that her parents “wanted us to fit in and they thought it would be easier for Australians to call us by our English names”. The confusion that results from being caught between the norms and mores of the two cultures can be quite stark and therefore alarming. Tracy dealt with that dichotomy with a great deal of practicality. Yes, she was the victim of racism and vilification. But none of that was to sway her from her desired aim of being involved in Media. She could have gone down the path of being the victim but she chose not to. Hers is a study in getting the job done!

Tracy may not have intended to be held up as a role model for others in the community. However, in a country that has in media very few non Anglo Celtic faces and accents other than on SBS, she does occupy a position of considerable attention. She will be a role model for every young girl or boy with surnames such as Ng, Nugawela, Thanh, Vinh, Singh, Menon etc. Anyone of these people reading her book will understand that their fate and future lies in their hands and not in the adoption of a “victim mentality”.

Tracy Vo’s book is attractive at a number of levels. People involved in the media industry will recognise her path to the Channel Nine position. The people she met along the way are people whose names are well known to most of us. Les Welsh, her News Director at Curtin FM, Tina Altieri, one of her early role models, Peter Harvey, Laurie Oakes and Peter Overton inter alia are all mentioned as influencing her career.  This is evident in the professional way she approaches her work today.

People in the wider community will see her book as a confirmation that with hard work and persistence you will achieve success. For those from the culturally and linguistically diverse communities, they will recognise the vexed issues of dealing between cultures.

There is something  in this book for everyone. It is recommended reading for different groups and delivered by someone with simplicity and passion. I believe that there is another book somewhere lurking in Tracy’s mind. This hopefully will transpire in the not too distant future. This book will be much more about Tracy Vo and less about the Vo family. Because hers is a story that needs to be told in more detail.