Wheelchairs for Kids – improving the lot of others – 73 countries 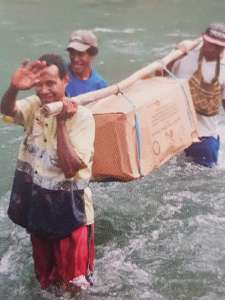 Wheelchairs for Kids is one of those one in a million charities where everyone is a volunteer, where no one draws any form of remuneration. In its three decades since establishment, it has donated rough terrain children’s wheelchairs to 73 countries. More than 150 volunteers, the majority retirees, are rostered to manufacture the wheelchairs at the Wheelchairs for Kids factory in a northern Perth suburb.

“We are changing lives, all over the world,” often says volunteer workshop manager, Brother Ollie Pickett.

The wheelchairs, with puncture proof tyres, are manufactured to last the duration of a childhood. They are adjustable wheelchairs.

“We have produced more,” but that depends on donations which are needed to buy the materials.

“Our best fund raisers are ‘you’ talking about us.”

Wheelchairs for Kids understands some of the difficult terrains where its wheelchairs are needed.

“Our Technical Progress Group is still working on making improvements. The latest being a much stronger front swivel wheel and tyre as we have had a few reports of cracking – wait for it, after 4 years of being pushed through stony and muddy ground. We aim at perfection.”

The unmet need in our world’s most difficult terrains, remotest regions, in war ravaged nations is heart breaking and Wheelchairs for Kids has the volunteers to manufacture and donate double and triple its annual output. It’s only the materials that need buying.

The wheelchairs reach some of our world’s remotest homelands. 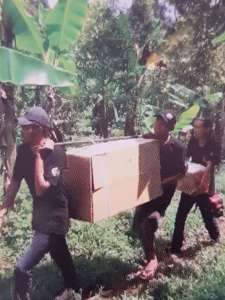 Since 2007 my association with this one in a million charity, I have raised hundreds of thousands of dollars to ship rough terrain children’s wheelchairs to war ravaged countries – including Iraq, Libya and Syria.

Alongside a friend I met while in the tertiary sector we shipped more than a thousand rough terrain children’s wheelchairs to Iraq over a couple of years – 340 wheelchairs at a time.

Riyadh Al Hakim was a former Iraqi refugee who one day walked into my office at Murdoch University. He studied at Curtin University and would graduate with a Bachelor in International Studies. He was involved with a program I founded, Students Without Borders.

Students Without Borders flagship project was a computer recycling program. Students and community members refurbished computers that were donated to us, that were being superseded, and computers we collected from verges.

From 2004 to 2009, Students Without Borders donated 55,000 computers to anyone without one, Australians and to students and communities abroad.

Riyadh walked into my office and asked if we could donate rough terrain wheelchairs to children in Iraq.

I have never forgotten the day he walked into my office – mid 2006.

During our conversation he said, “The years of sanctions have deeply affected Iraqi society and people have learned to survive individually and have lost the sense of community and caring for others.”

He came from a region of Iraq devastated by the impacts of war. Riyadh described amputee children dragging themselves through the streets.

Riyadh described to me a pre-invasion Iraq, one which I knew to be so, where it did not matter whether someone was Sunni or Shi’ite, and marriage and business between Sunnis and Shi’ites occurred on a daily basis. He said, “Till this war was started on us, no Iraqi ever asked me whether I am Sunni or Shi’ite. Never.”

Riyadh asked me if I could help some of the children – amputees. We teamed up and organised for 327 rough terrain wheelchairs manufactured in Perth, Western Australia by volunteers. We readied the shipment in 2008 to leave Fremantle port to Um Qasr port in Basra but the UN sanctions got in the way and all the shipping companies stated it was too dangerous.

We didn’t give up. We contacted a then Australian Senator, Christopher Evans. The Senator empathised and organised for the Australian Defence Forces to fly by Hercules the cargo from Sydney’s Moorebank to Kuwait. The cargo was driven across the continent from Perth to Sydney. In Kuwait the Australian Defence Forces transported the cargo of wheelchairs to the Iraqi border where Riyadh and others met them and the 327 children’s wheelchairs were transported and donated to the towns of Najaf, Ramadi and Samawa.

With the vital fund raising assistance by a Lebanese NSW parliamentarian, Shaoquett Moselmane, a couple of years ago we shipped 340 rough terrain children’s wheelchairs to the Syrian port city of Latakia. These rough terrain wheelchairs come with puncture proof tyres. The wheelchairs are manufactured to last through a childhood.

When it was learned that we had shipped a container to Syria I was called by two major Australian news mastheads suggesting that this deed could be viewed by Australians as a transgression, of aiding “the enemy”. I responded we are not armament smugglers but helping children – amputees. The hatchet job never took place. Soon after we shipped another container of rough terrain children’s wheelchairs to Latakia; the tragedy is beyond mere words.

It breaks my heart every time a shipment leaves; to the Congo, Libya, Lebanon, Iraq, Afghanistan, to wherever bombs, missiles, human-made-abominations have maimed children, made them amputees. 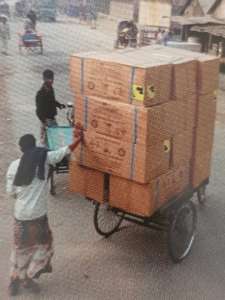 One amazing individual is Lebanese born NSW parliamentarian Shaoquette Moselmane. He has raised funds to sponsor more than 2,000 rough terrain children’s wheelchairs to seven countries. In 2015, Shaoquett and I shipped more than 500 children’s wheelchairs to provincial China. In July, 2015 together we visited Shanghai and we’re taken on a tour of a Shanghai orphanage – the world’s largest – for abandoned babies and toddlers with disabilities. During our visit of the orphanage we learned that 160 children were in need of wheelchairs. We looked at each other and then made the commitment to the orphanage director, Lucy, that we would meet this need. With the funds raised, months later Wheelchairs for Kids shipped the container to Shanghai.

In June, Wheelchairs for Kids will ship enough wheelchairs to Indonesia’s Lombok to meet the island’s total need. 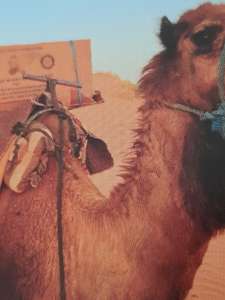 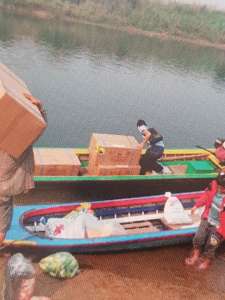 It doesn’t end – in recent times Wheelchairs for Kids has reached children in Gaza, Mongolia, Pakistan, Sierra Leone, the Congo.

Despite all the wrong in our world, there’s good, there’s love. Despite the abomination of millions killed in wars and civil strife each year in our world, millions maimed, millions who are refugees, the billions in poverty, we have to stay solid in the love, in never giving up.

You can find out more about Wheelchairs for Kids here – https://wheelchairsforkids.org/

Example is our only immortality. 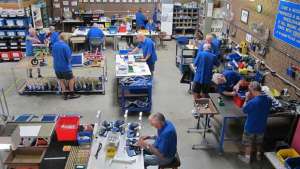 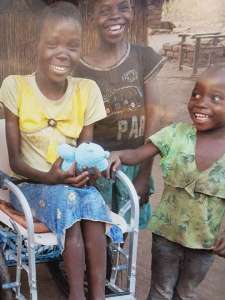 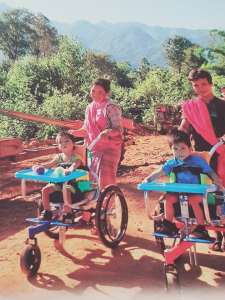