Shelter SA is the peak body for housing in South Australia funded through the State Government’s Housing Minister’s Advisory Fund.  Shelter SA is a member organisation and members consist of a diverse range of stakeholders including Government and non-government agencies, private industry and interested individuals.  Shelter SA advocates for policies and services that address housing affordability, especially for people on low incomes who may also be living with disadvantage.  Shelter SA has a particular focus on the issues faced by Aboriginal and Islander Peoples in housing and homelessness and regularly communicates with a large (500+) network of Aboriginal and Islander Peoples.  A smaller number of those who belong to the network meet regularly to share information, assist Shelter SA with submissions and policy platforms and stay informed. Shelter SA also monitors government policies and outcomes and participates in the public realm to raise awareness about housing issues.

Safe, affordable and culturally appropriate housing is particularly difficult to attain for many Aboriginal and Islander Peoples living in South Australia.  The majority of publicly owned housing is built to accommodate small nuclear families consisting of mum, dad and two kids, rather than catering for the extended family groups and visitors that are an everyday part of life for Aboriginal and Islander Peoples.  When there are no alternative housing options, Aboriginal and Islander Peoples can find themselves without adequate space in their homes and experience heavy drains on their financial and material resources.  The term used to describe this situation is “overcrowding” and it has crept into the vocabulary of all Australians however, Shelter SA argues that the real problems are inappropriately designed houses, mainstream housing policies and service delivery and no other affordable options.  In turn, this can create social problems for families when they are unable to avoid difficulties by moving away to other accommodation.

On a National and State level, there is a lack of political will to address “overcrowding” by returning the control of public housing for Aboriginal and Islander Peoples to them.  The majority of public housing is mainstreamed, despite a large body of evidence arguing that this approach does not solve problems, but rather creates additional barriers for people to sustain their basic human right to food and shelter, much less to take up opportunities for education, employment and good health.  Kevin Rudd spoke about closing the gap and increasing representation of Aboriginal and Islander Peoples in our universities at the recent 5th anniversary of the apology breakfast but he did not mention self-determination or the barriers that a mainstream education system present.  How people can access higher education if they don’t have a safe and affordable place to live?

[1] See Brian Butler’s explanation of the use of the term “Aboriginal and Islander Peoples” http://brianbutler33.wordpress.com/use-of-the-term-aboriginal-and-islander-peoples/

We consistently see Aboriginal people overrepresented in the quarterly Specialist Homelessness Services data compiled by the Australian Institute of Health and Welfare  – only the numbers of people who have attempted to access homelessness services are reported but there is no means of recording those who cannot overcome the barriers to current service delivery methods – the real needs and cultural barriers remain hidden from view. 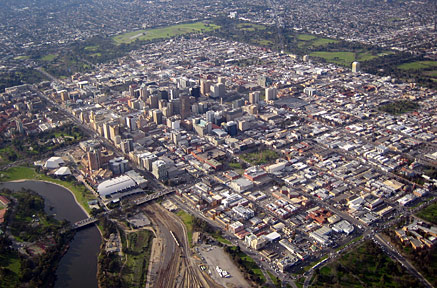 This photograh shows the wide areas of green that border the city square of Adelaide.  These park lands are often used by homeless people when they have nowhere else to meet or sleep.  The Adelaide City Council has been in the media lately due to their discriminatory “cease-camping” by-laws and time limits.  The ACC takes no responsibility for homelessness placing the problem of vulnerable people sleeping rough squarely on the shoulders of the State Government, despite calls for community solutions and support for the complex situations homeless people experience.  The first signs erected in South Australia, written in Pitjantjatjara will not say “welcome to Kaurna land”, they will say “no camping”.  Just referring to people as “campers” serves an image that they are on a pleasant holiday with tents, sleeping bags and fishing rods and the ACC Mayor, Stephen Yarwood seems to be full of contradictions claiming “I am not racist”.  See the ABC’s story at http://www.abc.net.au/worldtoday/content/2012/s3626536.htm

Shelter SA networks widely and attends many meetings with senior bureaucrats, policy makers and people working in the housing and homelessness sectors.  Aboriginal and Islander Peoples’ housing and homelessness issues are rarely talked about and there are often meetings where there are no Aboriginal people present.  Shelter SA consistently raises these issues using various mediums and recently gave a verbal presentation about the mainstreaming of public housing at the Australian Housing Conference in Brisbane.  To view relevant Shelter SA submissions to legislation, policy reviews and articles, to join our mailing list or become a member please visit our website www.sheltersa.asn.au, as we specifically aim to increase the number of Aboriginal and Islander Peoples and organisations amongst our membership.  You can also visit our Facebook page and like us http://www.facebook.com/pages/Shelter-SA/276226571021.

Shelter SA Draft Homelessness Bill Exposure Submission July 2012 extract – Attention must be paid to Aboriginal understandings of Homelessness in the new Act.  Mainstream definitions of homelessness are inappropriate for Aboriginal people and must be redefined as losing one’s sense of control over, or legitimacy in, the place where one lives, with three categories, public place dwellers, those at risk of homelessness and spiritually homeless people (AHURI, 2004).

Every Chance for Every Child Submission – extract – The provision of affordable, secure and appropriate housing must be addressed in urban, regional and remote areas and special attention must be paid to children who are Aboriginal or culturally and linguistically diverse, who can face entrenched disadvantage, racism, disconnection from services, and challenges to accessing housing.  While there have been some improvements in Aboriginal children’s health reported in Closing the Gap, there remains an unacceptable level of Aboriginal infant mortality.  Housing is part of improving this situation

Housing Improvement Bill Submission – extract – Work completed to date on maintenance in the APY lands is a good start but concerns regarding the capacity of the current infrastructure to meet the increased demand associated with the new properties and upgrades must be addressed as an urgent priority for Aboriginal people.

Parity – Challenging Policy Rhetoric in the next NAHA:  Can Aboriginal and Islander Peoples ever attain “the same housing opportunities as other Australians”?