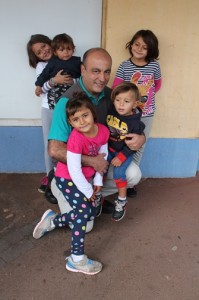 The writer of this article, with five of the seven children who are in need of a secure home

Last week, we brought to you the sad story of six school age children homeless on the outskirts of affluent Perth. This week, we bring another sad story of seven homeless children, the youngest 14 months old, living homeless once again on the outskirts of affluent Perth, and in their desperation finding shelter in a rundown two room asbestos riddled dwelling without functioning utilities. Seven homeless Noongar/Bibbullmun children while the State Government pretends it will deliver an ‘in-kind’ $1.3 billion native title deal to the Noongar/Bibbullmun peoples.

The State Government, its departments and Government funded agencies and contractors have known of these families from the commencement of their dire homelessness. They have failed to house them, interim or otherwise. Furthermore bizarrely they stand in the way of housing these families. The Western Australian Department of Housing has a policy that requires a minimum number of bedrooms for large families. In regards to the family of six children, they refused to consider accommodating them in a house with less than five bedrooms. With these seven children they insist they can only consider five or six bedrooms, nothing less. With State Housing there are only ever a handful of five and six bedroom homes so in effect the families will wait forever and a day.

I was dumbfounded with this policy demand by the Department of Housing representatives when speaking to them. I was from a family of six children and we started life in a working class home of 3 bedrooms, with four boys in one room and two sisters in the other room.

The family of seven children have fallen on hard times – a relationship breakdown and rising cost of living pressures pushed the family into unforeseen hard times. They were struggling to meet a $500 plus rent but they were not in arrears. The outrageous private property market is giving birth to an underclass of poverty, with worse yet to come.

Mother Melody said, “We just need a roof over our heads, our family is strong and my kids adore each other.”

“We only need someone to give us a chance.”

“We have moved from place to place and have been homeless and in our desperation have found shelter in this asbestos riddled home where nothing works. We need to get out of this place.”

The family includes Melody’s 62 year old mum, and with a ruthless private rental housing market denying them a break, they turned to the Department of Housing. The Department of Housing placed the family on the priority housing waiting list, which is for families that are homeless or at-risk of homelessness – but in Western Australia alone there are 3,000 families on this priority waiting list, most of them in Perth.

“The Department of Housing told us that we will be waiting a long time, years in fact. They told us that even with the priority waiting list that they are still trying to house families that have been on the list from 2012. And then they tell us that they can’t let us move in to a three for four bedroom home, that it’s their policy. So what hope do we have of a getting a home?”

“We went to the Department of Child Protection for some assistance, maybe with crisis accommodation but the branch we went to, the lady there told us they can’t help with accommodation and that we should go out and buy tents and camp out of sight.”

“We went to crisis accommodation centres and they turned us away saying no room or that they couldn’t fit so many of us together.”

In the midst of all this turmoil and heartbreak for the family, they have stayed solid, with the school age children attending school. “We need to get my kids to school so they have a shot at a good life.”

“We only need a home so we can give the children stability, security, to give them the lives they deserve.”

There is an extreme poverty and homelessness crisis not only in Western Australia but nationally, especially of families and children, that the mainstream media is neglecting, and where it has to do with Aboriginal families and children there is even less mention. This is the world’s 12th largest economy, second wealthiest nation (per capita), with the highest median wages in the world. But alongside this affluence there exists grinding poverty and horrific homelessness levels. What are Western Australia and the Northern Territory doing with their mining booms? In both the State and Territory Budgets the poor and the homeless did not get a look in. Yet Australian homelessness is at its highest levels in WA and the NT.

The Stringer has not only sustained coverage of this crisis however also crafted questions on the housing crisis and homelessness and on the bizarre policies of the Department of Housing on the minimum number of bedrooms as reported above. The questions are to be tabled in Parliament. We have asked Government to initiate a review of policies of the Department of Housing.

A fortnight ago, I met with another family living homeless in Perth’s outskirt bush, just off a major highway. The Grandmother and the Father drove from their remote community near the Northern Territory border to Perth. Why? So they could give their six children – aged 4 to 16 – a quality education.

“The Department of Education shut down the school in our community and the nearby schools were 94 and 155 kilometres away and also of poor quality.”

“The quality of education in the remote is as poor as it gets. We’re years behind in the standards and levels to the city kids,” said the Grandmother.

The family spent more than three months in an out of sight bush camp half a kilometre off a major Perth highway but still within the city’s outer limits. They had several tents pitched, yoga mats that they slept on, a tarpaulin to protect from the rains and the vehicle that they use to transport the children each day to school and to sport.

At the time, the Grandmother said, “I get up each morning, at 6am, to prepare them for school. They have breakfast and then we drive them three suburbs to two different schools. My son and I wait nearby their school till their day is done and bring them home. We cannot afford the petrol for two trips.”

These are two of many families. The Australian Bureau of Statistics and the Census, any survey for that matter, would miss these families altogether. Therefore they do not exist.

Other reading and links:

Homeless family living in a tent near Perth here: