“What about Lore and Culture?” Rosalie Kunoth-Monks 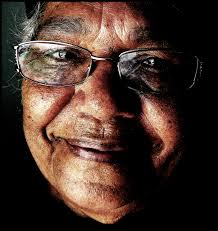 “I am not the problem and nor are my People, the tribal People,” says the respected Arrernte/Alyawerre Elder, Rosalie Kunoth-Monks.

For many tribal people still living on their homelands “there is no closing the gap” stated Ms Kunoth-Monks.

When told of the limited progress in just two of the six Close the Gap targets Urapuntja resident, Ms Kunoth-Monks said her people do not “belong in there”.

“It is so far removed and it’s fragmented to hell, that us tribal people do not relate and nor do we belong in there. That’s how we feel,” she said.

Ms Kunoth-Monks said what was important to her people was Lore and Culture and so the educational attainment that mattered to them was being delivered right now by “the Red Ochre Men”.

“At the moment the Red Ochre Men are travelling through the country; they emptied Arlparra High School last Thursday of all boys that should be in ‘business’ camp and they made no apologies about it,” she said.

She made no bones about the boys leaving school for ‘business’ camp because she said it was “for Cultural obligations”.

For Ms Kunoth-Monks, the importance of the education of the boys by the Red Ochre Men really exposes the government’s Close The Gap for what it is: cheap words.

“Cheap words indeed. If you want the true factual standing of where the Aboriginal is at and we’re not really the Aboriginals we’re the First Nations Peoples, you come right now as the Red Ochre Men travel through this country and you feel it,” she said.

“You feel it and as they walk in they walk with authority and nobility; not the riffraff that is seen to be screaming and yelling and everybody to their own accord and their own wishes.”

Ms Kunoth-Monks said the real gap that needed to be closed was between tribal people, cultural people and the “so-called leaders” appointed by white governments.

“These people need to come home and sit at the feet of some of these Elders,” she said.

“We are not nor have ever been really interested in closing the gap as such. The essence of us is apart from the struggle that is going on and that’s all about closing the gap between the so-called leaders and us black people with Lore and order in the bush that seems to be lying dormant, but is not.”

The real danger for First Nations culture is the black people working for government, or trying to negotiate on government terms who are looking after “their own back pocket”, she said.

“Every year there is a resurrection, a real resurrection of the holistic person, the Black person through our ceremonies and that’s where we’re not touching base with the likes of Kirstie Parker, the likes of Marcia Langton, the likes even of beautiful people like Chris Sarra. They don’t belong to our tribal makeup.

“The essence of us is separate from our rights to demand assistance for our physical needs, not to assimilate us to such an extent that we lose contact with those that are there supposedly to help us.

“It’s not only the white system and the government policies, it’s also those that look after their back pocket,” she said.

Close The Gap targets like Year 12 Attainment are a little hard for Rosalie Kunoth-Monks to get excited about, to use the Close The Gap language – invested in – when she lives in a community that struggles for clean water, fresh food and the most basic of services the citizens of even our most outlying suburbs and country towns take for granted.

“The physical needs of an Australian citizen, so-called, we have a right to access what is going on for the rest of Australia but for God’s sake leave the essence of who we are to our ancient Lores,” she said.

Rosalie Kunoth-Monks does not want to see her people included in the white man’s constitution with its “white standards” when there is a much older, deeper constitution her people are already a part of.

“What we need to do is not look so much at apeing or copying white people and their standards. Our standards are etched in stone long before any white settlement here,” she said.

“Rather than the white people saying to us, white policies, we want to recognise you; for God’s sake grow up, grow up,” she said.

I am not the problem, nor are my people, the tribal people.”

This article was first published in The National Indigenous Times, Wednesday 18 February edition.