What a load of shit from the Lord Mayor of Perth 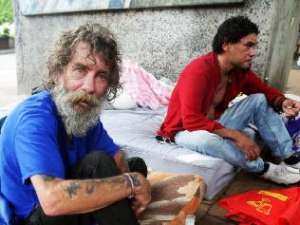 A Sunday newspaper has run a story that the Lord Mayor of Perth, Lisa Scaffidi is in possession “of strong anecdotal evidence” that “professional beggars were potentially earning hundreds of dollars a day.” The same old pernicious rigmarole that I’ve heard many times over in my travels around the world – that some beggars are not actually homeless and that instead they belong to “an organised cartel working together to profit from the generosity of workers and visitors to the CBD.”

What a load of hogwash.

I would like to remind that Fagin and his motley collection of beggars and pickpockets, the Artful Dodger included, were indeed very much so down and out – impoverished.

In August 2012, the Fremantle Council Mayor, Brad Pettit, shamed himself when his comments of moving on the “eyesore” of beggars from Fremantle’s commercial strips were broadcast on prime time television.

A sad indictment of our society is that these same people who want to move on our homeless carry on as if they are passionate about social justice and equality.

Below is my Letter to the Editor of the Fremantle Herald:

WHAT a load of shit the Fremantle council is! How dare it purport there have been numerous complaints arguing the most vulnerable—our homeless, “beggars”—should be moved on (Herald, August 4, 2012).

People rarely have the pomposity to complain about our homeless as if they’re some sort of eyesore.

That’s nearly 10 per cent of the total population homeless.

After I published my research the Broome Shire convened an emergency crisis meeting, more so to move on the “eyesore”—no different to what some blinkered Fremantle councillors are pushing for.

State governments have failed to do the spending to reduce homelessness. We need homeless friendly precincts in Perth city, Fremantle, Armadale, Midland and elsewhere there should be shower, laundries, storage, safe spaces, treatment centres, access to psychosocial counsellors, rostered physicians and nurses, and we need more transitional accommodation, and pathways to education and employment.

As a former long-time Fremantle resident, who still regularly comes through, I say leave the homeless in sight and shame to everyone who is pushing to move them on and deny them several dollars that give them some respite from harsh living and deprivation.

To the council I say it’s time you sack yourselves and bring on people more representative of humanity.

How pathetic to pick on the homeless. What wimps!

Link to the Fremantle Herald here.

The article (March 2, 2014) by The Sunday Times journalist, Peter Law, reported “WA Police said they had received complaints some beggars were becoming more aggressive towards people they approach for money.”

“The City of Perth can issue fines to beggars holding signs, while police can intervene if there is anti-social behaviour.”

“Council officers are investigating a new bylaw to give police and rangers more power to deal with beggars.

But the saddest comment yet is from Lord Mayor Scaffidi, “There is a suggestion there is a group of people making a living out of it, commuting into the city like every other worker does, for the purpose of begging.”

Mostly not true. I have worked closely with many of Perth’s homeless to help them in various ways and like anyone who works closely with our homeless we know the depths of their despair, of their impoverishment, of their burdensome living.

We know of the violations they are exposed to on the streets, in the parks, in the traps and squats.

Even if someone who is doing it tough is trying to make ends meet to pay the rent, to put food on the table for their family, comes out to the streets, into the public eye, to beg for some coins and dollars then so be it, what’s the big deal here? Someone is obviously doing it tough, and if they can be helped out so be it.

Mayor Scaffidi said, “They live in a home and they are using the collections from their begging to pay their way in life.”

“As harsh as it sounds, people walking past beggars have their heartstrings pulled thinking ‘there but for the grace of God could go anyone one of us’,” said Mayor Scaffidi.

“But the reality is that it’s easy to put 50 cents in the cap, and if that person is potentially a professional beggar you are helping them pay their rent.”

Once again, I say Good.

The reason people beg for money, is the same reason that the fictional Dickensian characters did so, because of their poverty – to survive.

Western Australia is the wealthiest jurisdiction in the world’s 12th largest economy. The average Western Australian wage is the highest in the world. Are our hearts so cold, and our compassion so blinded by ignorance, that we do not understand those who are our poorest?

I would like to see a couple of our homeless folk on Fremantle and Perth City councils – and enjoy some of the perks, privileges and honoraria that our pompous councillors do, while taking their narratives from street living into the consciousness of our council chambers and galleries and into the decision making.