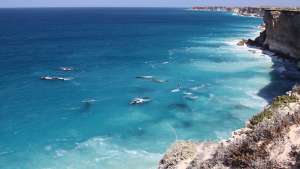 The Mirning peoples who lived the regions of the Great Australian Bight for tens of thousands of years, their spirit and their descendants will stand in the way of the oil giants. While the oil giants are after oil, the descendants of the Bight’s regions are still known as the whale people. They speak of pristine country and of the greatest nursery of whales on the planet.

One of the most famous children of the whale people is Mirning Elder Bunna Lawrie – the lead singer of Coloured Stone. Alongside other Mirning, he has taken the fight up against the oil giants.

The Mirning people’s struggle has been relentless despite the betrayal of expectations from their presumption of Native Title rights and despite the power and influence that comes with the billions of dollars of the multinationals. The Mirning have refused to accept they are powerless.

“I am a whale man of the Great Australian Bight. We cannot let the greatest nursery of whales on our planet destroyed. Once something is destroyed it cannot be returned.”

“I cannot allow BP to mine for oil in the Great Australian Bight.” BP has applied for four drilling sites.

The Mirning have secured the support of the environmental defenders, of the Wilderness Society, the Sea Shepherd and independent Senator Nick Xenophon.

Yesterday, The Age newspaper through their national affairs editor, Tony Wright, carried the story of the whale people’s fight to protect heritage and to protect the whale nursery – read here.

The BP application for four exploration drill wells next year will be decided on by the National Offshore Petroleum Safety and Environment Management Authority. It was not government instruments that protected the James Price whale breeding grounds from on and off shore mining but a relentless campaign by local Elders and community and complemented by the swell of supporters from around the nation – a cultural wave was too much for the proposed joint venture project to mine the James Price region (Walmadany) – and for a planned port which dredging would have impacted the breeding waters. The State Government had fought to the end for the mining development and the port to proceed even threatening compulsory acquisition of the land. But the multinational miners pulled out.

BP has set aside its infamy with the world’s biggest environmental disaster in the Gulf of Mexico – which took eleven lives and blew into the sea around 800 million litres of oil. BP reckons there is that much oil in the Bight that it will rival anywhere else in the world. But the Bight is deeper than other sites and more volatile – more than two and half kilometres deep and with waves half a dozen times the size of those in the Gulf of Mexico where BP was responsible for the world’s largest oil spill. The Australian Labor Party and the Australian Government are not saying a word, with revenue always the whole bit with these peddlers of the profit motive, whose limited visions are tied up to being able to pay for them. Australia has not been spared from environmental disasters such as that in the Gulf of Mexico – the 74 day Montara oil disaster took a huge toll off the Kimberley coast and will still be felt by the Timorese long into the future.

“My people have looked after the whales, the sea and the land for tens of thousands of years,” said Bunna Lawrie.

Mirning Elder Michael Laing believes the fight to save the nursery, heritage, history and the rights to land by his peoples will not be delivered by the Native Title Act or by government instruments.

“We have been betrayed by Native Title and by unscrupulous anthropologists, by lawyers and by governments.”

The Mirning describe the treachery borne of ruthless and illicit profit motives but which are tragically all too well known to most of us driving the practices and rulings of an in effect corrupted system of influence and judgments against what should be striving to the common good.

“We need cavalcades of support to do in the end what we know is right and oppose merciless excessive interest groups.”

The whale people at risk

People of the whales unhappy

Bunna Lawrie will not give up