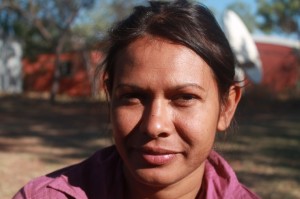 The remote eastern Kimberley town of Oombulgurri was slated for demolition by the Western Australian Government in November. But the demolition job may have started today. It has been reported by The Australian journalist Andrew Burrell that the demolition could be underway today,  “heading off a belated effort by Amnesty International and some Indigenous people to halt the works.”

Contractor McMahon Services has been hired by the Government “to demolish and bury more than 40 houses, sheds and other buildings at the abandoned Oombulgurri community, near Wyndham”. But the truth is that Oombulgurri was never abandoned. The State Government evicted the residents after closing down Government services.

Not long before its closure a brand new medical centre had been built. In the 2008-09 financial year the Federal Government had spent $4 million on infrastructure and upgrades. Most of the homes were in relatively good condition despite the worst of images misused to misrepresent Oombulgurri.

It has been suggested that the community was closed down because of high rates of domestic violence, child neglect and alcohol abuse. But it has been argued by residents that this has been overstated and is not the truth. The official line from the Minister for Aboriginal Affairs, Peter Collier had been that the community “is not viable.” Today, the Minister for Aboriginal Affairs, of a Government that in my view contextually does next-to-nothing for First Peoples considering the State’s incredible wealth has come out attacking those supporting the return of the residents to their homes. Minister Collier said that a 2008 coronial inquiry “found (Oombulgurri) was in a state of crisis” following a spate of  five deaths which included four suicides.

This is pretty rich coming from a Minister from a Government with one of the poorest investments in suicide prevention and mental health in the nation. Minister Collier, closing down a town is not how you address suicide. It is as if assimilation is the only language they know. A current high profile State parliamentarian once said to me, “This is the most racist State in the nation.”

Oombulgurri was once home to 300 residents, and it is said that more than 100 want to return to their homes. Oombulgurri’s residents did not want to leave when the State Government announced in 2011 it would be shut down. First the services were pulled out, and lastly the police station was closed.

Many of the residents finished up homeless on the outskirts of Wyndham, effectively dumped there by the Government.

I recently spoke to the Chairperson of the Balanggarra Aboriginal Corporation, Cissy Gore-Birch Gault, who said that more than 100 former residents would return to Oombulgurri. Ms Gore-Birch Gault said that the community was not the problem it was made out to be. Ms Gore-Birch Gault said that she is suspicious that the closing down of the Oombulgurri had more to do with mining and development agendas than it did with anti-social behaviour. This may or may not be the case but what you do not do is make people homeless. What you do not do is take someone’s town away, someone’s homes away.

Ms Gore-Birch Gault said that many of the people who were relocated to Wyndham had become depressed, some were still homeless, the majority wanted to return home. She also said that there had been two suicides of former residents in Wyndham in the last year. Once again, what is this Government doing about suicide prevention and quality of life – if it is about First Peoples, then it’s jack.

Amnesty International’s Tammy Solonec has said that the eviction of the residents let alone the demolition was likely to have been illegal and in breach of any number of international covenants and protocols. But since when has this stopped Australian Governments. It was not that long ago that the Federal Government suspended the legislative natural rights of the First Peoples of the Northern Territory in order to march in a military operation – the ‘Emergency Response’ – and effectively create a custodial circumstance of only the First Peoples of the Territory. That was an act of racism that the future will indict this generation for, but what of it, the damage will have been done, many going to their graves burned by the injustices.

Not only does this Government have a bent for demolishing the communities of the First Peoples but it has a bent for sneaking in the demolition teams unannounced, before the publicly scheduled dates. This is totalitarianism. On March 18, in one of the more disgraceful actions by this Government, demolition teams were sent to Perth’s Swan Valley Nyungah Community to demolish the eleven rammed earth homes and all the other dwellings, razing them to the ground. The former residents were evicted eleven years ago, many becoming chronically homeless, some dying on the streets.

Western Australia has the highest homeless rates in the nation, the highest suicide rates in the nation. Its narrative around First Peoples is the nation’s most disgraceful, challenged only by the Northern Territory. Western Australia is the wealthiest State in one of the world’s wealthiest nations. The Kimberley has a homeless rate of nearly seven per cent, just about all of it comprising First Peoples. The Government upped the homeless numbers when it closed down Oombulgurri, and upped the suicides.

It is not my place to just forever report a story, it is also my right to state what I feel and think, and I feel and think that this Government stinks. As Elder Richard Wilkes said, “Racism burns in this nation, it burns the First Peoples of this continent. We now have Governments elected that have catapulted us into dark times.” This Government just plainly disgusts me, even more so than so many Governments before them, Federal and State that have betrayed the people again and again. Australia has a long way to go before it sheds its racist veils and layers.

Anyone who reckons Australia is not racist has not seen the Australia I have seen.

Our brightest and most noble people are not in our parliaments – State, Territory or Federal.

Cissy Gore-Birch Gault says mining could be the real agenda

“We want to go home”