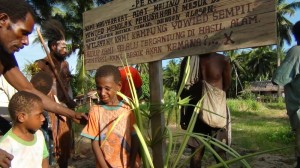 The community in Yowid stating their opposition to PT Mayora and PT Astra – Photo, AwasMIFEE

One of Indonesia’s largest consumer goods companies, PT Mayora, has been named by traditional Indigenous leaders from West Papua who say they were forced to sign away their lands under threat of being branded as “OPM/separatists” by the Indonesian police.

Ambrosius Laku Kaize, Adat (Customary Chief) of the village of Kampung Yowid, Tubang District, Merauke, Papua, said in a statement from the Marind intellectual group known as Formasi Ssumawoma, that he was forced to sign a document placed in front of him by PT Mayora’s staff. “I was forced to sign, because the villagers of Kampung Yowid had been accused of being OPM members”, he said.

According to Ssumawoma, the company began to turn the screws after villagers from Yowid–as well as Woboyu, Bibikem, Dadalim, Wambi, Wanam, Wamal and Dokib–exercised customary law by erecting markers on their land to prohibit the presence of PT Mayora and PT Astra. During the action, the villagers also put up signs with various messages including “Oppose the companies, because we don’t have much land, and because we want to defend the Marind culture and our children and grandchildren’s future”.

Following this, employees at PT Mayora somehow managed to get a hold of a leaflet that was put together by the Merauke branch of the West Papua National Committee (KNPB) to inform people about the human rights situation in Papua. Ssumawoma says it was nothing more than “a summary of news from the mass media.” However, once the leaflet was in PT Mayora’s hands, it became something else entirely.

As Adat Kaize notes in the following video testimony, PT Mayora started claiming that the villagers were OPM separatists, an accusation that comes with a heavy cost for the accused: They become potential military targets. “Before I signed, they were trying to force me, using political arguments, saying we wanted independence. I felt it would be terrible if the whole community had to run to the forest, and I wanted to try to take steps to prevent that. That’s what forced me to sign – so the people would be safe,” said Adat Kaize.

The administrative village head and the head of the Geb-Zami clan were similarly intimidated.

Concerning PT Mayora’s presence in the region, Ssumawoma comments that some villagers who support the company are also being used to terrorize others into letting PT Mayora stay; However, “[Our] monitoring has revealed that Marind people in the affected villages (Yowid, Dokib, Wamal, Dodalim, Woboyu, Bibikem, Wanam and Uliuli) have not received reliable and truthful information about any policy for investment on their ancestral lands in general, and about PT Mayora’s presence in particular. This is an indication that the investment process is… violating the Marind indigenous people’s right to receive information without compulsion and before investment activities commence.

“Aside from that, Marind people from the Woyu Maklew sub-ethnic group have already made clear that they oppose all investment on their ancestral land, because they do not have the skills required to get work with companies. PT Mayora has already brought insecurity into the lives of local people, by going around villages in the area escorted by fully-armed Brimob from Merauke Police Station, and now by inciting individuals from the villages. The company has… created an unsafe situation by sowing fear.”

Refusing to simply give in to PT Mayora–a company that exports to 50 countries worldwide, including Canada and the United States–on Jul. 27, 2013, the villagers of Kampung Yowid wrote a letter to the Merauke Regency leader, Papuan Provincial Investment Board and Indonesian National Land Agency explaining that they continues to oppose PT Mayora.

Taking things even further, today (Aug. 12, 2013), approximately 100 people from SSUMAWOMA along with youth and community members from several villages occupied the offices of PT Mayora and PT Astra on Jalan Ternate, Merauke City. As reported by West Papua Media, the ongoing action is aimed at getting both PT Mayora and PT Astra to stop their operations and drop their investment plans.