“Well, I remember the two of us raising such matters at the State Director’s Meetings way back” 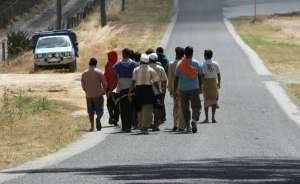 That was a line from an email I received from a mate of mine yesterday. What did it refer to? It referred to the raids that had been conducted on the businesses in Carabooda, a northern suburb of Perth. Details of those raids were made known to us as we woke up from our slumber on Saturday morning May 3rd 2014. Details are here:

“Way back,” that Graham referred to in the statement above, was around 2007/2008. Both of us were on a Client Reference Group for the Department of Immigration, Multicultural and Indigenous Affairs (as it then was). “Such matters” as he refers to were the potential for exploitation of employees by unscrupulous employers, through both the 457 Visa and the Student Visa category. Graham also went on to say the following in his email:

Really no different to the surprisingly large number of mainly young Asian “Students” working in Prostitution in WA alone. Education Providers have taken their Enrolment Fees happily and, after most don’t turn up to Class, Immigration requires that the Providers formally notify it of Breach of Visa Conditions, so the “Student” can be contacted and most often given 14 Days max to leave Australia or be arrested and detained.
My usually reliable info on both exploitations is that Immigration simply does not have the resources to pursue any but the most obvious and serious cases, many involving State and Federal Police, as indeed was the Carabooda Case.

One of the things that I have consistently argued for with governments of various persuasions is for a “mentoring” system. In other words, every person coming into the country would be allocated a Mentor. Each Mentor would be able to have up to 10 or 15 mentees. So someone like me who is well connected with the culturally and linguistically diverse (CaLD) communities and the government agencies and service providers would be able to take on a number of mentees who I would be “responsible” for. My responsibility would be limited to advice and assistance to enable the proper integration of these people into the Australian community.

My time in the role of mentor would be compensated by the department to a level commensurate with a Newstart or Aged pension hourly amount for the time actually spent doing the work. This would supplement the income of the recipient. Investment by the department in this type of program will minimise the later payments that would be made by them to control and eradicate these unfair exploitative practices.

It has long been my belief that if I had been the Mentor to Jagdeep Singh back in 2010, we would have avoided the deaths of Navdeep Singh Dhaliwal (20) and Kawaldeep Singh Dhaliwal (19. Details of those deaths are here: For those who remember the case it involved the requested return of $300 bond money that had been paid by Jagdeep as part of a rental agreement. When the brothers, Navdeep and Kawaldeep refused the repayment he went back to his house and returned with a carving knife with which he killed the two boys. Had he been able to pick up the phone to his mentor and simply say “Uncle, I can’t get back my bond money, what can I do?” we might have been able to save the two brothers and prevent the 20 year sentence that has been dealt out to Jagdeep who now languishes in Hakea prison.

It is high time that the Immigration department revisited this issue and look at the allocation of a mentor to people coming here on a 457 Visa and/or a Student visa. This payment will eliminate the spending of colossal amounts of money in trying to rectify issues such as have occurred in the case at Carabooda.

The other issue that this event at Carabooda raises is the treatment of the exploited workers by Immigration and other agencies. As I understand, these poor exploited workers have been taken to Yongah Hill detention Centre at Northam. My comments in respect of this have been as follows:

He expressed concern that all 120 people were being detained and deported without having the opportunity to stay legally despite allegations they were exploited and virtually treated like slaves by criminals.

Yongah Hill was established to house those people coming here WITHOUT a valid visa. All of these people have come here with a valid visa. In some cases the visa has expired but the entry into this country was with a valid visa. So why are we shifting these poor exploited people into another detention facility? Have they not endured enough through the exploitation over the last many years? The next logical progression is for deportation in the next few weeks.

For some understanding of the issues that have been imposed on these people see this report:

The men, women and children, found on a compound in Carabooda owned by TLF Exports, were allegedly living in squalid conditions, with several cramped into each room.

Acting Det-Supt Chris Adams said authorities were seeing evidence of the appalling working and living conditions being forced on people who were trying to make better lives for themselves.

“This police investigation will proactively target businesses who are exploiting illegal workers and who are linked to this organised crime syndicate,” he said.

City of Wanneroo health inspectors raided the same property in 2009 after concerns about a sewerage system running from a shed that housed overseas workers.

It is clear that these conditions were squalid. The extent of the squalor will no doubt be made public over the next few days as information becomes public. I have drawn parallels between the treatment of these employees and that of the “Gasterbeiter” or “Guest worker” in East Germany post the Second World War. Some of the conditions that these people were subjected to were as follows:

Residency was typically limited to only 3 years. The conditions East German Gastarbeiter had to live in were much harsher than the living-conditions of the Gastarbeiter in Western Germany. They had to live in single-sex dormitories. In addition, contact between guest-workers and East German citizens was extremely limited; guest-workers were usually restricted to their dormitory or an area of the city which Germans were not allowed to enter. Sexual relations with a German led to deportation. Female Vertragsarbeiter were not allowed to become pregnant during their stay. If they did, they were forced to have an abortion.

It must be emphasised that the conditions that the guest workers were subjected to in West and East Germany were sanctioned by the authorities. In this case here it has been allegedly the domain of exploitative and unscrupulous employers.

But we hope and trust that this series of raids are a very strong signal to the community that this type of exploitation is not acceptable. And it provides a very strong indicator that the department will prosecute these matters where they are made aware of them.