We are about to stop jailing fine defaulters – to the critics, do not naively criticise this away 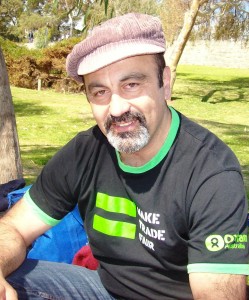 “It is my experience that in general people leave prison worse than when they went in,” Gerry Georgatos

Prison is a heartbreaking experience – a damaging one. In general it is my view that people come out of prison worse than what they went in. Wherever possible I would support any policy that ensures other options to jailing people. One quarter of the Western Australian prison population is comprised of poverty related fine defaulters. The prison experience ruins lives.

I was disturbed by the ill-informed comments of a couple of well-meaning grassroots activists who criticised an alternative option to the jailing of fine defaulters. I have spent the last six months positively lobbying the Federal Government to roll-out the Custody Notification Service to Western Australia – preferably nationally. This is progressing. Alongside this lobbying, I have pressed the Federal Government to urge the Western Australian Government to stop jailing poverty related fine defaulters. We must stop turning the poor into criminals.

Last week, I was shocked by media stories where a grassroots activist criticised an alternative to jailing fine defaulters. The option would secure the debt would be repaid, and would ensure that there was no fine defaulting and more importantly as a result of this virtue no fine defaulter would be presented before the criminal justice system.

The Federal and WA Governments are now looking at alternatives because of my relentless six months of campaigning and in-person lobbying of Ministers. We must understand the management systems at hand – our parliaments. If I had my way I would quash all fine default related convictions, I would provide an amnesty to more than 1,300 Western Australian inmates. With the majority of fine defaulters I would wipe their debts and give them the helping hand they may need. But that is not the society we live in. There is no way we would get majority support for this from our decision-makers. So we have to get what we can. Far too many of our decision-makers reckon that if we don’t punish fine defaulters then they will continue doing as they do. I am not about tying punitive measures to such breaches but the majority of society is and does.

In light of what I know of the prison experience and of the psychosocial and societal impacts, my aim is to reduce the prison population, my aim is to keep people out of jail. These must be our leading premises.

Years go by and we blow away change – and ruin people’s lives – because we reach for too much. I remind some of my fellow campaigners that when they naively criticise something that is not ideal but still delivers the major premise they are playing with fire, they are dicing with people’s lives.

The media ran a response story with a grassroots activist on Senator Nigel Scullion’s alternative to jailing fine defaulters in Western Australia. Senator Scullion is urging Western Australia to implement the capped garnishing of wages or welfare payments as an alternative. Of course this option is preferable to jail. Of course it is, so to my well-meaning activist friends, do not play with human life. There is little chance of the Western Australian Government, bent with a mindset of punitive controls, that they will accede to much else.

I remind of my earlier statement that it is my experience that in general people come out of prison worse than when they went in.

We must do everything possible – anything – to keep people out of prison. Prison is a bastion of trauma, damage, a warehouse of illness and breakdown. Psychosocially prison damages people – there is trauma, situational trauma, multiple trauma, clinical breakdowns, depressions, displaced anger, tumults of despair and irreparable harm.

In an online news story an activist criticised the garnishing of wages or welfare payments – capped at 14 per cent – as akin to “taking the food out of children’s mouths”. This type of ill-informed and muddled-minded commentary is dangerous and puts at risk the prospect of protecting people from a prison sentence.

Contrary to the activist’s ill-informed claims that capped deductions will “take food out of the mouths of babies” we must be honest and realise that when a parent is in jail is when they are prevented from putting food on the table. When a parent is in jail, there is no income contribution to the household. Their wages stop, for those on welfare payments the payments stop. Furthermore, the jailed parent is not there for the children period. When a parent does come home from the prison experience what traumas do they bring back with them? So what are we criticising and at whose expense?

Some argue that community work orders are preferable options to deductions. We can support work orders but the State Government will not support this, so then do not criticise away the other option which will deliver the major premise – keeping people out of jail.

The assumption that community work orders are the best option is a good one but not panacea because if there is a breach of the work order then they will finish up before the Court. But the ‘compulsory’ deduction will ensure that no-one comes before a Court.

I learned of the death of Ms Dhu on the day of her passing. Her death was a needless tragedy. As a deaths in custody researcher her ‘case’ was one of the worst ever I have come across. I have studied more than 100 deaths in custody. As a researcher in racism, and someone who lifelong has lived the impacts of racism, the mistreatment of Ms Dhu resonated and emphasized systemic risk factors. Few will ever know how much work I have put in behind the scenes, how many organisations and how many individuals I have met with to exact change, to make sure we reduce the risk factors and increase the protective factors so that another death in custody like that of Ms Dhu’s never occurs again.

Soon after Ms Dhu’s passing, I travelled to Canberra and met with the Federal Minister for Indigenous Affairs, Nigel Scullion and urged him to roll-out the Custody Notification Service in Western Australia, which I believe would have saved Ms Dhu’s life. I lobbied Senator Scullion for him to lead the way with the WA mob to end the jailing of poverty related fine defaulters. I have spent months on all this and lobbied other parliamentarians too.

Unlike the majority of our social commentators, I visit prisons, I have mustered with prisoners, I know what the inside of a prison looks like, feels like, I work with people post prison release. I am also a suicide prevention researcher and I understand the effects of the prison experience on people. I understand that we must do everything we can to keep people out of prison.

We must understand our society, we must not be naïve and we cannot put at risk good outcomes for wishful thinking. We must reduce unnecessary punitive measures where we can.

It is naive and preposterously dangerous for anyone to dismiss the solution of garnished income. It is the only viable solution that can be pulled off with the pivotal majority support of our parliamentary decision-makers. To suggest that garnishing wages to pay debt is ‘income management’ or ‘quarantining’ is scaremongering nonsense. It is about repaying a debt in order to keep people out of jail when no other options are within reach of being achieved at this time. Ms Dhu’s mother, Della Roe, said to me she supports this measure. Ms Roe said had this been in place last August her daughter would be alive today.

I can only restate that to suggest that the 14 per cent capped deduction will starve a family is ludicrous. When someone goes to jail, their income stops altogether, and their parental responsibilities are lost altogether. To suggest that community work orders alone are a better option, well that is at the magistrate’s discretion, but the individual could be consigned for quite a long time to a community work order – taking them away from family and other prospects.

We must achieve what we can when we can.

In general, for many Australians debt is a treacherously stress riddled issue. Debt destroys lives, destroys relationships, destroys families, leads to insolvency/bankruptcy. Debt has to do with the DNA of our societies, so if you want the idealistic changes that my activist mates call for we’d have to change the DNA of our societies. The owing of money is viciously pursued; in real terms the tragedy is that money has more value than human life – there are more laws in place to chase down debt than there are laws in place to protect people from being smashed psychosocially.

The other day, Premier Colin Barnett, someone who I have relentlessly criticised on so many fronts, said that he supports Senator Scullion’s alternative option to jailing people. We must not miss this opportunity. To my critics, I say to them, it is not you shuffled off to jail and I say to you, it would be ‘criminal’ to keep sending people to jail for something like fine defaults that some of us have worked tirelessly to change.

Please, remember the major premise – the keeping people out of jail.