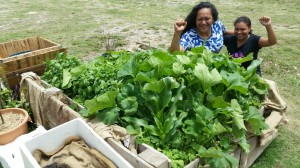 Tepora and Evie with one of the vegetable gardens at Redfern Aboriginal Tent Embassy – Power to the people.

With the end of the year fast approaching it is now seven months that Redfern Aboriginal Tent Embassy has stood solid and surprised many in that it has held off the Aboriginal Housing Company from commercially developing The Block. Like Walmandany Tent Embassy which stood solid for two and half years north of Broome in facing off the James Price Gas Hub proposal, so too has the Redfern Embassy inspired many First Peoples all over our vast continent.

A neat tent city has come of age at The Block – and to get through the summer they have built vegetable gardens.

“We are here for as long as it takes to protect The Block from the commercial only aspirations of the Aboriginal Housing Company,” said Embassy stalwart Tepora Stephens.

“We’ve built some vegetable gardens, and there’ll be more, because we are here to stay.”

“This is Aboriginal land.”

“During the winter we had kind donations of firewood and anything else we needed and now we’ve got the gardens in place,” said Ms Stephens.

The Stringer was at The Block on the morning of May 26, when the first tent was pitched by powerhouse social justice advocate, Wiradjuri woman, Jenny Munro.

“We reclaimed The Block for our people,” said Ms Munro. The Block is viewed as prime real estate by the Aboriginal Housing Company but its former residents see it as a home that was stolen from them. 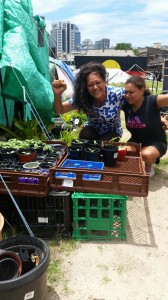 The Block was once home to scores of families of First Peoples. Redfern and the surrounding suburbs were home to thousands of First People. The Block was all about low-income housing but that was blown away by the Housing Company. The Block had been considered a spiritual hub of the Aboriginal rights struggle, and was one of the cauldrons from where the struggle for justice and for the elimination of inequalities were historically chased down.

In 1965, Charles Perkins organised the Freedom Ride with Sydney university students and this event played a huge role in burning bright the flame that had been flickering among political activists from The Block to La Perouse and around Australia. The Freedom Ride also brought on some positive media interest and an era of enlightenment and heightened protests. The Block would feature as one of the signature piece hubs of the protest movement.

More than forty years ago, a young Bob Bellear, a future judge, Australia’s first Aboriginal judge, led a campaign to prevent landlords in and around The Block from evicting Aboriginal residents. He then lobbied the Gough Whitlam Government to purchase houses in The Block, and establish the Aboriginal Housing Association for low cost housing for Aboriginal families.  But less than 30 years after the establishment of the Association, the Association had been taken over by a new board and management, led by Mick Mundine, becoming the Aboriginal Housing Company, and then soon began the decade long eviction of the families – but by ones own.

Ms Munro said, “The plan for this land was always to provide affordable housing for Aboriginals. It was designed to be for low-income housing. The AHC’s current plans have no benefit to the Aboriginal community whatsoever.”

Nearly seven months later the Wiradjuri social justice warrior is still there, having staved off the bulldozers that were scheduled for July, around NAIDOC Week, by the Aboriginal Housing Company. On May 26, as Ms Munro and a few others were pitching the first tent, Mr Mundine came down to The Block and a feisty exchange took place between the two, one that has reverberated through First People networks right throughout this continent.

Mr Mundine said, “It is not. It is private land.”

Mr Mundine said, “It is private land. It is not Aboriginal land.”

The late Bob Bellear’s wife, Kaye Bellear said, “Bob would be absolutely devastated if he was alive to see what the Aboriginal Housing Company is doing to this land.”

But thanks to Ms Munro, the many supporters who have been staying at the Embassy, the hundreds of supporters who have come to the rallies and who have committed their readiness to muscle up at blockades, and to the many people from all over the nation and from around the world that have visited the Embassy, the spirit of the late Mr Bellear may well be smiling. It still remains Aboriginal land – and with vegetable gardens and much more to come.

Audio excerpt of May 26, 2014 confrontation between Mick Mundine and Jenny Munro here: