Perth’s historical Clontarf has just been put into exclusive Aboriginal ownership following a $26 million gift from the Christian Brothers. For the deal to go through the Vatican’s Papacy had to seal it all with their approval, which they gave. 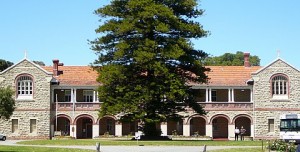 The day to day running of the College, including the hiring of staff and enrollment of students, is the responsibility of the College Principal.

After the decade’s worth of negotiations the Perth site was handed to the Indigenous Land Corporation (ILC). Clontarf was originally a boys’ orphanage opened in 1901 before becoming a school of more than 120 Aboriginal students from years 7 to 12.

ILC chairperson Dawn Casey said both the Christian Brothers and the Clontarf management ensured “a smooth transfer of ownership.”

Dr Casey said the ILC would continue to support the Aboriginal based organisations at Clontarf.

“It is a symbolic and practical demonstration of reconciliation,” said Ms Macklin.

“Clontarf is a culturally significant and iconic property for Indigenous people in Western Australia and will now be secured for future generations.”

The Stringer has visited Clontarf on a number of occasions. The College was originally known as St Joseph’s Boys’ Orphanage. It would later be known as Clontarf Boys’ Town and would have a farm on site. The boys worked on the farm and were also engaged in assisting with much of the building work.

During World War Two Clontarf was occupied by the Royal Australian Air Force but after the war Clontarf resumed as a boys’ orphanage.

In 1961 Clontarf was also extended as a general school and the numbers rose to 300 but the school was closed in 1964.

The Clontarf  Aboriginal College was opened in 1986. In January 200, the Clontarf Football Academy was established to provide a high level of coaching for Clontarf College boys. Soon after, a Girls Academy for netball and basketball followed.