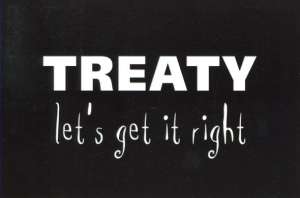 The majority said Treaty is the only way to achieve “real equality” and “real justice.” They believe that through Treaty they will be protected from the non-Aboriginal carpetbaggers who are drowning them out of any significant role with the debacle that is now Native Title, who have destroyed the original intentions of Native Title. The majority believe Treaty can be the most important step to recognising the full suite of rights of Aboriginal and Torres Strait Islander peoples that the Black Power and Sovereignty movements of decades past strived for. The majority believe that a Treaty will go the longest way to eliminating the third-world akin conditions that more than 75,000 Aboriginal people are living within, to reducing the world record high incarceration rates, to ending the abject dejection and despair that many people are trapped in – the sheer hopelessness.

A second survey conducted before and after one of the screenings of John Pilger’s documentary of UTOPIA, asked 100 of the attendees whether they were in support of a Treaty. More than 80 per cent said “yes”. In the last several days a Facebook page has been set up calling for Treaty, and it has generated 1,000 supporters in those few days alone.

Chair of South Australia’s Narrunga peoples, Tauto Sansbury has long championed the challenge for a Treaty, whether it is by each Aboriginal nation or whether a collective one. Mr Sansbury said that Australia is shamed by the obvious racism that it is the only “developed nation to not have a Treaty with its Indigenous peoples.”

“The only way forward, and the only right thing to do, for all our peoples across Australia, is Treaty. Of the so-called developed nations only Australia is without Treaty. Our peoples want Treaty, however we have to rise in greater numbers to ensure we achieve it,” said Mr Sansbury.

Chair of the Yolgnu Nations Assembly, Dr Djinyini Gondarra believes Treaty can be the “great liberator” for all people.

“I want to see my people celebrate their true dignity as the First Nations People of this continent.”

“I want to see my people live in Arnhem, that they can live with their language and with their culture. My people should not be moved on.”

Dr Gondarra said that Australia Day and Survival Day translate to two sets of opposing cultures and laws however Treaty can end this division and the inequality Aboriginal people face, and then arise in a day “everyone can celebrate.”

1988 marked the bi-centenary of the British invasion of “Terra Nullius” and it was in this year that Prime Minister Bob Hawke attended the Barunga Festival, just south of Katherine. There, the Northern and Central Land Councils chairpersons, Galarrwuy Yunupingu and Wenten Rubuntja presented Prime Minister Hawke the Barunga Statement. The Statement petitioned the Government to recognise land rights and to formalise a Treaty with them. The Barunga Statement was modelled on the 1963 Yirrkala Petition which a previous generation of Yolngu leaders delivered to the House of Representatives.

Prime Minister Hawke vowed that his Government would enter into a Treaty with Aboriginal peoples Australia wide by 1990.

However, this would become a Prime Ministerial promise that would be broken. In response, Yothu Yindi composed “Treaty” to protest the hurtful broken promise. In 1992, the song climbed the Australian charts and became famous around the world.

“Well, I heard it on the radio, And I saw it on the television, back in 1988, all those talking politicians.”

“Words are easy, words are cheap. Much cheaper than our priceless land. But promises can disappear, just like writing in the sand.”

The raise of expectations with Prime Minister Hawke’s promise was met by a subsequent betrayal. But the call for Treaty is still in the souls of many and is seen as the only way to righting some of the many wrongs.

“This song was written after Bob Hawke, in his famous response to the Barunga Statement, said there would be a Treaty between Indigenous Australians and the Australian Government by 1990,” once said the late Dr Yunupingu.

South Australian Kaurna Elder, Lynette Crocker said that Treaty is not just possible but “a must-do”.

“We can bring on Treaty, it goes to the heart and soul of our people. We cannot settle for anything less,” said Ms Crocker.

Ms Crocker said the opportunity for the call for Treaty is being pushed by many influential peoples. Ms Crocker has spent a lifetime pursing a Treaty for her peoples even having confronted Prime Minister Julia Gillard during one of South Australia’s annual Proclamation Day events. On that December 28 day, 2009 acting Prime Minister Gillard responded, “There will be no Treaty – there will be no bits of paper.”

Ms Crocker said she had been shocked by the response and surprised “by the manner of her response.”

“There were 300 people there on that day, and us Aboriginal peoples present were shocked that a Prime Minister would consider a Treaty or a Bill of Rights as ‘just paper’, that Aboriginal rights do not amount to much more than that, not even worth bits of paper.”

“But we are worth the ink and we will get our Bill of Rights because till this happens then we cannot move forward in the ways we must.”

The call for Treaty has been reinforced by John Pilger’s popular documentary, UTOPIA, where he closes the morose look into Australia’s historical and contemporary secrets with a call for Treaty – and he suggests that anything less is no solution for the myriad ills and inequalities Aboriginal and Torres Strait Islander peoples still endure.

“Unlike the USA, Canada and New Zealand, no Treaty was ever negotiated between the lawful owners of Australia and those who took their land,” said Mr Pilger.

“International law is clear (that) there has to be Treaty.”

“If the Australian political establishment believes it can continue to look the other way and deny the First Australians their basic rights they are seriously mistaken.”

In Western Australia, with the nation’s highest incarceration rates of Aboriginal males, indeed the world’s worst jailing statistic of Aboriginal peoples, it was less than a couple of years ago that the Aboriginal Legal Services CEO Dennis Eggington said, “(Treaty), that’s the way other countries have done it, and I don’t know why Australia procrastinates any longer.”

The call for Treaty was espoused similarly so by the majority of people we surveyed from around Australia. “Treaty, it will take away some of the pain, it will fix many things, it will save lives, it will help everyone,” Barker Ryder, Katherine, Northern Territory.

“We descendants of the original inhabitants of Aboriginal Australia are entitled to demand Treaty. Yothu Yindi sang about Treaty, let us make it a reality,” Coralie Cassady, Townsville, Queensland.

Treaty, let us get it right – Tauto Sansbury