Traditional healers – ngangkari – in an Australia-first 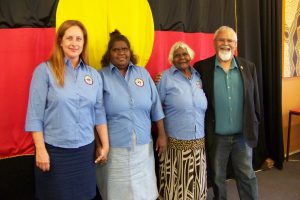 Dr Panzironi with Anangu Elders and Ngangkari, and Tauto Sansbury

In an Australia-first, traditional Aboriginal healers from central Australia have coalesced to form a corporate body to coordinate the provision of their health care services. Recently in Adelaide the new body – Anangu Ngangkari Tjutaku Aboriginal Corporation -launched the ‘Hand-in-Hand report on Aboriginal Traditional Medicine’.

Author of the report, Dr Francesca Panzironi said the publication and the formation of the Anangu Ngangkari Tjutaku Aboriginal Corporation are the outcomes of a four-year research project on Aboriginal Traditional Medicine. Dr Panzironi worked alongside a number of ngagkari (traditional healers) to produce the report and in developing Indigenous health policy in South Australia approved by the Aboriginal Health Research Ethics Committee of the Aboriginal Health Council of South Australia.

“The Hand-in-Hand report proposes a new statewide policy framework grounded on the extensive, evidence-based enquiry on the status of Aboriginal traditional medicine within the international, national and South Australian context,” said Dr Panzironi.

The core component of the proposed statewide policy framework was the establishment of the Anangu Ngangkari Tjutaku Aboriginal Corporation (ANTAC).

“The Anangu Ngangkari Tjutaku Aboriginal Corporation is the first organisation of Aboriginal traditional healers in Australia, founded on the principle of self-determination. The ngangkari from the Anangu Pitjantjatjara Yankunytjatjara Lands gathered in several meetings over the last two years and made the decision to establish their own Aboriginal corporation to coordinate the provision of their health care services and create a sustainable employment pathway for accredited ngangkari,” said Dr Panzironi.

“Francesca spent the past four years of her life undertaking this project with the aim of getting nangkari recognised as healers, and for them to be accredited and paid properly for their services,” said Mr Sansbury.

“Francesca has not received any funding from government sources or Aboriginal organisations to undertake this work. One of our universities provided some funding for the first year but apart from that Francesca covered all her expenses, from beginning to end. She gave up her job as a university lecturer to undertake the project.”

“We first met while I was the CEO at Ceduna Koonibba Aboriginal Health Services. She has been undertaking this important work ever since.”