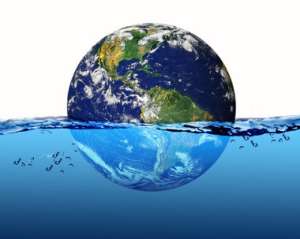 He said if Australia and societies around the world do nothing to stop the sea level rise now confronting many Torres Strait islands it was entirely possible the islands could disappear beneath the waves or become uninhabitable.

“If that happens then the people of the Torres Strait Islands would become refugees because we would have lost our land and that is a terrible cost,” he said.

“Loss of our culture is directly related to our land and also to our sea environments there. They go hand-in-hand.”

“We’ve had during certain times of the year king tides and those storm surges. It’s affected our infrastructure on the islands and our sacred sites. The places where we manage the water and the sewerage have been affected as well as the houses close to the shoreline,” Mr Webb said.

Mr Webb said the continual denial of climate change by sceptics meant little to the people of the Torres Strait Islands because the communities were having to cope with the effects which had now become a daily reality of their lives.

“They have noticed the difference, with erosion particularly and sea level rise.”

Mr Webb said while the effects were already being felt the growing concern among the communities was the situation would get a lot worse if nothing is done.

“Sea level rise is going to really impact our people up there and with climate change the effect up there is going to be the rise in the sea level,” he said. “Some of the islands are quite low-lying. We have alluvial sediment islands in the top western area that are all basically mud, in the central area we have coral atolls that are very low lying. These islands have an elevation of only a metre or two.”

“There really isn’t any time left to buggerise around. We really need to start thinking about, and start planning for, the future. What are we going to do, how are we going to adapt and be resilient as these changes continue to happen to us?”

Some of the negative effects on the islands have been due to poor planning of the recent past and Mr Webb said future action must look further back to sustainable traditional practices.

“The negative effects are due to also the extra, added pressure of how infrastructure has been designed and developed on our communities with regard to the roads and improper drainage systems adding to extra pressure on erosion,” he said. “The old people also say we need to remember and put into practice some of our cultural practices in the way that we live, based around renewables, using the resources we have there in the community and things like that.”

“We don’t have to look too far for some of the solutions because it is in, and a part of our culture and how we adapt to this,” Mr Webb said.

The Western solutions imposed on the islanders over years have been unsustainable and damaging but Mr Webb said the islands have abundant natural and renewable sources of energy like the sun and wave energy.

“Just the way we’re set up is not very self-sufficient and it’s very reliant, like our energy sources are derived from diesel which has to be shipped up, transported to the Torres Strait and then that’s used to provide electricity and things like that when we could be moving towards those more sustainable, renewable energy sources,” Mr Webb said.

“We can harness the tidal energy we have there, the wave energy and things like that; the sun.”

If the Torres Strait Islanders do become climate change refugees, Mr Webb said there was talk the communities would have to relocate to Bamaga or Seisia on the Cape York peninsula.

“There has been talk, maybe, of our people who are going to be severely affected by climate change moving over to that area in the northern peninsula area, Bamaga, Seisia area and things like that but that’s something we really need to continue that conversation and really plan for that,” he said.

Torres Webb spent last weekend at a youth climate summit in Melbourne with young people from “all over the country and between the ages of 15 to 30,” where he hoped to see real action emerge rather than just more words about action.

“That’s exactly what I don’t want to see happen. I’d like to see some type of plan where we can start and work with the younger generation because that’s where we’re going to see change moving forward,” he said.

“I’m really looking forward just to hear some of the other ideas and suggestions from other people and other youth who are out there in Australia and work together and see what we can come up with; ideas and strategies to just keep on moving forward with this plight,” he said.

“I work for Education Queensland. I want to see how we can add this type of information about climate change as part of the curriculum and work towards having, maybe, school gardens and other small, practical, tangible things that we can achieve.”

The summit is the brainchild of a group of young First Peoples who have created an organisation called Seed. The organisation was formed because they have become increasingly concerned with the lack of action by government on climate change.

The conference in Melbourne last weekend was used to learn skills from some of the leading, best, climate and Indigenous campaigners and to plant the first seeds of our movement.

One of the organisers, Millie Telford said Aboriginal and Torres Strait Islander peoples have looked after this land sustainably for tens of thousands of years, and this gives us hope that we can do it again. This is why Indigenous communities need to be front and centre of our efforts to solve the climate change.

This article was first published in The National Indigenous Times