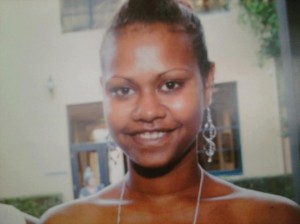 The family of Philinka Powdrill have given permission for Philinka’s image to be used.

My colleague Gerry Georgatos is among Australia’s leading authorities on Indigenous youth suicide. He told me of the last 13 youth suicides in Western Australia; 12 were doing well at school, many were employed and showed none of the signs you would associate to someone wanting to end their life.

One of these children was 18 year old daughter, Philinka Powdrill. Philinka was buried last weekend in her Kimberley hometown of Fitzroy Crossing having just graduated from a Melbourne boarding school.

I say children because each of these young people were somebody’s child, a son, a daughter, a grandchild. The loss of your child is something no parent should ever have to suffer and what is happening in Australia should shame the very heart of Australia’s conservative politics and yet government remains unrelenting in their attack on our Culture and our People.

They ignore the reality and continue to drive policy on opinion from those who continue to alienate our children. It has to stop.

The Northern Territory Australian of the year, Rosalie Kunoth-Monks absolutely rejects the ongoing policies of this government. She says: “Stop the assault, the government is in violation of human rights. We demand that they stop the dictatorship and assault on First Australians. I want an absolute halt to the punitive assault of our people.

“We have to rise above what is happening. I will not be dictated to by anyone. I speak from the degree of my Traditional Homelands. That is who I am and who I represent and I now find myself speaking as a Black woman fighting for survival.

“I will not be whitewashed in my thinking. Once again I state that we are not the problem,” said Ms Kunoth-Monks in a recent press release as part of the Freedom Movement regarding the remote Newstart Allowance work-for-the-dole scheme that will require recipients to undertake 25 hours of work five days per week for 12 months a year in remote communities.

This is the Federal Government’s first policy response to mining magnate Andrew Forrest’s Indigenous employment report – it is a report that discriminates against both race and locality.

The remote scheme targets Aboriginal communities without government infrastructure and industry – in fact these communities are not supported in any meaningful way by Government. It is a policy that will force Homeland Communities to come into the already disease-ridden, overcrowded and poverty-riddled townships that are underfunded by Government. Townships that Aboriginal people escaped from over 40 years ago.

This continues policies that label our People and remain targeted towards one race. It builds division within the Australian community, subjecting our People to abuse and racist attacks in both news, social media, and physical attacks.

It is isolation that continues to promote the values of the West over and above and paints our People as useless, ugly and in need of assistance. Two hundred and twenty six years of White occupation in this country and still we have no autonomy in running our own affairs.

You only have to witness the Senate inquiry into government spending on Indigenous communities and watch one White person after another discuss our future direction and government policy to understand we have no say in our own future.

No matter how you spin it this is racism and this leads to low self-worth and yes this contributes to youth suicide. Work and education will not fix the hate people have for our mob in this country. There needs to be a re-education, a change in values that re-interprets our history and recognises the tens of thousands of years of the pre-colonial past of our People.

This cultural shift has to be a government priority in raising our social and cultural capital as Original First Australians if you want to see real change in our communities. Maybe after this re-education government may even consider funding some infrastructure and educational resources out in our Traditional Homelands rather than forcing the moving our mob off the lands to make way for Forrest and his crew to make billions more through mining.

Yeah, this is the same Andrew Forrest who presented the report on how we are to be ‘managed’ off our own lands. Only in Australia would this happen.

Why not share some of that stolen wealth taken from the Homelands equally with the Traditional Owners rather than just dispossessing them? There is enough wealth out there to end Aboriginal disadvantage for generations.

Oh, that’s right, Forrest, the same guy making billions and who wrote the report, said such equality of payments “are akin to mining welfare” in referring to the town of Roebourne, which he also said was “currently in a state of social breakdown.”

“We know what that does to communities and the heart of Fortescue, my own heart just can’t be part of that, it’s easier to do it but we won’t do it,” Forrest said.

It’s the same social problem – the difference is these people have money. So does income justify abuse? Apparently in Australia it does.

Sorry, Andrew Forrest and others … just as White people have the right to spend their money as they want even if it is to their own detriment then surely we have the same right?

Just as Justin Beiber, Robert Downey Jnr and Britney Spears are allowed to waste their money on alcohol addiction, gambling, drugs, sex and endless rehabilitation so are many white, middle-class Australians – our people are not – after all it is our resources you are mining!

Who knows, once we navigate through our trauma and realise we finally have some capital we may even invest in healing centres, raise our own expectations teach our own languages and have our Culture flourish.

The bottom line is to not give us that opportunity and instead continue with a Trojan horse of disadvantage that allows white miners open access to some of the richest mineral deposits in the world and take from us not only our natural wealth deposits but also our own decision-making is racist, it is bullying and it is stealing.

Again, no matter how you spin it, the effects are devastating.

During the G20 I spent time catching up with one of my nieces. She is 17 years old and stunningly beautiful, just graduated from high school and Black, very Black with beautiful dark skin. And yet she told me she wished she was fairer – in her own words “prettier”.

No surprises Lupita Nyong’o, who won the Oscar for Best Actress in her role in 12 Years a Slave, said in an acceptance speech at the Black Women in Hollywood luncheon hosted by Essence Magazine she remembered a “time when I too felt unbeautiful. I got teased and taunted about my skin.

My one prayer to God, the miracle worker, was that I would wake up lighter skinned.”

During the speech Lupita had to hold back tears as she shared the following: “When I was a teenager, my self-hate grew worse. I prayed to God for lighter skin.”

This is why our children are killing themselves, White Australia, because whether you accept it or not you make us feel “ugly”, we are the “unwanted trash” that you discard. You have no interest in our opinions unless, like Noel Pearson, Marcia Langton and Warren Mundine, those opinions agree with yours. You cross the street rather than walk past us, you hold your bags tight when we enter a room and breath a sigh of relief when we exit. It is a life experience that leaves us scarred.

It is why when you watch the Rugby League Dally M Awards you see Brotha after Brotha on the red carpet arm and arm with a White woman (I don’t watch AFL so I can’t comment).

Now I know that this will upset a lot of people but we have to get through the barrier of our trauma and identity as individuals to understand what’s happening as a collective.

Yes, love is love and no one should be told who they marry but I can count up to 30 Aboriginal role models in the public spotlight from performers to athletes who are married to or with non-Indigenous partners.

That’s just off the top of my head. I can’t think of one high profile couple who are both Indigenous except Choc Mundine and his wife, Danielle, who is Aboriginal.

Now compare that with the Polynesian and Maori boys who stand proud at the Dally Ms with their beautiful Black wives. These boys represent a strong Culture and maintain language and ceremony as positive reaffirmation whereas in Australia our Culture is not only absent, it is seen as negative.

It’s the same when our boys do the Corroborree before the Rugby League All Stars game and we need actual performers to come out and dance with them hiding the fact that these fellas don’t even know their own dance.

You have some of the best athletes in the world and yet they look so uncoordinated, unnatural and stiff when performing corroboree – that’s a shame job. Again I know people will be upset but we have to get past ourselves as individuals to move on as a community.

Yes, some of these boys have been denied their Culture, didn’t grow up with ceremony and haven’t performed corroboree in their lives. But don’t you see that is a problem associated to cultural theft and stolen intellectual property and so, yes, this reflects trauma.

Could you imagine the All Blacks needing performers to come on the field to hide the fact players didn’t know the Haka? I went to school in New Zealand and the Haka was compulsory no matter what colour or race you were.

That is the type of cultural shift that has to occur in this country, but it won’t while we refuse to deal with the trauma and oppression we face today … not in the past, today!!!

And yes Aboriginal Australia we have a self-loathing, trans-generational trauma that runs deep in our psyche that needs to be identified, healed and treated.

Just look at the language we use with each other. I remember when Black America first reclaimed the word “Black” in the phrase “Black is Beautiful” and then later the use of the word “Nigga” as opposed to “Nigger”. Yes Black Australia, Nigga isn’t a spelling mistake it has different connotations, relationship, meaning and history to the label Nigger.

If you were educated in Blackness, rather than Whiteness you would know this rather than being so offended.

I had this conversation with Steven Oliver of “Black Comedy” fame who told me he is absolutely opposed to and has often blogged his refusal to use both Nigga and of course Nigger in labelling our people and yet “you big slut” or “mole” is not only acceptable, it is regarded as quite funny and standard language amongst our mob.

So Nigga is OK for Malcolm X and Tupac but not alright for some Aboriginal people but “slut” is more than acceptable.

Sorry Aboriginal Australia but we are still hurting and scarred not only from the past but the present and until we collectively come together as a holistic approach to healing we will continue to self harm.

This was demonstrated in this year’s recent report released on Aboriginal Disadvantage that showed even though there are improving employment and educational outcomes, rates of suicide and self harm are the highest they have ever been.

All Australian governments have to listen to the research and in the words of Rosalie Kunoth-Monks “stop the assault.”