Thousands of homeless children, toddlers are the forgotten on Australia’s streets 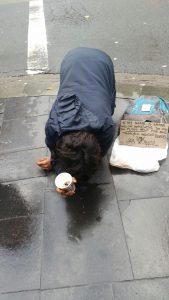 On every street corner in the heart of Sydney – Photo, Gerry Georgatos

Thousands, tens of thousands of children are forgotten by far too many, by our governments, in this nation, in the world’s 12th largest economy – one of the world’s wealthiest nations. In general, Australians have little idea of how many children under the age of 12 years are on our streets – homeless – of how many large families are on our streets – homeless.

More than 20,000 children under the age of 12 years are homeless – this is a moral abomination.

Yesterday, I spent the day with another large homeless family – with a single parent 50 year old mother , Tanya, with her six children, and with one grandchild, little Jerry – 2 ½ years old. Not little Jerry, nor his young mum and his uncles and aunts, the youngest aged 10 and 11 years, none of them should  be homeless on the streets. But they are.

We were not put on this earth to betray one another but indeed so most certainly do we do betray those who need us most.

Tanya’s family has been homeless since October 2014 after losing their public housing home because they could not afford to pay the bills.

If meritocracy is to be a ruthless paradigm and a safe place only for the successful and if meritocracy continues to punish those who fall behind, who are not successful in the material ways far too many are obsessed with, then the homeless are going to grow in numbers. We are living in a society where many do well, but increasingly more people are living below the poverty line – indeed millions are living below the poverty line. For many of them, they are only several pay packets away from homelessness.

My heart broke mid last year when I visited Sydney’s Wentworth Park and saw first-hand the extensiveness of homelessness in Australia’s most affluent city – more than 200 tents of homeless people – a shanty in the heart of Sydney. At the last Census, Wentworth Park recorded nearly 300 homeless people. But what has become of these people? The ruthless City of Sydney Council has since ‘evicted’ the majority of the homeless from Wentworth Park – taking their tents and many of their belongings. Who takes the tents and only belongings from the homeless? Certainly the City of Sydney and City of Perth Councils do, and they do not bat an eyelid. Many of the homeless evicted from the once safe space of Wentworth Park or the ones who have had their tents nicked by the City of Perth once again sleep in congested alleyways and squats. But many also fear these lonely traps, for far too often they fall victim to violence, bashings and sexual assaults.

In Sydney, many of the homeless in the bid to remain safe from assaults sleep in open view, on street corners and outside or just inside railway stations and bus depots. Recently I was once again in Sydney and late one night walked to Central Railway Station where the homeless were sleeping next to each other, head to toe, outside the station. An affluent city surrounding them and yet they are forlorn, forgotten, as if untouchables. Inside the outer perimeter of the station, there were some 50 people, young and older, sleeping. During that night the temperature dropped to 2 degrees Celsius.

On every street corner, without fail, in the heart of the commercial and retail sanctum of the busy centre of Sydney there are the homeless squatted or begging for a few meagre coins. Homelessness is a sadness in every Australian city and in every major town but Sydney is what the future will be soon for many of our other cities and major towns if we do not step up and prioritise the plight of our most vulnerable, of our homeless, of our children on the streets.

Little Jerry, his mum, his uncles and aunts, his grandmother need not be homeless. But they are. There is no greater legacy that any society can have, that any of us can have than to help one another, than to improve the lot of others, than to change lives, than to save lives.

This family were squatting in a vacant house in an inner city area of Perth; it is all they could find. They have given up on securing assistance from the Department of Housing, from Homeswest or from the not-for-profit funded organisations. Shire officers, escorted by police, recently threw them out of the vacant squat, and nailed a condemned building sign on the property. They told them not to return.

Were they assisted to emergency accommodation? To any form of crisis care? You would think so. But no, they were told to just move on. Yep, society and its various instruments might as well throw away their moral compasses, they do not work.

I always remind that all structures – that is councils, shires, government instruments, governments, organisations – are people. All structures are made up of people. All policies are the works of people, crafted by people. Where are the individuals in these ‘structures’ to stand up, to pursue change, to highlight the needs basis, to push through-care, to conscientiously object? Far too many have excuses. No excuse washes, not one.

Far too many officers at government instruments tell the homeless or those in financial predicaments and on the edge of being cast homeless that there is nothing they can do for them – and that they should buy some tents and pitch them somewhere out of sight, somewhere relatively safe.

In Perth, Jennifer Kaeshagen and I have assisted many large homeless families. We have been able to do for some of these families what government departments and well-funded organisations have abysmally failed to do, and that is in finding them a home. Last year we housed a family of eight children who had been living in an asbestos riddled condemned dwelling with no water or electricity. We housed a family of six children that had been living in tents off a major highway for ten months. In January, Jennifer housed a family of nine children, the youngest child 30 days old. And on it goes but in the end there are ‘tsunami’ like waves of extreme poverty, of homelessness, of small and large families tossed to the streets.

Where there is a will there can be a way. For the first time, I will describe something I did over a period of ten years. I brought off the streets more than 140 odd people into education and employment and for the majority into a home. I brought many into our Perth universities via alternative entry programs. Many of them I brought into university education at Murdoch University where for several years I was the general manager of the Murdoch University Student Guild and the coordinator of Students Without Borders. I worked alongside the Equity Department at the University and used their entry programs to help those who needed us most. To assist them at the point of the entry, to help them upskill, I created one program after another – tutoring programs and computer literacy programs – to get them to speed, to ensure that the majority of them succeeded with their university education.

Several of them are now PhDs, one works in the highest offices of government.

Where are our governments? Where are those who make up our governments? Why do people join political parties and seek candidacy? Is it to help their fellow person, to remedy a wrong or is it about themselves? Where are the parliamentarians relentless in the journey to culminate real justice, equality, in making difference, in housing people for instance? Those who we vote in to parliament need to sustain the battle to achieve this, to be unrelenting, and not just speak to this as some sort of tucked away issue every once and a while.

The fact that seven per cent of the whole of the Kimberley region is in one form of homelessness or another, and that nearly 100 per cent of the homeless are comprised of Aboriginal and/or Torres Strait Islander is a moral abomination – and because it is racialised, it is therefore racism.

The fact that seven per cent of the Northern Territory’s First Peoples are homeless is a moral abomination, racialised and racism. 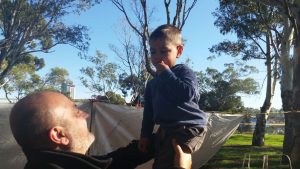 Two and a half years old Jerry should not be living on the streets, but he is – homeless – this should not be the way in this affluent nation, but it is – Photo, Jennifer Kaeshagen

I hurt as I held little Jerry. I hurt as I looked into his eyes, into his mother’s eyes, into the children’s eyes. They are now sleeping in a park. The City of Perth took their tents away and want them to move on. To where? To somewhere that they do not have to see them. This is a sickening attitude for anyone to hold.

For goodness sake help them, instead of hurting them further.

Jennifer Kaeshagen is searching for a home for them. But it should not have to be this way. It should not. Our governments – local, State and Federal – should ensure little Jerry, 2 ½ years old has a home in the care of his mum, and so too his ten and eleven year old uncles and their siblings.