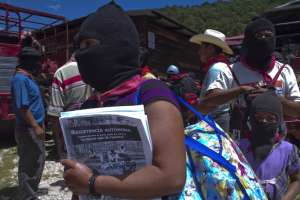 Yesterday, 1,700 students from around the world enrolled in the first Zapatistas school, held at the University of the People’s Land of Chiapas. (WNV/Moysés Zúñiga Santiago)

Last December, tens of thousands of indigenous Zapatistas mobilized, peacefully and in complete silence, to occupy five municipal government office buildings in the state of Chiapas, Mexico. That same day, which coincided with the end of one cycle on the Maya calendar, Zapatistas released a communiqué, asking, “Did you hear it?”

It appears that the answer was yes, because this week thousands of people from around the world are descending on Chiapas for the Zapatistas’ first organizing school, called la escuelita de libertad, which means the little school of liberty. Originally the group allotted for only 500 students. But so many people wished to enroll that they opened an additional 1,200 slots for the weeklong school, which begins on August 12.

Just as the Zapatistas have, for two decades, rejected hierarchical systems, the escuelita will also eschew traditional teaching models. Instead, it will be an open space for the community to learn together.

“There isn’t one teacher,” wrote Subcomandante Marcos, the spokesperson for the Zapatista movement. “Rather, it is the collective that teaches, that shows, that forms, and in it and through it the person learns, and also teaches.”

While attending the escuelita, students will live with a family in a rebel zapatista community and participate both in the school and in the daily life of the community. Participants will cut wood, work in the cornfields and cook and eat with their host families.

Subcomandante Marcos acknowledged that attending this type of school requires shifting one’s way of thinking about learning and indigenous communities. As he asked in a communiqué:

Would you attend a school taught by indigenous teachers, whose mother tongue is typified as “dialect”?

Would you overcome the urge to write a report, interview them, tell them your opinion, give them advice, orders?

Would you see them, that is to say, would you listen to them?

Leading up to the school, the Zapatistas published a series of seven communiqués entitled “Them and Us.” These essays illustrated the absurdities of “those from above” — those who hold coercive and repressive power — trampling the freedoms of “those from below.” The writings also spoke to the need to learn by observing and listening in order to build an alternative world. But more than abstractions, the seven publications were a collection of lessons about how everyday life in the Zapatista communities, including how people resolve problems and how they organize themselves into an autonomous networks in which the people rule and the government obeys.

The last installation of this manual, published on March 27, also announced the upcoming escuelita and outlined three requirements necessary for any applicant: “an indisposition to speaking and judging, a disposition to listening and seeing, and a well-placed heart.”

The Zapatistas are unique not only for challenging power or maintaining their resistance for nearly 20 years. What sets them apart is their ever-evolving definition of liberty, and this topic — liberty according to the Zapatistas — will be the central focus of the school. According to Subcomandante Marcos, liberty is “to govern and govern ourselves according to our ways, in our geography and in this calendar.” But the definition also shifts from generation to generation, and Marcos explains that new generations must find their own paths through rebellion and dignity.

The experience of living with Zapatistas and other indigenous families will be another central part of the school. Some students will stay with families living in autonomous rebel communities, while others will be with nearby non-Zapatistas, or even anti-Zapatistas families. These hundreds of families have all agreed on a votán, a person who, in the Zapatista movement, represents a guardian and the heart of the community. The votáns will translate for the families and the foreign students, although Marcos acknowledges that translation itself is an imperfect process.

“In legal cases, do cultures translate?” he questions. “In that sense, one understands that what they call ‘equality under the law’ is one of the greatest travesties of justice in our world.”

As for final evaluations, the school won’t, unsurprisingly, have an exam, a thesis, or a multiple-choice test. Rather, as Marcos explained, the school “will make its own reality,” and the results will be “a mirror.”

The school began after three days of festivals in rebel communities to celebrate the 10-year anniversary of the councils of good governance, the Zapatistas’ autonomous governing system in which the community makes decisions and the government carries them out. During the celebrations, one could see empty buses and vans parked along the streets to Ocosingo and Palenque, waiting to transport the 1,700 students from San Cristobal de Las Casas into the rebel communities the following morning.

Earlier this summer, the Zapatistas announced that future escuelitas in the Zapatista communities will be held this coming winter.