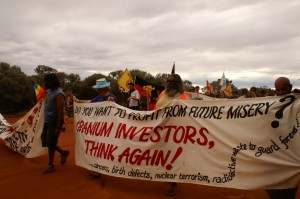 The 2014 Walkatjurra Walkabout will begin Thursday at Yeelirrie Station, Western Australia’s biggest uranium deposit, now owned by one of the world’s biggest uranium companies – Cameco. Elders from across the nation will lead the fourth Walkatjurra Walkabout, through Country in opposition to the proposed Yeelirrie uranium mine. Western Australia is on the brink of large scale uranium mining across the State.

The walks have been a cultural exchange, learning about Country and culture, and about the Elders-led resistance to the nuclear industry and the potential destruction of Country by uranium mining.

Each year more than 100 people have walked the hundreds of kilometres, led by Walkatjurra rangers from Leonora. This year there are already 23 children registered for the walk, once again 100 people.

Yeelirrie Traditional Owner and chairperson of the First Nations-led Western Australian Nuclear Free Alliance, Kado Muir said that his peoples have been fighting for years to stop uranium mining coming to Western Australia.

“We will not surrender the future and the legacy that we need to leave our children and their children by sitting idly by while uranium is mined.”

“It’s toxic. Its dangers cannot be guarded against. The only safe place for uranium is for it to stay where it is,” said Mr Muir.

“This walk is about building alliances with the conservation movement, with Aboriginal communities. Each step we take is a step towards a nuclear free future for our communities.”

“Our Elders will not walk away from this fight.”

“For forty years we have protected Yeelirrie, and as the fight tightens so will we step up.”

The Walk’s organiser, Marcus Atkinson said that people from around the world do the walk. “People from France, Finland, Japan, New Zealand, Scotland, Germany, Greece have joined in the Walk as part of a growing and united international campaign against the whole nuclear industry.”

Each year, walkers endure the dry and the wet, and they walk through rain. Mr Atkinson said that during the last walk they walked 18km in winds and rains on the one day.

Each year during the Walk as they approach Kalgoorlie, they meet up with Wongi Pastor Geoffrey Stokes.

“Uncle Geoffrey brings his friends from Kalgoorlie, and we enjoy great company and entertaining stories, not to mention the kangaroo tails,” said Mr Atkinson.

At the camp Pastor Stokes visited last year, Mr Atkinson said, “the camp that night was in an amazing location and a stunned sunset heralded a peaceful night under the stars. As the moon was growing, our destination was getting closer to us, we were introduced to the traditional way of looking at the moon.”

Pastor Stokes said that people belong to the land “rather than the other way around.”

“This is what the misdirected greed of a misguided society do not understand and have lost themselves within, and instead rape the land and steal the legacies our children and our children’s children should be born in.”

“They do not care at the damage they do, to all of us, to our people and to the land which by any stretch of the imagination or understanding we were to look after. This is not just their loss but a loss everyone feels, all people and mother earth,” said Pastor Stokes.