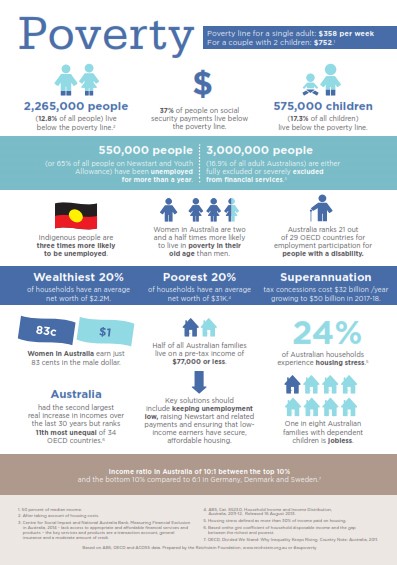 This quote that forms the title of this article is from Adam Smith, the Philosopher and Economist who is considered to be the Father of Modern Economics. He is best known for two classic works: “The Theory of Moral Sentiments” and “The Wealth of Nations”. Importantly he is also regarded as the creator of the concept of free market economic theory.

The issue of poverty in Australia has always been a matter of some contention. There are many who would point to the obvious signs of poverty in some of our neighbouring Asian countries and point out that there aren’t similar issues here.

The Australian Council of Social Services (ACOSS) puts out a report on Poverty in Australia regularly. The results are staggering. Rather than attempt to paraphrase their findings I reproduce them below in full: The report can be accessed here:

This report found that there are approximately 2,265,000 people, or 12.8% of all people in Australia who are living below the OECD poverty line of 50% of median wage. The report also found that there were some groups particularly at risk, including: people without paid work, children (especially in sole parent families), and people whose main source of income is social security payments.

The poverty report found that: