The power of the corporate (private) prison industry 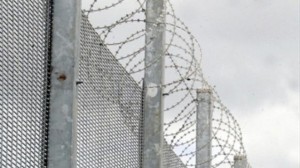 “Research to date on private prisons has found that they perform no better than publicly operated facilities, are not guaranteed to reduce correctional costs, and provide an incentive for increasing correctional and detention populations. Despite these repeated failings, many countries, including those facing serious problems in the quality and capabilities of their correctional systems, have followed the United States in adopting a flawed and shortsighted scheme.”

A Report by the Sentencing Project titled International Growth Trends in Prison Privatization shows that Australia has the highest proportion of prisoners in private (corporate) run prisons in the world. 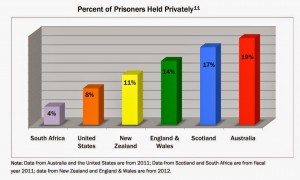 The population of people held in private prisons in Australia has increased 95% in the past 15 years. In that same period, the number of prisoners in state-run jails grew by 50 per cent and the total prison population increased by 57 per cent.

The rapid and consistent increase in the number of prisoners over the last two decades, coupled with a 106% prison occupancy rate, creates an opportunity for private prison corporations to thrive.

Another reason for the growth in the numbers of detainees in corporate run prisons in Australia has been the enormous growth in the number of asylum seekers detained in immigration detention prisons run by Serco (on shore and Christmas Island) and Transfield (Naura and Manus Island).

What is happening in Australia is consistent with international trends. The report International Growth Trends in Prison Privatization by the Sentencing Project found that:

The private run prisons  are immensely powerful and profitable, with the corporations involved in running private prisons making increased profits across all jurisdictions in which they operate.

“The prison industry complex is one of the fastest-growing industries in the United States and its investors are on Wall Street. “This multimillion-dollar industry has its own trade exhibitions, conventions, websites, and mail-order/Internet catalogs. It also has direct advertising campaigns, architecture companies, construction companies, investment houses on Wall Street, plumbing supply companies, food supply companies, armed security, and padded cells in a large variety of colors.”

Even a pro-prison privatization advocate, such as Professor Richard Harding notes that the prison corporations such as GEO and Serco are more powerful than the governments they deal with.

Private prison corporations have a vested interest in mass incarceration and policies that result in more people being imprisoned. As Paul Allizi writes:

“The larger the prison population, the longer the sentences, the larger the payout under government contracts. The more prisoners, the more prisons, the more growth. Cheaper facilities and fewer services mean more profit. These inescapable relationships are the source of the potential conflicts of interest. The incentives of private prison companies can easily become opposed to the aims of the humane containment and rehabilitation of prisoners- the very purpose of corrective services”.

Corporate run prisons in Australia are:

Even though Australia has the highest proportion of prisoners in private (corporate) run prisons in the world, State Governments plan to radically expand the number of private prisons, despite serious questions about the evidence upon which prison privatization is based. (see the paper Private Prisons in Australia: Our 20 year Trial in the online journal Right Now: Human Rights in Australia and the recent report The Cost of Private Prisons by the US based group In the Public Interest).

The report The Cost of Private Prisons concludes:

“The private prison industry claims that governments can save money by privatizing prisons, but what does the evidence actually indicate? To maximize returns for their investors, for-profit prison companies have perverse incentives to cut costs in vital areas such as security personnel, medical care, and programming, threatening the health and safety of prisoners and staff. Yet research and the recent experiences of states show that the promised cost savings often fail to materialize for government agencies that contract with for-profit prison companies. Furthermore, proponents of prison privatization may employ questionable methodology when calculating costs of private facilities. This includes finding ways to hide the costs of private prisons, ensuring that increased costs are not apparent until after the initial contract is signed, and using inflated public prison costs during comparisons.

In Queensland, the Newman Government has established a secret Task Force to develop a plan to hand over all Queensland’s prisons to the corporate sector. This would make Queensland the only jurisdiction in the world where all prisons are run by private corporations.

In NSW, the O’Farrell Government commissioned a secret report by the pro- privatization consulting form KPMG which recommended that 11 NSW prisons should be privatized.
In Western Australia, the Barnett Government and Joe Francis, the Minister responsible for Prisons have used  the privatization of more prisons, including juvenile prisons  in Western Australia  as a threat to impose their prison and corrective services reform agenda.
Categories : General News