The Planned Parenthood shooting, domestic terrorism and the Christian right-wing war on women 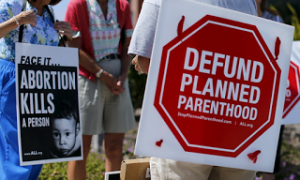 It is offensive and outrageous that some politicians are now claiming this tragedy has nothing to do with the toxic environment they helped create,”

Planned Parenthood Executive Vice President Dawn Laguens
As someone who worked for 6 years in the area of sexual and reproductive health here in Western Australia, it is chilling to see colleagues in the US being murdered, shot, assaulted and attacked for doing the daily work of supporting and defending women’s sexual and reproductive rights.
On November 27, in Colorado USA, Robert Lewis Dean opened fire outside the Planned Parenthood health center in Colorado Springs, murdering 3 people and wounding another 9 in a five hour shootout with Police.
The clinic was equipped with bullet proof vests and a safe room.

Those killed were Jennifer Markovsky, who was attending the clinic with a friend. Garrett Swasey, the Police Officer who first responded to alerts about a shooter at the clinic and Ke’Arre Stewart, a former Iraq war veteran who was standing outside the clinic. Stewart was wounded but managed to enter the clinic and warn those inside to take shelter and call 911.

Vicki Cowart, president and CEO of Planned Parenthood Rocky Mountains released a statement that eyewitnesses confirmed the attacker “was motivated by opposition to safe and legal abortion”.
While anti-abortion advocates and conservative politicians condemned the shooting, there is little doubt that the rhetoric of pro-lifers and Christian extremists and their targeting and demonization of providers like Planned Parenthood, contributed to a culture and environment where some believe it is justifiable to attack clinics and murder doctors and health providers, simply because they provide women with sexual and reproductive services and abortion.
The toxic rhetoric of the Christian right, pro- lifers, Christian extremists and Republican politicians encouraged the use of violence to attack and close down Planned Parenthood services and health professionals and women attending clinics.
Reproductive health and abortion providers have suffered an unprecedented increase in hate speech, violent threats and attacks.
In the Nation magazine Zoë Carpenter noted that the shooting comes at a time of escalating violence directed at Planned Parenthood and abortion clinics:
In September, the FBI noted an increase in cyber attacks and arsons, and warned that it was “likely criminal or suspicious incidents will continue to be directed against reproductive health care providers, their staff and facilities.” In October, a Planned Parenthood facility in California was fire-bombed, following three similar incidents in Illinois, Louisiana, and Washington. A clinic in New Hampshire was spray-painted with the word “murderer,” and then, a few weeks later, attacked by an intruder wielding a hatchet.
Attacks, cyber attacks, arson, vandalism, threats and violence against sexual and reproductive health clinics and Planned Parenthood have escalated dramatically  following the release of manufactured and doctored videos which alleged that Planned Parenthood traded in body parts.
Robert Dean alluded to that video when he told investigators after the shooting ‘no more baby parts’, referencing a wildly discredited meme circulated by Fox News and other right-wing outlets.
Valerie Tarico characterised the shooting as an example of stochastic terrorism, motivated by the rhetoric of the Christian right:
“Stochastic terrorism is the use of mass communications to incite random actors to carry out violent or terrorist acts that are statistically predictable but individually unpredictable. In short, remote-control murder by lone wolf.”
Tarico points the finger directly at Republican politicians and right wing Christians:
“After months of verbal assault against Planned Parenthood and against women more broadly, Republican Christianists have gotten what they were asking for: bloodshed……. For months, Republican presidential candidates and conservative Christian members of Congress have been following this script for political gain. Elected Republicans in the states have sought to intimidate women and providers by demanding the release (and even publication) of identifying information and addresses—essentially a target list for perpetrators.”
The extremist Christian right were quick to respond to the shooting in their usual style on Twitter:
“No sympathy for any pregnant female who was injured in the Planned Parenthood shooting that was there to get an abortion. She deserved it.”
“We should terminate the 500,000 female humans. They could have protected sex. But they’re too lazy and slutty.”
“Active Shooter Colorado Planned Parenthood. I would think this brave HERO is saving innocent Baby lives!”
Media reporting of the shooting avoided use of the term ‘terrorist’ to describe the shooter, referring instead to a ‘disgruntled’ or ‘lone gunmen’.
Vicki Cowart, president of Planned Parenthood of the Rocky Mountains, directly linked the shooting to domestic terrorism when she noted that while the motive for the shooting is unknown it does reflect the ‘concerns of many Americans that extremists are creating a poisonous environment that feeds domestic terrorism in this country.
The shooting is further evidence that the greatest terrorist threat to the American people is white American male extremists, particularly right wing and religious extremists.
The website International Security documents killings of over 50 Americans by right wing and Christian extremists since 2001, compared to 26 Americans killed in jihadists attacks.
The attorney general, Loretta Lynch, called the shooting a “crime against women” getting care at Planned Parenthood.
William Rivers Pitt also noted that the shooting reflects a war on women:
“This is the war on women, underscored. The bellowers who cluster outside these clinics are preventing women from getting checked for cervical cancer, for breast cancer, preventing them from getting birth control, basic OBGYN care and abortions. Why? They would rather see women dead than see them free, and some of them take up arms to reinforce the point.”
Since 1977 Planned Parenthood has been the target of 8 murders, 17 attempted murders, 42 bombings, 186 arson attacks, 153 incidents of assault or battery, 100 butyric acid attacks, 373 physical invasions, 383 death threats and 655 anthrax threats from pro life and anti abortion activists. This does not include  similar attacks on independent abortion clinics and private reproductive health clinics.
This is despite only a small proportion of Planned Parenthood services (around 3%) being abortion services. The majority are contraception, reproductive and sexual healthcare and STD screening.
In the New Yorker magazine Amy Davidson noted the silent and muted response of the Republican Presidential candidates to the shootings and highlighted the role Republican Presidential candidates and Republican politicians played in creating the toxic rhetoric directed at Planned Parenthood. So did John Nicholls in The Nation magazine.
In a recent Republican Presidential candidate debate, candidate Ted Cruz described Planned Parenthood as a ‘criminal enterprise’ that was guilty of ‘multiple felonies.’ He supported Americans rising up to fight against Planned Parenthood.
Davidson wrote: The loudness of the slurs against the organization is in telling contrast to the cautious silence that descended when it became a target of gun violence.
Categories : General News