The photographic exploitation of victims of economic depression 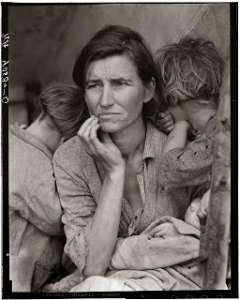 “I wish she (Lange) hadn’t taken my picture. I can’t get a penny out of it. She didn’t ask my name. She said she wouldn’t sell the pictures. She said she’d send me a copy. She never did.”
Florence Thompson

How could it be that someone could take a photograph of someone else, which photograph produces millions of dollars in income, and the subject not receive a single penny? Isn’t there some way that Florence’s descendants can be compensated? Don’t they have rights? Can they sue the photographer?
Craig Manson

Few people have heard of Florence Thompson, even though she is the subject of six of the most famous and iconic photographs of all time.

The photos have come to define an entire era in history, specifically the effect of the 1930’s Great Depression and the Dust Bowl era on ordinary working people in the USA.

Florence Thompson- then Florence Owens– (and two of her children) are the subject  of Dorothea Lang’s most famous photographs, taken in a Californian pea pickers camp on a cold winters day in 1936.

Florence Thompson was a widowed migrant worker and mother of seven when the photos (referred to as Migrant Mother) were taken by Lange during the Great Depression.

The story of how the photos came to be taken is here.

In 1936, the U.S. Farm Security Administration (FSA) had hired Lange and other photographers to document life during the Great Depression. The agency believed that pictures had the power to incite the middle class and move the Roosevelt government to take action for the better.

The photos were used  to portray the fear and struggles of working class families trapped in terrible poverty whilst engaged in the basic tasks of everyday life under the degraded economic and social circumstances wrought by  the Great Depression.

As Robert Hariman and John Louis Lucaites note, citing Wendy Kozol, the use of impoverished women with children to represent poverty was an established convention of visual culture at the time.

Hariman and John Lois Lucaites also describe how the image and its iconic status came to be exploited commercially and politically in the USA to promote capitalist economic prosperity.

However, they argue that the image still acts as a resource for advocacy on behalf of the dispossessed and the economically marginalized in contemporary society.

Lange didn’t ask Florence Owens’s name when she took the pictures. In the 1970s she identified herself in a letter to a local newspaper editor signed Florence Thompson. 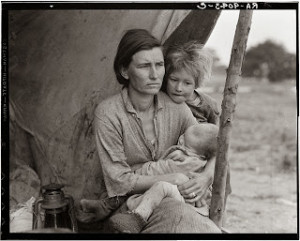 As Craig Manson points out in this article, Lange received no royalties from the photographs as she was working for a US Government agency for whom she took the photos.

As Craig Manson points out whilst individuals and enterprises have profited handsomely making tens of millions of dollars out of the photo, neither Florence Thompson (who died in 1988) nor her family have ever seen a cent.

Manson goes on to explore whether Florence Owens (Thompson) had any rights with respect to the photographs:

How could it be that someone could take a photograph of someone else, which photograph produces millions of dollars in income, and the subject not receive a single penny? Isn’t there some way that Florence’s descendants can be compensated? Don’t they have rights? Can they sue the photographer?

The photos have featured on US postage stamps, in Bill Clinton’s political campaigns, in advertisements to sell all sorts of commodities, on magazine covers and in charity fund raising.

The US Library of Congress sells prints for $28 each and for $85 patrons can purchase a framed print containing a quotation from Dorothea Lang herself.

So what is Manson’s conclusion?:

Because the photographs were original works of the United States Government, and because federal courts have ruled that the Copyright Act trumps state publicity laws, it is unlikely that her descendants will ever have a claim to any of the millions of dollars made from the picture of their mother and some of her children.

An 1983 interview with Florence (Owen) Thompson can be found here.