The oppressed are blameless 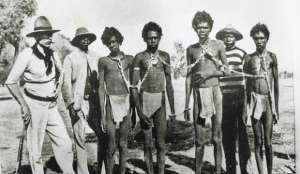 Australia is borne of sins – and the original sin was its sweeping, relentless brutality to the First Peoples of this continent. Australia’s original sin was borne of and cavalcaded by racism – people were murdered, hounded off their lands, cruelled in every imaginable brutal inhumanity, corralled and tormented. The oppression was relentless but the oppression is not over. Not when nearly 40 per cent of Black brothers and sisters live below the poverty line. For they remain tormented by the oppressor’s rod; it comes in many forms – in the racism that lampoons their lot and depicts them as lazy and irresponsible instead of understandings of the depth of their trauma, from the cradle, and the damage to their psyche, denying them a positive self.

Many have climbed out of the abyss of two hundred years of the vilest racism and ruthless oppression but that does not mean everyone can. Some have it worse than others and the helping hand, the spreading of the love, are imperative.

Oppression is the historical signature piece that has led to the Australia we have known since the late 18th century. The firmament of oppression remains intact. White privilege dictates. The viciousness of the oppression that ‘Australia’ dished out has culminated in narratives of near inescapable human misery and suffering. The moral abomination of racism holds today an almighty grip despite the public unravelling of the horrors of the modern Australian nation’s cruelties, generation after generation upon Aboriginal and Torres Strait Islanders.

The deal should be to help the oppressed and to get the oppressor to stop.

The victim will need some sort of validation, whether in healing, trauma recovery, reparations support. The examination of the why and how a problem has come about must squarely focus on the perpetrator, on the oppressor.

Trauma can be aggressive and complex. The royal commission into institutional child sexual abuse has reinforced this. How many have suicided, how many lives broken, how many lives from the broken to the ruined? The royal commission has got this right, that the abuses are the problem. They were abused. There were perpetrators of the abuses. This is how it always goes with the majority of trauma.

The mantras of self-responsibility don’t cut it, instead they displace more anger, infuriate rage and compound trauma with more trauma – multiple trauma layered thick and fast. This is where pushing around people ‘to get over it’ is cruel and for Aboriginal and Torres Strait Islander peoples it translates toxically as racism – indeed it is racism.

This is why two of my Masters and my doctoral research included focus on racism. This is why I am a prolific writer about the still relatively un-discussed systemic issues that perpetuate racism/oppression. I am irregularly hounded by the naysayers and by aggressive racist groups who set up blog sites slagging me as some sort of abomination. However my focus is the oppressor and will remain so. My youth haunted me, where as a member of a migrant family, we were lampooned by many, treated differently, racially slurred. It used to frustrate me when the migrant communities of my day called for silence on our part, that in the decades ahead much would change. Today, I am at least relieved there is a greater opportunity to challenge racism but also saddened that the respect for the polycultural societies that should be today is still denied.

Please understand that I do not want, and have never wanted to hold the oppressor hostage to their faults, to their wrongs. Indeed they are now down the chain of the original sinners. However they too are with sin. There continues a hostile denial of racism by the majority of White Australians, a putrid resistance to any authentic conversation of racism.

How is it possible that remote non-Aboriginal Australia enjoys superior social infrastructure to Aboriginal and Torres Strait Islander remote homelands? Some say to me that in my writings and conference speaks that I go for the throat. Many urge me on. I don’t need urging on because I am guided by what my eyes have seen, what my ears have heard.

How is it possible in one of the world’s most affluent nations that in Gunbalanya the first two Aboriginal female secondary school graduates were in 2013? What hope for the rest of their generation and for the unborn? How is it possible in the whole of Groote Eylandt there have only ever been a handful of secondary school graduates? What hope for their generation and of the unborn? Is it right that a community, no matter how remote, should have to beg for clean water? Have to beg for the maintenance of their water tank? Have to beg for power lines? Have to beg for their school not to be closed? Have to beg for quality education? Is it right that too often silence denies this? Can you imagine this occurring in any predominately White Australian remote or regional community or town? There would be national outrage. The extreme poverty, the degradation of these communities are the making of one government after another. Plain and simple, it’s racism.

No-one in the nation has written more widely than me about suicides and suicide prevention – and disaggregated to Aboriginal and Torres Strait Islanders, to migrants, to Australians in general, to our children.

How is it possible that in this big economy nation, with among the world’s highest median wages that nearly 40 per cent of Aboriginal and Torres Strait Islander people live below the poverty line? With a significant proportion living dirt-poor, third-world-akin. How is it possible that this nation tolerates one of the world’s highest suicide rates? One in 18 of Aboriginal and Torres Strait Islander deaths is a suicide – a staggering narrative, but it’s even worse, more harrowing, it’s underestimated because of reporting issues – around one in 10 deaths is a suicide. Nearly all the suicides are from within the 40 per cent who live below the poverty line. More than 30 per cent of Australian child suicides (to 17 years of age) are of Aboriginal children. More than 80 per cent of the suicides of Australian children aged 12 years and less are of Aboriginal children. If this is not racism, if this is not the result of oppression then what is it? It is a humanitarian crisis – catastrophic – yet it is not the pressing issue of our time. The oppressor and racism carries on effectively uninterrupted.

The oppressor protects itself with cheap justification that the original sin was the product of the stream of consciousness of the time – and some go as far arguing “intentions of well-meaning.” Hostile defiance – refusals to be held accountable. They deny the opportunity to atone. Without atonement there are no ways forward.

The majority of the nation’s parliamentarians have at least a century’s worth of familial history on this continent – history steeped in racism and the majority are kept hostage to origins-of-thinking a century old.

There were good people who started out in seeking to make difference by examining the victim – the oppressed – but we are well past the need for this. It is a national disgrace that an industry of researchers draw away vital funding to themselves and blindside hope. The examination has to shift from studies of the oppressed instead to the oppressor in the effort to free everyone into equality and the right to be as we so see fit.

Funding needs to be focused on the 40 per cent living below the poverty line – a triage-based approach. Slewing funding to the well-heeled and away from starving children, from families tormented by hopelessness and helplessness is the pits. We won’t end corruption and many other wrongs but we can radically reduce the dirt-poor levels of Aboriginal and Torres Strait Islanders.

Examine the oppressor. The oppressed are blameless.

–          One in 8 of Aboriginal and Torres Strait Islanders have been to jail – one in 6 in Western Australia and the Northern Territory.

–          A 15 year old was sent to juvenile detention for stealing stationery and pens for school – he took his life days later.