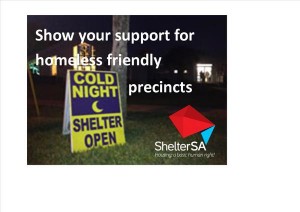 Support has been accumulating for homeless friendly precincts. In recent weeks, City of Perth Lord Mayor Lisa Scaffidi has pledged her support. The City of Perth is working on proposing a location within its jurisdiction. Georgatos has also been invited by the City of Perth to present the concept to one of the council’s steering committees. The City of Wanneroo Mayor Tracey Roberts was the first to pledge her support and it appears that the City of Wanneroo shire will lead with the nation’s first homeless friendly precinct. Mayor Roberts already has her shire’s planning and community services departments working on the proposal. Last week, City of Fremantle Mayor Brad Pettitt also pledged his support and is taking the concept to his councillors where it is likely to be supported.

Georgatos said, “Homeless friendly precincts are in the least a few hundred square metres of showers, laundries, small storage facilities, a treatment area, safe space, even an area where services can attend; something as simple as a rostered barber. I have spent more than 20 years assisting the homeless and there is the recurring cry, ‘I just want to shower daily, wash up, feel clean, somewhere to store my stuff…’ This is the most basic sliver of dignity we can provide. Psychosocially it’ll make a significant difference.”

“When I was in the tertiary sector I assisted many homeless, ex-inmates and others into tertiary education despite disrupted backgrounds and the most difficult of circumstances, despite many of them homeless. It took time to win them over to the potential of education despite their everyday hardships. Often I’d lose track of the homeless in particular as they moved from squat and trap and alleyway and park to avoid violence and sexual predation – that’s the everyday reality of homelessness. With a homeless friendly precinct, a safe space we can meet again and again. The precinct would be a reference point for various services to wraparound the homeless and assist much better.”

Georgatos lives by the theme that “there is no greater legacy than to improve the lot of others, to the point of changing lives, saving lives.”

Thus far the concept of homeless friendly precincts is about showers, laundries, storage, access to treatment daily, a meeting and safe space but it can be whatever more the shires want it to be. Lord Mayor Scaffidi has suggested a dining area, a food hall while others have suggested including various forms of shelter and computer facilities and WiFi.

Dr Clark said, “Shelter SA is the peak body for housing in South Australia with a vision for every South Australian to have an affordable, safe place to call home. With a quarter of a million people accessing homelessness services across Australia each year, Shelter SA stated it cannot achieve their vision. A lack of social and affordable housing is directly related to the huge numbers of people who are doing it tough and there are no quick answers.”

“Shelter SA supports Gerry Georgatos’ idea, put forward in his article in The Stringer and elsewhere to create homeless friendly precincts. According to Jennifer Kaeshagen, Director of the First Nations Homelessness Project, “It’s time for homeless friendly precincts.  Safe spaces where people experiencing homelessness can go to 24/7, no waiting lists, no questions asked – people’s privacy, sensitivities respected. Places where the compassionate public can drop off donations to. Places designated, designed for people experiencing homelessness, places they will not be moved on from, shamed. Places that belong to them.” Shelter SA agrees, “social and affordable housing is a must, but in the meantime we should be implementing homeless friendly precincts as a matter of urgency,” said Dr Clark.