Australia was founded on bloodshed, and its historical identity and its origins-of-thinking include slavery (blackbirding), social engineering, apartheid, racism. To deny all of this is to keep Australians hostage to the various veils and layers of racism. Understanding the past is to free up the present and the future from being held hostage by lies. Far too often our ability to discover the truth has been outstripped by the capacity to manifest deceit.

Last week, Western Australia’s Governor, Malcolm McCusker, in what was a surprising gaffe or an act of ignorance claimed in a speech to a joint sitting of Parliament that Australia as we know it was “achieved without civil war or bloodshed.”

Roebourne Prison inmates – for crimes like ‘absconding’ from ‘blackbirding’ – slavery. Those who resisted strongly were sent to Wadjemup (Rottnest Island) and Fremantle Prison – most never to return. The word they used for policeman was “Marndamarangga” and means “chainhand” and is still used today.
(Photo: Battye Library, WA)

Governor McCusker asserted that Australian democracy and its Government arose without civil strife. This was all too much for the Deputy Leader of the Opposition, Roger Cook who challenged Governor McCusker’s comments. Mr Cooke has married into an Aboriginal family.

Mr Cook took the opportunity to correct Governor McCusker’s comments from the previous week in his speech during the opening of the new term of Parliament.

“On this particular occasion, I am taking the opportunity to remind the Governor of our history,” said Mr Cook.

“Many people died in terms of the assertion of the new legal rights, which the British colony enforced upon the original inhabitants of this area.”

“Unless we come to terms with that, we will continue to repeat the injustices that were done at the time.”

Mr Cook went as far as citing some of the bloodshed – he referred to the Flying Foam Massacre on the Dampier Archipelago in 1868 and the subsequent civil strife which just about wiped out the Yaburara peoples of the Burrup. He also referred to the “Killing Times” in the Kimberley.

Factors that led to the Yaburara clashes and the massacre were the dispossession of their lands and the rape of an Aboriginal woman by a policeman. Mr Cook referred to the massacres in the Kimberley from 1888 onwards. This culminated in the death of Bunaba warrior Jandamarra who was pursued for years by violent settlers, police and Government. He and his fellow freedom fighters were killed when cornered. Mr Cook said that the massacres were Australia wide.

Governor McCusker had said how Australia came about “is the envy of the many.”

“Australia has one of the oldest democratic systems of government in the world, a system achieved without civil war or bloodshed, and which is the envy of many.”

Governor McCusker made the speech in the presence of two parliamentarian who are Aboriginal – Ben Wyatt and the newly elected Josie Farrer who only last week in her maiden speech to her parliamentary colleagues said that she had lived racism her whole life and on a daily basis.

Mr Cook said that the widespread massacres had to be acknowledged by all Australians if the nation was to progress united. Mr Cook said that Governor McCusker’s speech demonstrated a denial by some Australians, and was symptomatic of wider attitudes, “that blood was not shed in terms of the growth of this colony.”

“The moment we turn our back and pretend that those things do not exist, we will forever be a small-minded colony that continues to be based upon ignorance,” said Mr Cook.

“Roger Cook has to be commended for pointing this matter out and in the manner in which he did.”

In fact there were hundreds of massacres throughout Australia that cost tens of thousands of Aboriginal lives. Indeed, millions of Aboriginal peoples died or endured various oppressions, were victim to apartheid practices and to the atrocities committed by violent settlers and the institutional arms of the colonialist jurisdictions, by the Government troops and the police. Native police forces were created specifically to move on Aboriginal peoples. 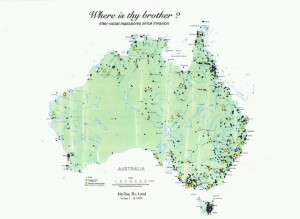 The map is from the book ‘Where is thy brother? : inter-racial massacres since invasion’. Originally published in Judith Monticone’s Healing the land : a closer look at needs of the Australian (re)conciliation movement, by Healing the Land 1999. – courtesy of treatyrepublic.org

A snapshot of Australian history in the 18th, 19th and 20th centuries

Massacres of Aboriginal peoples were often not recorded.

In 1790, Governor Arthur Phillip issued an order for a delegation “of two captains, two subalterns and forty privates, with a proper number of non-commissioned officers from the garrison to bring in six of those Natives who reside near the head of Botany Bay, or, if that number shall be found impracticable, to put that number to death.”

In 1804 the British massacred Aboriginal peoples at Risdon Cove, NSW. In 1816, another massacre took place along Cataract River, just south of Sydney. Governor Macquarie sent possies out against the Gundungurra and Dharawal peoples who had a problem with being dispossessed of their lands.

The Black War in Tasmania took place around the same time when violent settlers, whalers and sealers were bent on wiping out Aboriginal peoples who they saw as being in the way. Many describe what happened as an act of genocide. This atrocity culminated with 200 Aboriginal survivors rounded up and sent to Flinders Island.

Then there is the 1816 Appin massacre where on April 17 Government troops burnt the camps of the Dharawal people. The dead bodies were plunged over a cliff.

The Bathurst massacre in 1824 was alleged to have taken place over cattle being stolen. In 1828, 30 Pennemukeer Aboriginal peoples were killed during the Cape Grim massacre.

In 1830, the first official “punishment raid’ was led on Noongar people in what is Fremantle, led by Captain Irwin. An alleged theft of goods from a settler’s makeshift dwelling was met with retribution. Captain Irwin is quoted , “The tall savage who appeared the Chief showed unequivocal gestures of defiance and contempt.”

“This daring and hostile conduct of the Natives induced me to seize the opportunity to make them sensible to our superiority, by showing how severely we could retaliate their aggression.”

In 1883 the Convincing Ground massacre of Gundjitmajara people in Victoria led to 200 Aboriginal women and children being killed.

In 1834, in the Battle of Pinjarra in WA up to 160 Aboriginal people may have been killed despite official records stating only 14 deaths. In the subsequent years right throughout the South West of Western Australian Aboriginal peoples were slain.

In 1838, Sydney’s Waterloo Creek massacre, later known as Slaughterhouse Creek – and which occurred on January 26 – led to 50 Kamilaroi people killed.

In 1838, the Myall Creek massacre occurred. This was the first Aboriginal massacre for which some European settlers were successfully prosecuted.

In 1838, there were also the Broken River and Gwydir River massacres, the massacres at Bowman, Ebden and Yaldwyn stations.

In 1839, followed the Campaspse Plains massacre, the Murdering Gully massacre with the Djargud Wurrung people nearly wiped out. During the same period violence between European settlers and Wiradjuri around the Murrumbidgee River was ongoing and would last to the end of the century.

In the Victorian Gippsland massacres during the 1840s up to 1,000 Aboriginal peoples were indiscriminately killed.

On August 27, in Western Australia at Lake Minimup Captain John Molloy “gave special instructions that no woman or child should be killed, but that no mercy should be offered the men.  The bodies were lined up as a warning to others.

Settlers were also prone to poisoning Aboriginal peoples to death. Outside of Brisbane, in 1842, 60 Kabi Kabi died from eating flour laced with strychnine.

In 1842, at the Evans Head massacre, 100 Bundjalung people were killed.

In 1843, at the Warrigal Creek massacre up to 150 people were massacred. The Cape Otway, Balonne, and Condamine River massacres followed. The massacres of the Muruwari people at Hospital Creek followed, and then Brewarinna’s Butchers Tree, the Barwon River and the Narran River massacres.

In 1849, there were the Mount Gambier massacres. In 1857, there was the massacre of the Yeeman people.

In 1861, in the Central Highlands of Queensland, in October and November police and violent settlers killed 170 Aboriginal peoples.

In 1865, the La Grange expedition into the Kimberley led to the deaths of 20 Aboriginal people.

In 1867, in Central Queensland, the Goulbolba Hill massacre claimed the lives of men, women and children. Native Police and about 100 settlers killed 300 Aboriginal people.

In 1868, the Dampier Archipelago’s Flying Foam massacre led to the deaths of up to 150 Yaburara people.

In 1873, the Battle Camp massacre in far north Queensland wiped out many Aboriginal people, many of them would have met the settlers for the first time.

In 1875, the Blackfellow’s Creek massacre in far north Queensland cost scores of Aboriginal lives. An inquiry absolving the settlers and troopers would hear, “The niggers got a dressing there…”

In 1879, once again in far north Queensland at Cape Bedford more than 30 Guugu-Yimidhirr people were killed. An inquiry heard, “Both outlets were secured by the troopers. There twenty-eight men and thirteen gins thus enclosed, of whom none of the former escaped. Twenty-four were shot down on the beach and four swam out to the sea never to be seen again.”

In the 188os clashes were common in the Arnhem land between Yolgnu and settlers. There were several massacres.

In 1884 at the Battle Mountain near Mount Isa more than 200 Kalkadoon people were killed.

In 1887, in WA’s Halls Creek there were the massacres of Djara, Konejandi and Walmadjari peoples.

In 1890, there was the Speewah massacre of Djabugay people in far north Queensland by Native troopers.

In 1906 and 1907 the Canning Stock Route led to the deaths of many Aboriginal men, women and children and also the capture and enslaving of Martu peoples as guides for the trekkers to map out the Route. Women were raped. The Western Australian Government held an inquiry but exonerated the murderers and rapists.

In 1915 Kija people were massacred at Mistake Creek. In 1918, more than 100 Kaiadilt people were killed.

Then there were “The Killing Times” in the east Kimberley – between 1890 to 1926. The State Government had deployed a quarter of Western Australia’s police force in the Kimberley. Violence was used to dispossess Aboriginal peoples who were hounded by police and pastoralists. Hundreds were killed in the Derby and in the Fitzroy Crossing. Jandamarra was hunted down. There were scores of mass killings.

In 1924, at Bedford Downs, Gija and Worla men were tried in Wyndham for allegedly spearing a milking cow. After the court appearance vigilantes gave them dog tags and forced them to walk 200 kilometres back to Bedford Downs. When back they were forced to chop the wood that would later be used to burn their bodies – once they had finishing chopping the wood their strychnine laced food would kill most of them. Those who clung to life were clubbed to death. The bodies were burned by the local police.

In 1926, the Forrest River massacre in the east Kimberley cost scores of lives.

In 1928, the Northern Territory’s Coniston massacre cost 32 Aboriginal lives – one Great War veteran shot them. One of the survivors was Billy Stockman Tjapaltjarri, who became a famous Papunya painting man – his mother had hidden him in an acoolamon (a carrying vessel). An inquiry stated the murders were justified.