The joke on First Peoples – “Go straight to jail” 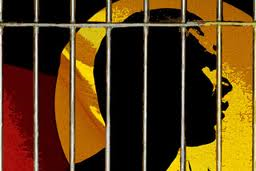 Because I am also a researcher I knew this, and it is frustrating to read reports from various high offices that numbers are stagnating or improving when I know they are not improving. The latest annual reporting from the Australian Bureau of Statistics on Australians prisons proved that everything is not just worse but much worse.

How long is this sick joke on First Peoples going to continue? How long are we to accept this appalling narrative of jailing this continent’s First Peoples at among the highest rates in the world, but in the everyday knowledge that Australia is the world’s 12th largest economy and 2nd wealthiest nation per capita? How much longer are we going to accept redneck Western Australian policies ensuring a jailing rate of First People adult males that at this very moment sees one in 13 of all of Western Australia’s First People adult males in prison?

As of June this year, the Australian prison population reached 33,791, when only less than 18 months ago there was boasting that it had fallen to just under 30,000 from nearly 31,000 the previous year but I knew that was a problematic assertion. In the last year alone there has been an increase of more than 13 per cent in the total prison population. Both male and female prison populations have significantly increased and of course the overwhelming disproportionate burden is with First Peoples.

The national imprisonment rate is at 185.6 per 100,000 adult Australians. But in Western Australia Aboriginal adult males are imprisoned at nearly 4,000 per 100,000 Aboriginal and/or Torres Strait Islander population. Tragically, 27 per cent of the total prison population is comprised of First Peoples.

Ten years ago there were 5048 First Peoples in prison but this figure ten years later stands at 9264 – an 86 per cent jump. I have previously written of how the Australian prison population will look like in 2025, only effectively ten years away – just over half of it will comprise First Peoples. The sick joke continues.

My own disaggregations have the national rate of First Peoples adults in prison at 1 in 33 of every Aboriginal and Torres Strait Islander adult on the continent. Is this not racialised imprisonment? And in South Australia, the Northern Territory and Western Australia the rates are abominably higher, with Western Australia the worst. There is a general premise that is true; the more west we go across the continent the worse it gets for First Peoples – with poverty, its extensiveness, extreme poverty, homelessness, racism, arrest rates, jailing rates, suicide rates, premature deaths and life expectancy.

Chair of the Aboriginal and Torres Strait Islander Legal Service (ATSIL), Shane Duffy stated the obvious, “The tough on crime polices have failed.”

Mr Duffy said Governments have to address “social and economic poverty” and it will take “a completely different way and to realise that putting money into the prison system is not the way to deal with things.”

He said that Justice Reinvestment has to be given a real shot, and support programs like Throughcare, where counsellors work “with the hardest of the hard” criminals is a way forward. It is about not giving up on people and turning them around. More than 60 per cent of the prison population are reoffenders.

A recent Productivity Commission report outlined that the Government funding cuts to frontline services had affected legal services and support programs such as Throughcare. Let us expect things to get worse. There are no real budgetary savings because as the prison population increases so does that already enormous Corrective Services budget.

Australian Human Rights Commission Social Justice Commissioner, Mick Gooda said that Government “needs to adopt justice targets in the efforts to address the overrepresentation of Aboriginal and Torres Strait Islander people in the criminal justice system.” But how many targets do we already have that are not closing? It will take more than just ‘targets’.

Mr Gooda, an advocate for Justice Reinvestment, said “Indigenous incarceration rates are one of the most urgent human rights issues facing Australia.”