The Great War, the Great Lie – all about greed 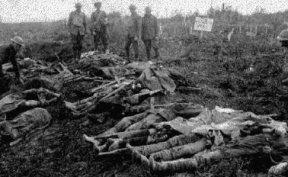 Freedom of Information searches are near meaningless as they are nevertheless manufactured and packaged information.

We celebrate the sacrifices of millions of human beings in the deplorable human tragedy of war.

The Great War – 1914-18 – took young and old lives. We remember the loss of life, the sacrifice of many in the context of the hugest lie – nationalism.

Parochialism reduces human beings to servitude. Lives were sacrificed arguably for the preservation of sovereign asks – to protect nationhood, to protect the British Empire. Did Gavrilo Princip really trigger the Great War?

The death of Archduke Ferdinand was a ruse.

The Ottoman Empire was waning, in huge financial debts to European bankers. The multinationals and bankers, the citadel of the elite powerbrokers, were chomping at the bit to control existing oil fields with exclusivity and to secure potential oil fields in Mesopotamia. There was an energy crisis in the lead up to the Great War, and the industrial and technological revolutions, the cash cows of the multinationals, needed energy to continue commercialising the spoils of the technological revolutions to continue scoring their quid.

The Germans had been building a railway line from Berlin to Mesopotamia and to the Persian Gulf – through Europe and the Ottoman Empire. The oilfields would become part of the German Empire. The British knew they could defeat the Germans and the Ottomans. That is the powerbrokers, influence peddlers, the citadel of the rulers of the British Empire – the multinationals knew that the Germans and Ottomans could be defeated. This would translate to a monopolising of resources.

When we remember the Great War as a defining moment of Australian nationhood we are misled. We should be remembering the Great War as the Great Lie and the evil hoax that led to 37 million casualties. In a sense it was genocide, a holocaust of human lives orchestrated by individuals who wanted the profits they could make from oil fields. Some would suggest that they helped along the technological revolutions but that is rubbish.

European powers had long been bent by the sickness to dehumanise peoples in other parts of the world, to turn them into colonies and pillage their resources. Plutocrats behind the hoodwink of capitalist economies brutally engage in taking control of resources from wherever without regard for the slaughter of human life and subsequent narratives of human misery and suffering.

When I discuss the indenture of humanity do not scoff – remember only the recent past where millions of human beings were hunted down, captured and shipped as slaves to the Americas. Slavery was maintained with a savagery the likes many would never presume capable of human beings. Sacrificing human life in wars taps into that same disposition for the savagery that oppressed people as slaves. It will take the most meticulous anti-greed laws to reduce corruption, the savagery, the lot.

Humanity has always been undermined by the disposition for cruelty. When the British abolished slavery they did not compensate the former slaves but instead their former owners! This says it all.

Australian soldiers, part of the light horse regiments, were lost in the battlefields of the then Ottoman dominions, Palestine and Mesopotamia. They were not defending Australian nationhood which itself came at the expense of millions of the First Peoples they stole lands from, nor were they defending Britannia and the propaganda that Britannia was having a ‘civilising’ effect on the rest of the world. They lost their lives for those multinational robber barons who sought to secure and profit from Mesopotamian oil – blood for oil.

Two years after the end of the Great War, Winston Churchill ordered the bombing of toxic gas from planes on Iraqis who were uprising. Let us not forget what the CIA did to Persia/Iran during the 1950s, overthrowing the government to help along the oil companies of the foreign robber barons.

It was Winston Churchill who campaigned for the British Navy to switch from coal to oil.

BP – British Petroleum – is one of the world’s six major oil and gas companies. BP has operations in 90 countries, producing nearly three and half million barrels of oil per day. BP’s was founded in the Anglo-Persian Oil Company in 1908 as a subsidiary of the Burmah Oil Company. It was set up to secure oil discovered in Persia (Iran). Today BP has many joint venture partners, including Russia’s TNK-BP.

In 1908, British geologists discovered oil at Masjid-i-Suleiman in Persia. It was the first major find of oil in the region and heralded interest in the whole region as a potential oil reserve. The first chairperson and shareholder of the company was Lord Strathcona. The Abadan refinery was built in 1912 and the British helped it along with a 50.0025 per cent controlling interest. Winston Churchill switched the British Navy from coal power to oil. Subsidiary companies came one after the other in the immediate years.

The so-called great World War Two British Prime Minister, Winston Churchill did the bidding of the multinationals robber barons. Following the end of the second world war, the Middle East’s people had their own nationalist sentiments. In Iran, the pro-western Prime Minister Ali Razmara was assassinated for refusing to stand up to the unequal terms of the now Anglo-Iranian petroleum company (changing names in 1935). The nationalist Mohammed Mossadeq was elected prime minister. The naïve Mossadeq led government nationalised the Iranian oil industry. The British government contested the decision in the International Court of Justice. The Court dismissed their complaint. That lobbyist for the robber barons, Winston Churchill, asked both US President Dwight Eisenhower and the CIA to overthrow Mossadeq. The CIA orchestrated the overthrow – codename ‘Operation Ajax’. The British MI6 codenamed their role as ‘Operation Boot’. These scoundrels staged the coup in August 1953. Mossadeq was dusted and replaced by in a coup d’etat by the puppet Fazlollah Zahedi. In 1951, the Iranian government had voted unanimously to nationalise the oil reserves. The International Court of Justice dismissed the British bleating. In 1953, BP returned to Iran.

In 1914, Armenian entrepreneur Calouste Gulbenkian teamed with the Anglo-Persian oil company to explore Mesopotamia for oil. They knew the region must be rich in oil. The power struggle for who owns what in energy resources has intensified every year in the last one hundred years.

The Berlin-Baghdad railway was instrumental in bringing about the robber barons to encourage a war on German and Ottoman Empires. The Germans wanted to establish a port in the Persian Gulf. At the outbreak of the Great War the railway line was still 960 kms from completion. Had the railway been completed the Germans would have access to the potential Mesopotamian oil reserves. The Germans would not be at the whim of British and French interests controlling the Suez Canal.

Had the Germans completed the railway they would have been able transport and trade freely through a Persian Gulf port. They would have direct access to oil reserves.

The British always knew they would win the Great War. Winston Churchill knew this. The robber barons he would lobby for knew this. It was a matter of how many lives would be sacrificed. But the multinationals could work over government to use the British people and the people of the so-called British Empire – such as Australians and New Zealanders – to be turned into armies. There is little to be proud in remembering the Great War, there should much be to be angry with.

The railway line would have strengthened the German and Ottoman Empires but more importantly their robber barons who would compete with the Anglo based multinational robber barons. In the greed wars everything is fair game, so their twisted minds believe.

In the propaganda wars publicly some British media first talked up the railway line and secret cabinet papers were moderated to pretend they were about the ‘national interest’. Underneath all this the robber barons ruled the roost.

The British government exercised pressure on the Baghdad Railway Company forcing them to sign a contract on February 23, 1914 about the use of the railway line. In March 1914, the German government conceded a ‘recognition’ that southern Mesopotamia in addition to the oil reserves in Persia were the exclusive preserve of the Anglo-Persian oil company (BP).

In June 1914 an agreement between the Germans and the British was formalised on the exclusive rights of the British in the Mesopotamian region.

British cabinet papers released years later recorded that an agreement between the Ottoman government and the British was on the following terms, “Two British representatives approved by HMG should be admitted to the Board of the Baghdad Railway Company.”

“The terminus of the railway should be at Basra.”

“No railway should be constructed from Basra to the Gulf without the sanction of the HMG.”

On June 15, 2014, five weeks from the outbreak of the Great War, the British reached an agreement with the Germans – on paper. The issue was not resolved as the Germans and Ottomans signed a secret alliance on August 2, one day after the presumption of war on August 1.

It was during the Great War, that in fact the Germans were denied access to Mesopotamia. The British military took Iraq. Following the Great War, the Treaty of Versailles removed any prospect of German ownership of the Baghdad railway. Control replaced any need for agreements.

On June 28, 1914, Gavrilo Princip assassinated Franz Ferdinand. On July 28, Austria-Hungary declared war on Serbia. On August 2, 1914, the Germans and Ottomans signed a secret treaty of alliance. The Triple Entente was signed between the United Kingdom, France and the Russian Empire. More than 60 million Europeans were assembled as military personnel and ten million people from the ‘colonies’. This mobilisation of people was the largest of its kind to that date. The trigger for the war was not the assassination of Franz Ferdinand – how ludicrous is this propaganda? The ultimatum by Austria-Hungary to Serbia was an excuse.

The trigger for this Great War was greed.