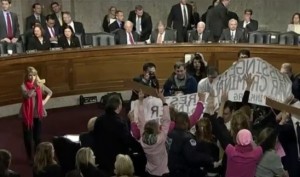 February 15, 2015 After a week here in FMC Lexington Satellite camp, a federal prison in Kentucky, I started catching up on national and international news via back issues of USA Today available in the prison library, and an “In Brief” item, on p. 2A of the Jan. 30 weekend edition, caught my eye. It briefly described a protest in Washington, D.C., in which members of the antiwar group “Code Pink” interrupted a U.S. Senate Armed Services budget hearing chaired by Senator John McCain. The protesters approached a witness table where Henry Kissinger, Madeleine Albright and George Schulz were seated. One of their signs called Henry Kissinger a war criminal. “McCain,” the article continued, “blurted out, ‘Get out of here, you low-life scum.'”

At mail call, a week ago, I received Richard Clarke’s novel, The Sting of the Drone, (May 2014, St. Martin’s Press), about characters involved in developing and launching drone attacks. I’m in prison for protesting drone warfare, so a kind friend ordered it for me. The author, a former “National Coordinator for Security and Counterterrorism,” worked for 30 years inside the U.S. government but seems to have greater respect than some within government for concerned people outside of it. He seems also to feel some respect for people outside our borders.

He develops, I think, a fair-minded approach toward evaluating drone warfare given his acceptance that wars and assassinations are sometimes necessary. (I don’t share that premise). Several characters in the novel, including members of a House Permanent Select Committee on Intelligence, criticize drone warfare, noting that in spite of high level, expensive reconnaissance, drone attacks still kill civilians, alienating people the U.S. ostensibly wants to turn away from terrorism.

Elsewhere in the plot, U.S. citizens face acute questions after they themselves witness remote control attacks on colleagues. Standing outside a Las Vegas home engulfed in flames, and frustrated by his inability to protect or save a colleague and his family, one main character ruefully identifies with people experiencing the same rage and grief, in faraway lands like Afghanistan and Pakistan, when they are struck by Predator drones that he operates every day. U.S. characters courageously grapple with more nuanced answers to questions such as, “Who are the terrorists?” and “Who are the murderers?” As the plot accelerates toward a potential terrorist attack against railway systems in U.S. cities, with growing suspicion that the attacks are planned for Christmas Day, Clarke builds awareness that those who launch cyber-attacks and drone attacks, no matter which side claims their loyalty, passionately believe their attacks will protect people on their own side.

When U.S. media and U.S. government officials ask, “who are the murderers,” the default answer is enemy soldiers. I’m reminded of Senator McCain’s own response to a 2012 prisoner exchange of five Afghan militants, where he was alleged to have exclaimed, “They’re the five biggest murderers in world history! They killed Americans!”

It brings home a core fact about drones: that you can’t surrender to a drone. Enemy soldiers, and people merely suspected of being, or intending to become, enemy soldiers, are killed at home gardening, or eating dinner with their families. At the military base where I was arrested, soldiers drive home every evening from piloting drones in lethal sorties over Afghanistan, Iraq, and presumably a sizable list of other countries less well known to the U.S. public. With no overwhelming zeal to kill civilians, they assist the U.S. in killing many more civilians each year than Al Quaeda and ISIS can collectively dream of doing, in the course of advancing U.S. interests over a whole world region U.S. drones render into one large battlefield. No thinking person would wish that same logic to be visited on these soldiers returning home from daily battle, although Clarke’s novel chillingly imagines the U.S.’ own technology and rules of engagement turned against it. It’s a warning we’re too prone to ignore.

In Clarke’s novel, the U.S. drone operators and intelligence officials are smart, efficient, generally honest, caring and often funny. Romance and occasional flings color their lives. The two masterminds of the enemy plot in contrast, are more mysterious. Readers learn almost nothing about their personal lives, although it’s clear that they don’t expect to live much longer. They, too show remarkable expertise exploring high-tech ways to achieve goals. They, too, are clever and terrifyingly competent; personal loss and deeply felt grievances motivate them; like their counterparts, they’ve moved into high positions with increasing wealth and perks. But, unlike the U.S. characters, they express no remorse or second thoughts about killing their targets and strategizing for a major attack.

The fact remains that if we didn’t see enemy soldiers as “murdering terrorists” lacking the human emotions and rights of our own troops, and enemy civilians as “collateral damage” whose deaths are automatically the fault of all who resist us, then there couldn’t be a drone program. There wouldn’t be a technology for eliminating human threats and human obstacles conveniently, cheaply, and instantly from the skies. We would no longer be killing militants and suspected militants unquestioned, too often at the first hint that they might pose a risk to us.

The “means-ends” question intensifies as both sides demonstrate increasingly high-tech ways to thwart and attack each other. One intelligence officer asks how his superior manages to draw the line between what is acceptable and what would be out of bounds when he issues orders that will “take out” presumed enemies.

“It used to be the ‘Front Page Rule,'” the higher official responds. “Assume it will be on the front page of the Post someday and only do it if you could stand that level of exposure. But it’s amazing what has been on the front page without any real consequences: torture, illegal wiretaps, black sites. No one goes to jail. No one gets fired. So I don’t know anymore.”

When Clarke invokes the “Front Page Rule, it seems to be his acknowledgement that peace protesters like those of Code Pink play a valuable role informing public opinion. Believing that the means you use determines the end you get, they hold out for alternatives to war and killing. Far from being low-life scum, they have distinguished themselves in fields of diplomacy, research, journalism, law and education. More than this, they are distinguishing themselves in service to the victims of war.

I hope that someday Senator McCain will gain the insight to repent of insulting them, just as one of the witnesses that day, former Secretary of State Madeleine Albright, may now regret having exalted the “indispensable” U.S. nation’s right to lead in using force, having since admitted, “We have been talking about our exceptionalism during the recent eight years. Now, an average American wants to stay at home – they do not need any overseas adventures. We do not need new enemies.”

Militarists trust in weapon strength. Still, though perennially disregarded, another option is readily available, offering much greater safety and letting us insist without self-deception on the respect for life that we invoke in defense of our nation’s drone strategy and its war on terror. It’s the option of treating other people fairly and justly, of trying to share resources equitably, even that precious resource of safety; of trying to see the humanity of our so-called enemies and of seeing ourselves as we’re seen by them.

Clarke’s story moves toward a suspenseful conclusion at the height of the Christmas season, ironically moving toward a day traditionally set aside to herald a newborn as the Prince of Peace. As drone warfare proliferates, as the stings of the drone become more lethal and terrifying, the peace activists hold a newsworthy message. I’m glad Code Pink members continually interrupt high level hearings. I hope their essential questioning will plant seeds that germinate, take root and gather underground strength.

This article first appeared on Telesur.