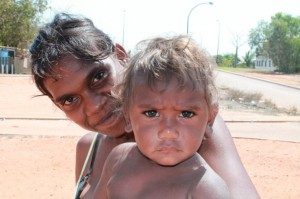 This child of the Kimberley region of Australia could well ask what future lays ahead for me – Photo, Gerry Georgatos

Whereas it was reported by the Australian Bureau of Statistics that for the period 2000 to 2010 one in 24 of all Aboriginal and Torres Strait Islander deaths were by suicide, in the period since this rate has increased to one in 20. The suicide rate is even higher than is reported. But this already high frequency of reported suicide as a cause of death has a traumatic effect on peoples who already endure a disproportionately overwhelming burden of bereavement stress because of the high rate of premature and unnatural deaths. In some communities, life expectancy is thirty years lower than the national average and one in three of their people are dead by 45 years of age. Child mortality rates are double and triple the national average.

One in 20 of all deaths by suicide is a phenomenally high rate and bespeaks of community distress, identity crises and a contagion of unhappiness. The one in 20 suicide death rate is a disproportionately high rate but it is also clearly lower than what it really is. Because of various classifications dependent on findings, because of reporting failures, because of jurisdictional differences in coronial processes and of the various uncertainties at familial, community and police levels in aggregating evidence as to the cause of death, I estimate that the suicide rate among Aboriginal and/or Torres Strait Islander peoples is more likely double – but previously I have estimated one in 12.

The Queensland Aboriginal and/or Torres Strait Islander suicide rate peaked around the end of the century, then dropped and then reached near its peak levels in 2001 and 2002 and has decreased slightly since. The Western Australian Aboriginal and/or Torres Strait Islander suicide rate was significantly high in 1998, higher than most of the jurisdictional and regional rates around the nation at the time and of many currently. But the higher than usual rate increased every year to 2006, by which time it had doubled. Subsequent the spike in 2006, the rate began to decrease but never falling below the 1998 rate. In recent years the rate has increased again, with 2011 reaching close to the 2006 rate. Therefore, Western Australia is the worst of the suicide crisis among the descendants of the First Peoples, although the Northern Territory tragically competes with Western Australia. But why is it that these two jurisdictions with half the Aboriginal and/or Torres Strait Islander populations of Queensland and NSW are faring so badly?

Australia cannot continue turning a blind eye and deaf ear to these catastrophic suicide and self-harm rates. We were not put on this earth to bury our children – but we do. We were not put on this earth to betray one another – but we do. I will continue with my mantra – that there are no greater legacies any Government can own than to help first its most vulnerable, to improve lives to the point that lives are saved. Governments will fail in many of their prescribed and intended objectives but the one objective they must not fail at is in the saving of lives. The saving of lives must be at the top of the national agenda. When it is, lives shall be saved and we shall all be the better for it.