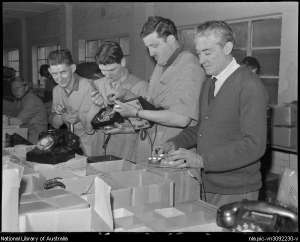 We used to call them sheltered workshops.

That’s a thing of the past – they’re now branded as ‘Australian Disability Enterprises’, places where people with disability are routinely placed and where you can earn as little as $1.79 an hour. A kinder term, but ‘lipstick on a pig’ in the eyes of many. Workers are scaled by ‘productivity scaling’ – despite the fact that the government’s own productivity scaling tool (BSWAT) was declared discriminatory and illegal last year, productivity scaling in different forms continues in sheltered workshops around Australia. Sheltered workshops using the BSWAT tool have three years to stop using it, but their employees, or ‘participants’, are routinely paid far below the minimum wage.

That’s the picture in Australia, not in countries like the UK. In England, a social enterprise approach is used, where the organisation trades in the market and takes on a degree of business risk, as well as receiving a subsidy in compensation for possible reduced productivity of disadvantaged workers in order to allow it to compete on a level playing field with conventional organisations. Workers are paid the minimum legal wage, £6.50 ($11.80 AUD).

But a scandal hit the UK yesterday, where a welfare reform minister offered a ‘full and unreserved apology’ after information was leaked that he told a conference that some disabled people were ‘not worth’ the minimum wage. He faced immediate censure from charities, disabled persons groups and the Prime Minister and offered an immediate apology. From a news report;

“You make a really good point about the disabled. There is a group where actually, as you say, they’re not worth the full wage,” Freud said. “…without distorting the whole thing, which actually if someone wants to work for £2 an hour, and it’s working can we actually…”

In a statement issued by the Department for Work and Pensions, Freud said: “I would like to offer a full and unreserved apology. I was foolish to accept the premise of the question. To be clear, all disabled people should be paid at least the minimum wage, without exception, and I accept that it is offensive to suggest anything else.’

An outraged Downing Street distanced itself from the minister by saying there could be no exceptions to the minimum wage. The Prime Minister said, “Of course disabled people should be paid the minimum wage and the minimum wage under this government is going up and going up in real terms. It is now at £6.50. We will be presenting our evidence to the low pay commission, calling for another real-terms increase in the minimum wage.”

A scandal because a politician holds views that people with disability should be paid under the minimum wage? But our country does that every day!

Two pounds an hour – well over double what Australia legally pays people with disability working in Australian Disability Enterprises – is a cause for national outrage in Britain, but causes barely a murmur in Australia. We speak with disdain about Indian sweatshops, but buy the shoes that disabled workers have packed and paired at Kmart with nary a word. We segregate people with disability into ‘special’ employment settings and exploit them financially, with a menu of work options that generally include menial, tedious and repetitive work. And we use meaningless phrases to validate our abrogation of our responsibilities – ‘dignity of work’ to justify paying people a few dollars an hour, ‘Australian Disability Enterprise’ instead of sheltered workshop.

So what does that look like for people with disability in Australia, where those with a disability earn wages equivalent to those paid in third world countries?

I sat next to a man last night who struck up a conversation with me. He was intelligent, casually dressed, personable. I did not know that he had a disability until he told me. And eventually the conversation turned to his past employment, which included a stint in a sheltered workshop, being paid $2.50 per hour.

“The worst kind of work. The most boring stuff you could imagine, and people have worked there for years. No wonder they are bored and unproductive – who in the real world has the same job for forty years?”

That view is reinforced by disability rights organisations, who say that packing goods, pairing shoes and sorting recycled clothes for decades in an ADE is isolating, financially exploitative and does not allow people to be able to progress in employment in the same way others do.

“[W]hen individuals with disabilities spend years — indeed, decades —in congregate programs doing so-called jobs like these, yet do not learn any real vocational skills, we should not lightly conclude that it is the disability that is the problem. Rather, the programs’ failure to teach any significant, job-market-relevant skills leaves their clients stuck. As a recent review of the literature concludes, “[t]he ineffectiveness of sheltered workshops for helping individuals progress to competitive employment is well established.”

A 2011 report – “Segregated and Exploited: The Failure of the Disability Service System to Provide Quality Work.” – argues that people with disability have the right to spend their lives in the most integrated setting appropriate for them as individuals and that this could just as sensibly be applied to the employment setting.

A full and equal life in the community can’t be achieved without a meaningful, integrated way to spend the day.

All of this means nothing without listening to the stories and understanding that this is about real life for a community of Australians, who deserve to be afforded the same basic human rights as other Australians.

I hear them every day, those stories. Not just from people with disability – from their families and government and from those who run sheltered workshop operations. I can see the competing interests and the frustrations and understand the tensions. That does not abrogate our responsibility to treat people with disability as equal citizens with workers’ rights.

‘I earn $4.33 per hour, and I’ve worked there for over ten years. If you are working there, you are not legally allowed to apply for another job until you quit that one.’ – a sheltered workshop employee in WA

‘They have separate lunchrooms, the employees and the staff…that’s what they call them. The staff are the people who don’t have a disability. They started calling the employees that when someone made a complaint about the word ‘participants’, but they still get paid less than half the basic wage.’ – a staff member at a sheltered workshop in Queensland

‘In some places, they pick up the workers and drop them off in buses, and they take the transport costs out of their wages.’ – a South Australian disability advocate

‘He likes his friends there. He’s been there for twenty two years and likes going to work. I’m sixty now and I can’t look after him all day. He’s never had any funding – I don’t know what I would do if he was not at work.’ – a mother of a forty year old man with an intellectual disability

‘I can’t buy a house and I can’t earn too much money because I will lose my pension if I do. And I can’t move out or rent or do anything, really. I can’t buy my mother a birthday present.’ – a sheltered workshop employee

‘She’s too disabled to work anywhere. She doesn’t work, really. I can’t imagine her doing anything else’ – parent of a young woman with a ‘severe and profound’ intellectual disability

‘He worked as a swimming teacher at (a therapy clinic). They passed him around in the pool to learn how to handle young people with cerebral palsy, and he knew the difference between when he was in the pool recreationally or when he was at work – he would hold himself differently. He was paid award, casual rates.’ – parent of a young man with spastic quadruplegic cerebral palsy, a ‘severe and profound’ intellectual disability and a vision impairment

‘The average job tenure in Australia is about seven years – in Portugal, it is almost thirteen years.’ – OECD.Stat; Australia at Work W1 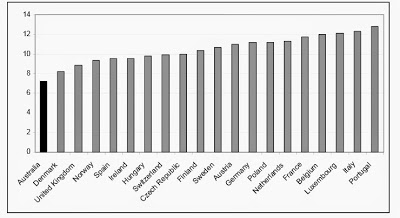 Image description – a graph that shows that Australia has the lowest of a range of countries for job duration.

‘They gave me an award when I had been there for twenty five years and they said it was like I was one of the family.’ – a sheltered workshop employee 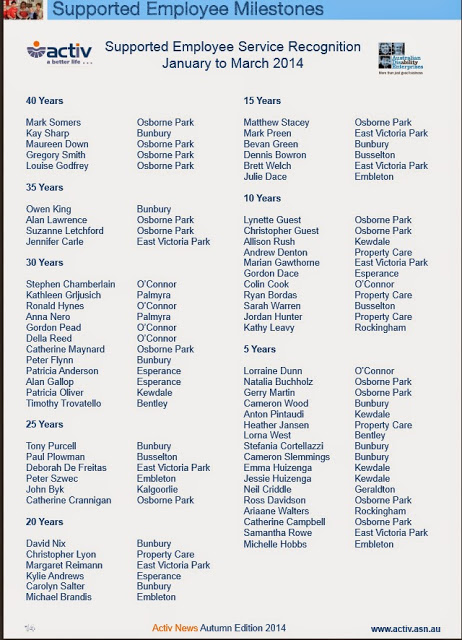 Image description – a page from the Activ newsletter which provides a list of ‘Supported Employee Service Recognition, January to March 2014’ Many of the employees have been working for over thirty or forty years.

‘The NDIS is a great welfare reform, but the elephant in the room is that it is not tied to bricks and mortar. The NSW government has withdrawn from providing residential accommodation for people with disability. Without people being able to work for a normal wage so they can pay rent or save like others do, there is a great risk of homelessness or further disadvantage…it’s hard to be supported well when you are living on the street.’ – a NSW disability advocate

‘It is a mistake to isolate the hourly rate of a supported employee as the only benefit they receive….they are given the opportunity to experience the dignity of work and to socialise with peers.’ – Mitch Fifield, Assistant Minister for Social Services and Manager of Government Business in the Senate.

‘I wonder if anyone has told the people working in overseas sweatshops that they have the ‘dignity of work’. Or that they’re ‘respite’ for the family.’ – a WA disability advocate

‘They were better, more honest, when they called them ‘sheltered workshops’, I thought. At least then they were regarded as a stepping stone to employment, somewhere you could get ‘ready’ or get ‘trained’ for work and try a variety of different kinds of work that would suit your skills and employment aspirations – now you’re stuck there forever.’ – a long term employee at a sheltered workshop in WA

‘He is paid $4.79 an hour, and after extracting administration fees and insurance premiums, he is left with $5.49 per annum in his super fund – who else would be happy with that?’ – parent of a young man working in a sheltered workshop 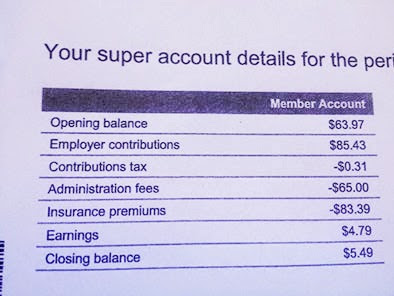 Image description – A screenshot of a workers super account details, which show payments of $65 in administration fees, insurance premiums of $83.39 and a closing balance of $5.49.
Is it possible, shutting sheltered workshops and moving people to integrated employment within the general workforce? Without a doubt. In the US state of Vermont, a quiet revolution has been taking place. The abolition of sheltered workshops has seen more than a third of Vermont’s disabled citizens employed, with average pay rates more than $2 above the federal minimum wage. All that is needed is a change in attitude and a collective will to make it work.

At the heart of it all lies the great dilemma – that treating people as second, or third, or fourth class citizens suits our agenda. We do not have to pay for people’s disability care and support when they are at ‘work’, and it is easier to segregate and isolate and exploit people than to change cultures and environments so that people can enter mainstream, competitive employment. They are out of the way, and happy – they love their ‘mates’, they’ve worked alongside them for twenty or thirty or forty years. And at the end of the day – our shoes are cheaper when we buy them from Kmart.

People with Disability Australia are running a wage justice campaign around this topic. You can read about it here: