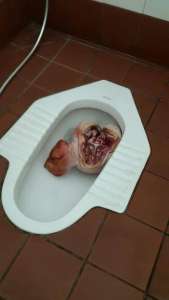 By now all of you would have read about the head of the pig that was left at the UWA Mosque toilets. The Stringer broke this news yesterday and most of the mainstream media has picked up and run with it. I have spent some time reading through the variety of news Facebook sites and have been absolutely amazed at the hate, bigotry and downright religious vilification that my fellow Australians are demonstrating. I have written before about the surfacing of racist and racial tensions every time some “event” occurs here or overseas in Australia. Whatever way we look at this issue of what transpired at UWA there is no excuse for the occurrence. Whether this is an act of “Racism” or an act of “religious bigotry” is immaterial except at the level of court action. The fact is that what did happen is unacceptable and cannot exist in a humane, caring society that celebrates the cultural norms of the various groups that comprise it.

However, what probably hurts most now is to examine the reaction of some of our gutless keyboard warriors around the place. I am reproducing below the comments off the Facebook page of the Channel Nine News accessible here: I have not reproduced the names of the people posting because often they thrive on the notoriety afforded them. I will ask if you wish to be disgusted have a look at the posts and if there are people there posting this rubbish feel free to “unfriend” them or let them know your thoughts.

These are the comments from the Nine News Facebook site:

Why is there a Mosque at UWA?

How disgusting. Truly shamed to be Western Australian right now. To disrespect any faith is an act of a low person. To the attendees of this mosque – I am sorry someone would treat your place of worship like this.

See in Australia we Laugh, throw it in the bin and carry on.!!

Your reporting is terrible, “a racially motivated attack” last time I checked Muslims and Islam were a religion not a race.

I’m surprised a pig would have lowered itself to use a mosque shitter.

Is uwa funded by muslims? I dont know any other reason they would fund it. We barely support Christianity in the country which is supposedly built on Christian values yet there are so many muslim places of worship all over perth.

My Question is the same as Denise Parker why is there a Mosque@ UWA ?

So beheading is not a deplorable act?

Why is there a mosque let alone a custom toilet to appease to these animals.

Just saw the photos in some countries the pigs head is a delicacy.

What are you sorry for? The pig that was killed, the toilet, Islam or UWA? I think it’s all about UWA having more students. There is going to be The Australian Islamic Party very soon and I’m sorry for this country.

They were going to call the cops but you know Pigs again.

Why is there even a mosque at UWA?

The juvenile who did this does understand that while Muslims don’t eat pork, it’s not like pork repels them with magical wizard powers or something. So basically this is stupid and the only motivation behind it was to try and cause offence, which is n…See More.

Bigotry is alive and well in wa I see.

What about Muslims demanding that we take down.. the cross at Christian churches and stop displaying the nativity scenes. That’s offensive to many. That’s what we should be concerned about not a pigs head.

Woah this comment section really is a fantastic way to round up the uneducated racists of Perth!

Dumping a “whole” pigs head in a toilet hey? That woulda really hurt coming out, shoulda chewed their food better!

Why your at UWA learning, learn what Christianity values did to us indigenous Australians, how many beheading, skinnings and stolen body parts are laying all over Britain and private collectors then rant on abt Islam, Muslim rights and wrongs at your precious UWA.

It is a disgusting act. It does however pale into insignificance the burning down of Churches and Synagogues in Muslim Countries.

Hang it near the door instead.

Lol, deplorable? Someone get that man a bacon sarnie and a cold one.

That’s not a toilet, hang on. oh it is a toilet.

If it were a lambs head in a Catholic Church it wouldn’t make they news….See More.

Shame on those who did this SMH what’s wrong with Perth, what happened to us?

Think someone is trying to send them a Message ?

Pigs deserve better than this.

The very last place on earth where I would maybe then find hate is Perth, looks like it’s starting…

wow the level of education and knowledge on this thread !! Reclaim your literacy I suggest.

Better than cutting off someone’s head in the street.

Well!! I think we know where the majority of real Australians sit with this one!

good on em whoever they wore well done.

Need more of it!

I hope they catch who done this, and make an example of him, and send him to jail.

Remind me again what race this was targeting?

Why is there a mosque there, is there a room for Sihks to pray, for Jews, for Buddhists, for Hindus ? And again media, Islam is not a race.

what one big messed up world we are living in….whats got to give in this world???

I though people’s get education in University’s? after reading this they proved me wrong.

Do is there the equivalent for every other religion or are they special?

You come to Australia you follow our region pretty simple we go to another country we are expected to follow their region like it or hate it that’s just how it is.

Who ever done this should be our PM, I’ll buy ya a bacon burger if I ever meet ya mate.

some truck driver in the uk had to.put pork joints on the handles of the back of his truck to stop the illegal.immigrants in calais from breaking into his truck.

Who ever done this deserves a high five!! Haha champion.

what were we talking about yesterday morning haha.

Very disgusting ,, how could someone do that ,,,, we shouldn’t be having this stuff happening in Perth.

That’s not the way to make peace.

Stupid place to put it really.

Well done who ever done it.

What a waste of BRAWN.

Haha good on ya boys.

Damian Walker this was you wasnt it.