The choice is clear – Nationalism versus Aboriginality 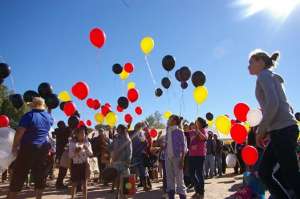 So here we are NAIDOC Week for 2014 and the theme is: Serving Country: Centenary & Beyond in honour of all Aboriginal and Torres Strait Islander men and women who have fought in defence of country.

I remember reading this when it was first announced and thinking to myself, really? I hope those frontier warriors, Pemulwuy, Yagan, Windradyne, Dundalli and others get as much recognition this week as the servicemen and woman who fought in wars outside of Australia.

This is quite a push towards Australian nationalism for our mob where NAIDOC for me was always about our unique survival and celebration, who we are and what we represent as Blackfellas. If this is a concerted push towards nationalism then this week’s NAIDOC is a real concern regarding our own Cultural and intellectual independence.

You see the very definition of nationalism asserts that as a nation you promote the Cultural unity of all one nation over and beyond your own ethno-national identity that means you are Australian above all else whether you are Aboriginal, Greek, Italian, Maori or whatever ethnicity you represent.

To put our Aboriginality behind our Australian identity is an extremely dangerous practice considering the current environment where we are having to fight for our Cultural practices against unprecedented attacks against our identity, including from some of our own mob.

Scholars such as Hans Kohn have demonstrated how in the United States we have witnessed this same government institutionalised civic nationalism, where identity is based on legal and emotional concepts of citizenship, a common language and Cultural traditions, rather than an individual’s own ethnic nationalism.

In the West, countries are founded under classical liberal principles of governance, rather than ethnic nationalist principles of individual identities and Cultures. Again, you are either with us or against us. Particularly since World War I and then again in the 1960s and 1970s we witnessed a history and education that focuses identity towards Western countries’ founders and constitution basically wiping out the Cultural history of prior Indigenous peoples who were there before them.

This is because war, patriotism and nationalism are used as emotional devices to build identity, which again develops a real concern over this week’s NAIDOC celebrations. So much so I decided to have a look at the themes of NAIDOC since it was first established in 1972 and there is definitely a trend where we see our own fight for recognition and civil and human rights, which is very evident throughout the 70s, 80s and 90s, start to become watered down over the last 10 to 14 years and be more about inclusion and national celebration.

Below is a breakdown where I highlight some of those years to show how the movement has developed over time.

Interesting that 2010, Closing the Gap is taking directly from a government policy and then 2011 points the finger for change back towards our own mob highlighting Noel Pearson’s call for reciprocity, which at the same time takes away from government responsibility and obligation and then this year we are all fighting for the same Australian identity as the government makes a call supporting constitutional reform.

These are meant to be our celebrations as Blackfella’s separate to and unique from government policy are they not? Have a look at the NAIDOC themes from 2000 to 2009.

This is now getting really interesting because here we see that the fight is well and truly still on during this period, look throughout the early 2000s and you see the theme is about independence and unity with struggle and recognition as the priority – 2001 Treaty – Let’s Get it Right, 2002 Recognition, Rights and Reform and 2003 Our Children Our Future.

Then in 2004 we see the emergence of Noel Pearson and Marcia Langton’s philosophies with self-determination – Our Community Our Future Our Responsibility admonishing government accountability and putting the emphasis back on our own under-resourced communities by making them responsible against all odds.

The NAIDOC themes for the period from 1990 to 1999 is also interesting:1999: Respect (Alice Springs); 1998: Bringing Them Home (Broome); 1997: Gurindji, Mabo, Wik – Three Strikes for Justice Celebrating the 30th Anniversary of the 1967 Referendum (Brisbane); 1996: Survive Revive Come Alive (Adelaide); 1995: Justice Not Tolerance (Perth); 1994: Families Are the Basis of Our Existence – Maintain the Link (Melbourne); 1993: Aboriginal Nations – Owners of the Land Since Time Began Community is Unity (Darwin); 1992 Maintain the Dreaming – Our Culture is Our Heritage (Canberra); 1991 Community is Unity – Our Future Depends on Us (Sydney) 1990 New Decade – Don’t Destroy, Learn and Enjoy Our Cultural Heritage (Tasmania).

Here we see what I recognise as my own thoughts and belief systems as a Kamilaroi before our people became corrupted by assimilation and government policy, which makes you question and understand that with the 2000s came a massive Cultural shift for our mob by no longer understanding fully the fight and importance in realising the dream and connection with our old people.

It is here I believe we are witnessing the emergence of the new Aboriginal middle-class with opposing values who, during the 2000s, found the mechanisms toward asserting their leadership over us. The policies of today and voices of our leaders are a far cry from 1995 Justice Not Tolerance, 1994 Families Are the Basis of Our Existence – Maintain the Link, 1993 Aboriginal Nations – Owners of the Land Since Time Began – Community is Unity and 1992 Maintain the Dreaming – Our Culture is Our Heritage.

In the 1980s we see a strong political voice and call for justice, 1981 Sacred Sites Aboriginal Rights – Other Australians Have Their Rites, 1980 Treat Us to a Treaty on Land Rights and the classic call to justice 1987 White Australia Has a Black History.

The themes from 1972 to 1979 also reflect where we as a Peoples were at during that time.

When you consider the attacks against our communities, the call to no longer teach our languages in the schools, the Northern Territory Intervention, the youth suicides and incarceration rates, the homelessness and poverty have we really advanced from 1972 and Advance Australia Where?

Really interesting when you consider this was the time where our people first gained entry into the public service and the universities, we were still Murri, Koori, Noongar, Palawa and Yolngu but about to become Aboriginal and Torres Strait Islander, but then even worse, Indigenous.

This is where we saw a Cultural fight for unity and justice become an Aboriginal industry. Just how many non-Indigenous managers, academics and bureaucrats, as well as our own have managed to pay off mortgages and send their kids to private schools through this industry over the last 42 years all while our people continue to struggle?

And 42 years later after all this education and celebration and fight and struggle we still have a Prime Minister that only last week declared Australia was ‘unsettled’ before British colonisation.

The amazing and strong Cultural woman that is Senator Nova Peris, the first Aboriginal woman to be elected to Federal Parliament, said Mr Abbott’s comments were ‘highly offensive, dismissive of Indigenous peoples and simply incorrect’.

‘British settlement was not foreign investment. It was occupation,’ Senator Peris said. While, guess who? Warren Mundine comes out and dismisses the comment as ‘silly’. Really Mr Mundine? A Prime Minister for Aboriginal People who slashes all our services, takes our government agencies from hundreds to five and oversees everything we do through his own cabinet watching over the largest suicide rates of young people in the world still believes in Terra Nullius and you pass it off as silly?

Mr Mundine went on to say ‘I know his heart is in the right place’ but Mr Abbott was sometimes guilty of ‘rambling on’. If I was him I would have said that the nation was built on foreign investment since 1788 and left it there. We all know Australia was full of people living here when the British arrived.’ Not just living here Mr Mundine but responsible for one of the most sophisticated land managed estates the world has ever seen.

What is ‘silly’ is that a written account of this complex and multi-layered form of understanding biodiversity and sophisticated land management was documented in The Greatest Estate on Earth, a book which won the 2012 Prime Minister’s Literary Award for best Australian history.

A book our current Prime Minister has obviously never read or even cited which again highlights just how ridiculous and hypocritical this government is.  Before white settlement Indigenous people had managed the Australian landscape to the point it resembled an English estate, according to historian and writer of The Greatest Estate on Earth, Professor Bill Gammage.

Professor Gammage, also featured in the ABC mini-series, First Footprints which highlighted not the 50,000 or 60,000 years of pre-colonisation but 80,000 years of people who have inhabited, managed and lived on this land.

The title of Professor Gammage’s book comes from his discovery English settlers all over Australia likened the land to the manicured estates of their mother country. Not only were our people intellectually superior in knowing the world was round thousands of years before Whitefellas we also actively managing an estate that covered an entire continent and ensured self-sustainability for tens of thousands of years. No other people on the face of the earth have managed such a feat and it is one of the greatest achievements in science, land management and in understanding biodiversity and the environment ever seen.

But what our Prime Minister has demonstrated just last week is what we have all had to live with over the last 200-odd years and still endure currently in our classrooms, our universities, and that is we are still living with ignorance and misunderstanding.  We continue to be a people whose belief systems and way of life is dismissed and we are not given any sense of equality and respect.

So please this week, in respecting those living memories of those who fought for this country, our Aunties, Uncles, Mothers, Fathers, Grandmothers and Grandfathers, please don’t let the emotional blindness of nationalism stop us connecting to those who fought much earlier and are no longer part of our living memory.

I am talking about the old people, in our Kamilaroi language, the Maran dhinabarra, who are no longer with us but who fought and died in defence of this great land, against what Senator Nova Peris, rightly called, ‘not settlement’ but ‘occupation’.

– Dr Woolombi Waters is a Kamilaroi language speaker and writer and is a lecturer at Griffith University. He writes a weekly column for the National Indigenous Times. E-mail: woolombi.waters@nit.com.au